The staging of next month’s International Masters Squash Open in Orlando, USA, highlights the growing use of all-glass squash courts by event promoters around the world.

The new event, which has attracted wide interest from the worldwide Masters fraternity, will be staged on a four-glass-walled court erected alongside the Orlando Eye at i-Drive 360, Orlando’s new $250 million entertainment destination which attracts more than 120,000 visitors per week (see artist’s impression below). 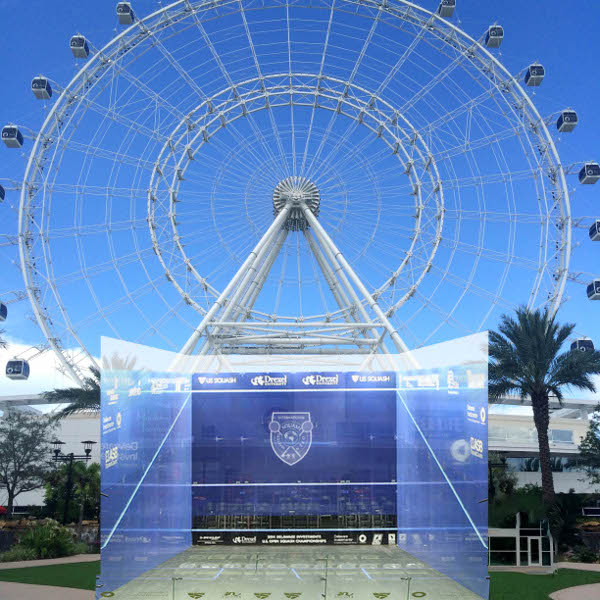 The Orlando Masters is the latest international squash event to exploit the multiple benefits of using a portable all-glass court which can be erected almost anywhere – not only providing greater spectator access and enhanced broadcast potential, but also the unique opportunity to showcase a location or city.

“Glass courts have revolutionised the presentation of our events to the point that we are no longer limited to conventional squash facilities as we were in the past,” said World Squash Federation President N Ramachandran. 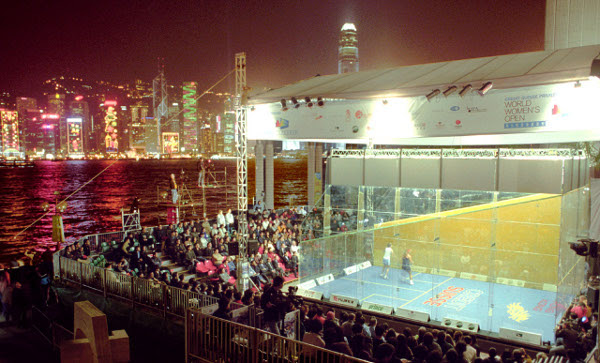 “One of the first such presentations, with the court alongside the Great Pyramid of Giza in Egypt, made headline news around the world – since when we have seen glass courts in the main square in Seoul in South Korea; overlooking the waterfront in Hong Kong (pictured above); by the iconic Ferry Building in San Francisco; and on the Bund waterfront in Shanghai – all spectacular settings.

“Furthermore, there is a large array of inside options from arenas to other exciting sites. We have taken squash into Frankfurt airport, New York’s Grand Central Terminal as well as some of world’s biggest shopping malls (see picture below). 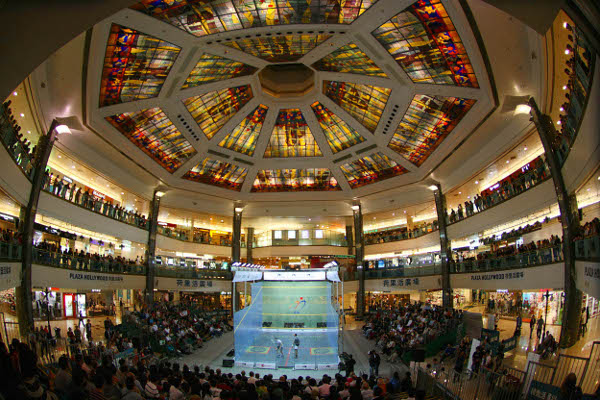 “There are various iconic locations in Tokyo where television and still images of a state-of-the-art all-glass court showcasing the Japan capital would be seen around the globe should squash join the 2020 Olympic Games programme.

“Whether courts are located inside or out, innovations such as sidewall entry that enhances broadcast still further, LED out-of-court lines, cool air ducting, SquashTV production and general presentation, have ensured that squash can now be considered a mainstream media sport,” added Ramachandran.

Record numbers exposed to Squash in 2015