Against expectations, USA clinched both team gold medals in the XVIII Pan American Games Squash Championships in Peru, becoming the first country to achieve the team double since hosts Canada 20 years ago in 1995.

Furthermore, by leading the country to a successful defence of the women’s team title, world No.8 Amanda Sobhy clinched a third Games gold medal at the Villa Deportiva Nacional Videna in the Peruvian capital Lima – added to her individual and women’s doubles title triumphs – thereby replicating her historic triple gold medal success in the 2015 PanAm Games in Toronto.

The top-seeded US women opened proceedings on the final day of squash action in Lima with a 3/0 victory over 3/4 seeds Mexico to set up a repeat of the 2015 final against No.2 seeds Canada. The finals were poised with two rematches of the women’s singles semi-final match ups. Amanda Sobhy put Team USA on the scoreboard first with an 11-9, 11-8, 11-7 win over Hollie Naughton. Olivia Blatchford Clyne then sealed gold courtesy of a marathon 15-13, 21-19, 11-7 victory against Samantha Cornett.

It was with her younger sister Sabrina Sobhy that Amanda won doubles gold, and Sobhy junior would have played the third match in the team event had it been required.

“It’s pretty special for us,” said Amanda. “I mean, not many people get to say that they compete with their family members. This is Sabrina’s first Games, and we’re playing not just for us but for our family and country. It can’t get much better than that.”

“We very much had a ‘pressure is a privilege’ mentality,” Blatchford Clyne said. “It was quite special to know that you’re the hunted, and, instead of fearing that, we chased after our goals. We approached this tournament with a ‘so much to gain’ rather than a ‘so much to lose’ mentality.” The jubilant US squads celebrating above

While the women decisively fulfilled their top seeding, the 3/4 seeded US men had to put in two breakthrough performances against respective gold and silver medal favourites Mexico and Colombia.

Led Cesar Salazar, top-seeded Mexico earned a 1/0 semi-final lead over the US when the by world No.21 defeated American No.1 Todd Harrity 11-8, 11-8, 11-7. At the No.2 position, Cesar’s twin brother Arturo earned an early advantage over Chris Hanson by taking the first game 12-10.

However, the two-time American champion then put together a three-game comeback, surmounting deficits in the third and fourth games to level the score 10-12, 11-4, 11-7, 14-12. Team debutant Andrew Douglas, a 20-year-old making his first appearance in the Games, then stepped up in the biggest match of his career to date, coming back from 2/1 down against former world No. 35 Alfredo Avila to punch Team USA’s ticket to its first ever men’s team final.

The final against second seeds Colombia had a similar rhythm as Harrity lost against 2015 gold medallist and world No.9 Miguel Angel Rodriguez in a close four games. Once again, Hanson gave the US new life with a 3/0 win over Juan Camilo Vargas to level the score at one-all. Douglas then sealed the historic result by defeating Andres Felipe Herrera 11-4, 6-11, 11-6, 11-8.

Harrity and Hanson celebrate their second unexpected gold medal run of the tournament, following up their men’s doubles success as 3/4 seeds this weekend. Hanson praised his teammate Douglas for his mature performances in high pressure situations.

“I am still in utter shock,” Hanson said. “I wish I had his composure when I was twenty. It’s just unbelievable what he did tonight and what we’ve done as a team. I’m speechless.”

Harvard graduate Sobhy became the first woman to win individual gold in successive Pan Am Games when she beat her US team-mate Olivia Blatchford Clyne in a repeat of the 2015 final in Toronto. Sobhy (pictured above on the podium) suffered a career-threatening Achilles injury two years ago which resulted in a 10-month layoff. But the 26-year-old from New York, the highest-ranked US-born player of all-time, has bounced back to her best – dismissing world No.19 Blatchford Clyne 7-11, 11-5, 11-7, 11-8 in 33 minutes in the gold medal playoff at the Villa Deportiva Nacional Videna in Lima.

It was a historic first squash gold medal in the Games for hosts Peru when top seed Diego Elias defeated Colombia’s defending champion Miguel Rodriguez 11-6, 7-11, 12-10, 11-8 in 65 minutes in the men’s final. 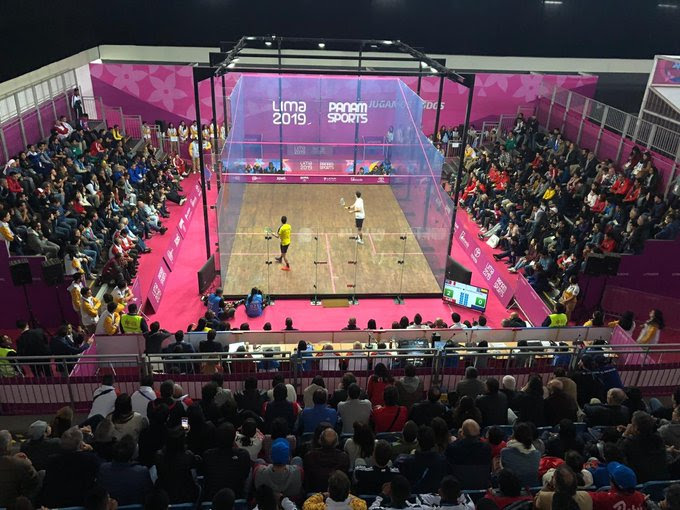 The triumph – before a jubilant and packed partisan crowd at the Videna venue (pictured above) – was revenge for Elias’s defeat in the 2015 final, when former British Open champion Rodriguez won his second successive singles gold medal.

The victory also marked the 22-year-old Peruvian’s first ever win over his 33-year-old regional rival from Bogota – the highest-ranked South American of all-time – in seven meetings since 2014.

Bronze medals went to Mexican Cesar Salazar and Argentina’s 5/8 seed Robertino Pezzota, a 36-year-old from Rosario who was the only player to be making his fifth successive Games appearance since making his debut in 2003 in the Dominican Republic. (Medallists pictured below, L to R: Rodriguez, Elias, Pezzota & Salazar) After success in the women’s singles in the XVIII Pan American Games in Peru, USA added two further Squash gold medals to its Lima haul after title triumphs in both the Men’s and Women’s Doubles events.

US women’s No.1 Amanda Sobhy added to her personal gold collection by partnering her younger sister Sabrina Sobhy to a straight games victory in the women’s doubles final at the Villa Deportiva Nacional Videna in the Peruvian capital.

The top-seeded Sobhy siblings (pictured below) successfully retained the title won four years ago in Toronto by Amanda and former world No.1 Natalie Grainger when they beat Canadian pair Samantha Cornett & Danielle Letourneau 11-10, 11-8 in 24 minutes. 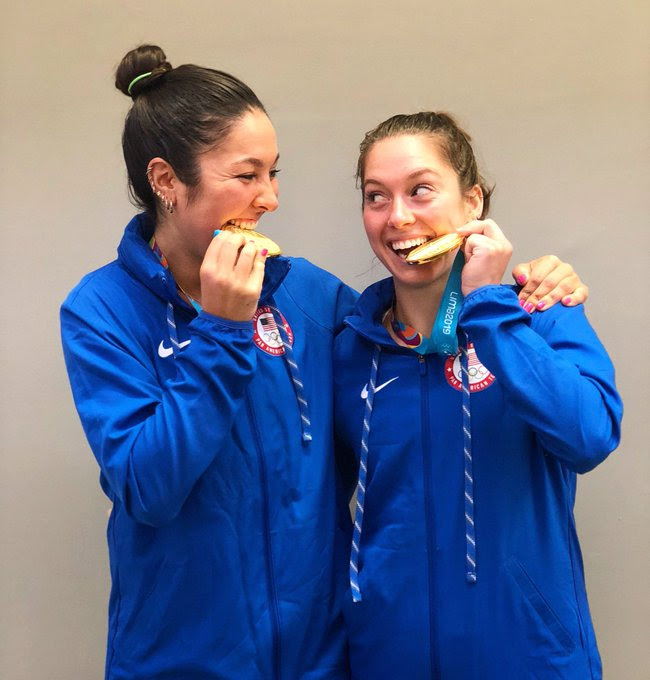 Sobhy senior later told her Twitter followers: “Gold medal with the sis in the women’s doubles!!! Bringing this one home to the Sobhy household!”

USA then struck gold in the Men’s Doubles when Chris Hanson & Todd Harrity recovered from a game down to overcome Canadians Shawn Delierre & Nick Sachvie 6-11, 11-5, 11-8 in 46 minutes.

The 3/4 seeded US pair made their breakthrough in the semi-finals where they despatched the second-seeded hosts’ Diego Elias & Alonso Escudero in straight games.

Colombia claimed their first squash gold medal of the 2019 Games when Catalina Pelaez & Miguel Rodriguez justified their top-seeding in the Mixed Doubles by seeing off Diana Garcia & Alfredo Avila 11-10, 11-4 in the final.

The unseeded Mexican pairing claimed their surprise place in the final with successive victories over the No.2 seeds from Argentina and US duo Olivia Blatchford Clyne & Andrew Douglas, one of the 3/4 seeds, in the semi-finals.