While Nicol David made it through to her seventh successive Hong Kong final, Raneem El Weleily, James Willstrop and Karim Darwish all secured their firsts after the semi-finals at Kowloon Cultural Centre …


Seventh heaven for Nicol but first finals for Raneem, James and Karim

After a day of upsets and revenge at Hong Kong Squash Centre  on quarter-finals day. some of the semi-final lineups at the Kowloon Cultural Centre on the harbourside overlooking Hong Kong Island, had an unfamiliar feel to them, particularly the women’s semi-finals where top seed and six-time defending champion Nicol David was the only one of the original top eight seeds remaining. 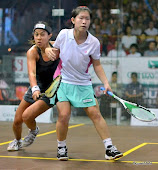 Hong Kong’s Annie Au delighted the home crowd as she took the first game off the overwhelming favourite, but David struck back to take the next three to reach a seventh successive Hong Kong final.

“I knew it would be tough, that the crowd would get behind her,” said the victor, “and she played really well in the first. I knew I had to tighten up and find my lengths from the second and I managed to do that.”

There she’ll meet Raneem El Weleily, the tenth seed who overcame Malaysia’s Low Wee Wern in a high-quality match, coming from 7/1 down in the fourth game to clinch the win. 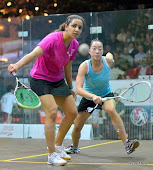 “It’s very hot on there, difficult to breathe even for us Egyptians and I could see she was suffering too,” admitted El Weleily. “She got a good lead in the fourth, I’m glad my mum wasn’t watching I would have given her another heart attack! Obviously I’m really pleased to get through to the final, especially in such a wonderful setting, I just hope I can play my best …”

The men’s had more representation from the top echelons but a new champion was already guaranteed after five-time champion Amr Shabana went out in the quarter-finals.

James Willstrop and Gregory Gaultier took an hour to play out two tough, tough games, the Englishman winning both 11/9 before taking the third in double quick time to reach his first Hong Kong final, denying Gaultier a fifth in a row after the Frenchman finished runner-up from 2007 to 2010.

“Today, the conditions suited me better,” said Willstrop, “he also had a very hard match yesterday, that took a lot out of him. I got to the semis a few times, but today, getting to the final, and trying to put my name alongside the prestigious names on that trophy… It’s pretty special.” 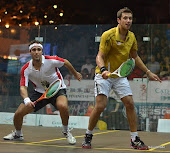 It will be a first final too for Karim Darwish, after the Egyptian continued his impressive form this week, ending the run of Malaysia’s Azlan Iskandar in just 37 minutes.

“Like I said yesterday, at this stage of the competition, I really wanted to spend as little time on there as possible, so a 3/0 is perfect for me,” said a satisfied second seed. “But it was not easy, Azlan is a tough competitor even if he wasn’t at his best today.”

Seven in a row for Nicol, a first for James