World Squash Federation (WSF) President Jacques Fontaine believes that squash’s recent Showcase at the Buenos Aires Youth Olympic Games 2018 will have left a lasting impression on both the population of Buenos Aires and the Olympic family following a successful week of action that saw over 25,000 people witness squash in the flesh. Over 2,000 children tasted their first experience of squash during the week through introductory sessions on a miniature outdoor activation court – while the Showcase all-glass court, situated in the heart of Technopolis Park, attracted almost 5,000 visitors each day with many witnessing squash for the first time in their lives.

Joining the thousands of locals to watch the squash showcase were high-profile IOC members such as HRH Tunku Imran, President of the Commonwealth Games Federation, and Olympic Games Executive Director Christophe Dubi, who had the chance to step onto court and experience the sport first-hand (pictured below) – an experience shared by hundreds of lucky locals who were given the chance to play a suite of new interactive games on the centrepiece court. 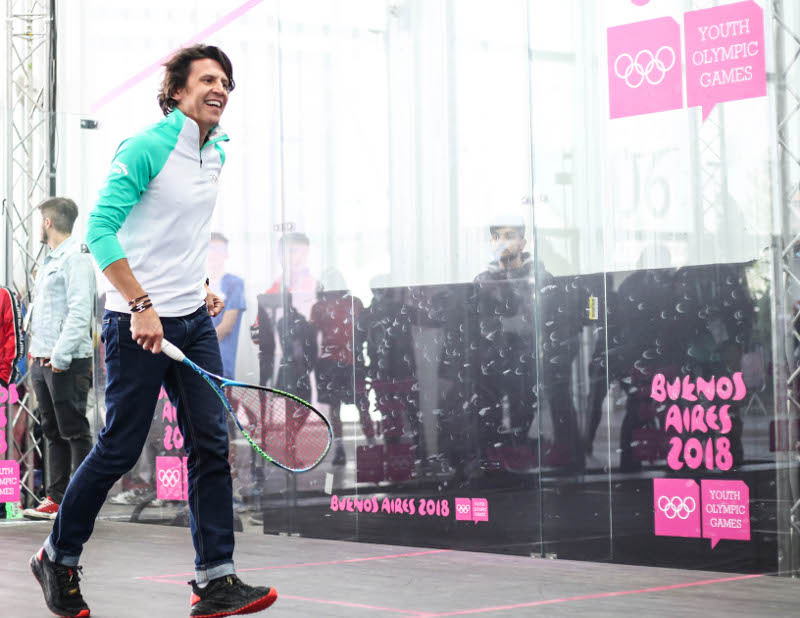 “The Squash Showcase in Buenos Aires has exceeded all expectations and we are delighted with the reaction from the local population, the participating athletes and the wider IOC family,” said Fontaine.

“Along with enjoying what could be a once-in-a-lifetime experience for many, our athletes embraced the local spirit and it was fantastic to see them engaging with young fans and to see so many smiles on the young schoolchildren’s faces.

“To have so many children step onto a court for the first time is very encouraging for the development of the sport in Argentina. The number of people stopping to watch in awe at both the athleticism of our athletes and the eye-catching displays of the interactive court have shown us that, as a sport, squash can offer something different.

“The feedback we have received so far has been universally positive and we now look forward to working with all parties to show that squash can replicate this success at Paris 2024.”

In parallel to the Showcase event, squash was also represented amongst wider Olympic initiatives during the Youth Olympics, with Maria Toorpakai Wazir, a professional player from Pakistan, sharing her remarkable story during a panel session at the inaugural Olympism in Action Forum on the same day that Shahd Bshara, a young squash player from Israel, was chosen as one of four athletes from around the world to form the first Sport at the Service of Humanity Young Leaders Mentoring Program.

Inspired by their experiences at the event, all 38 athletes participating in the squash showcase (pictured above) also contributed to the on-going SquashFORWARD initiative by participating in sessions led by Mexico’s PanAm Games Gold Medal winner Samantha Teran – sharing their thoughts and opinions on a host of topics covering all aspects of the game.

Their feedback will be combined in the following months with that collected during previous sessions conducted over the summer to formulate a forward-looking roadmap.