Double Dutch Doubles Surprises On Day One In Manchester

Unseeded Dutchman Dylan Bennett & Piedro Schweertman caused the biggest shocks on the opening day of the WSF World Doubles Squash Championships in England when they upset two seeded pairings in the Men’s event at the National Squash Centre in Manchester.

Both making their international doubles debuts, Bennett and Schweertman first despatched Nafiizwan Adnan & Ivan Yuen, the eighth seeds from Malaysia (see picture below), then defeated India’s No.9 seeds Vikram Malhotra & Mahesh Mangaonkar in straight games to boost their chances of qualifying for the quarter-final stage. 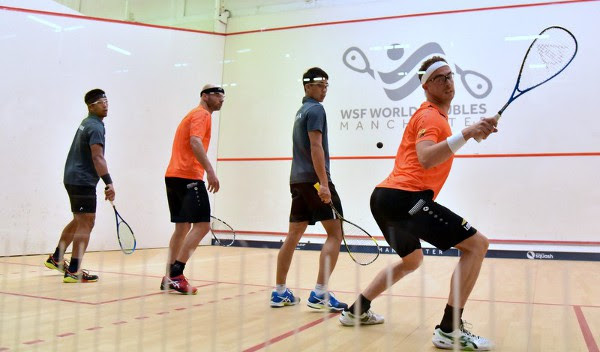 Elsewhere in Pool A, Scottish favourites and defending champions Alan Clyne & Greg Lobban also won twice – and will face the Dutch pair in the second pool round.

After making her debut in the 2004 Championships in India, Grinham boasts a record three World Doubles gold medals – and is competing both in the Women’s and Mixed events in Manchester.

Duncalf, who boasts over 100 caps for England, is making her first appearance for her country for over two years. Partner Waters went on to win a third match today, paired with Daryl Selby in the Mixed event.