David Defeated While France Close In On World Games Gold

France will go for gold in both the men’s and women’s World Games squash finals in Poland tomorrow (Friday), but the day’s semi-final headlines were grabbed by Hong Kong’s Joey Chan who upset three-time gold medallist Nicol David on the all-glass showcourt at the Hasta la Vista club in the city of Wroclaw, bringing to an end the illustrious Malaysian’s unbeaten 16-match World Games run since 2005.

David, unbeaten by a fellow Asian in 15 years*, was meeting world No.19 Chan – an opponent to whom she had only ever conceded a single game since a World Games clash in 2009 – for the ninth time.

The second seed took the opening game and when 3/4 seed Chan drew level, David again asserted her dominant game to pull ahead 2/1. 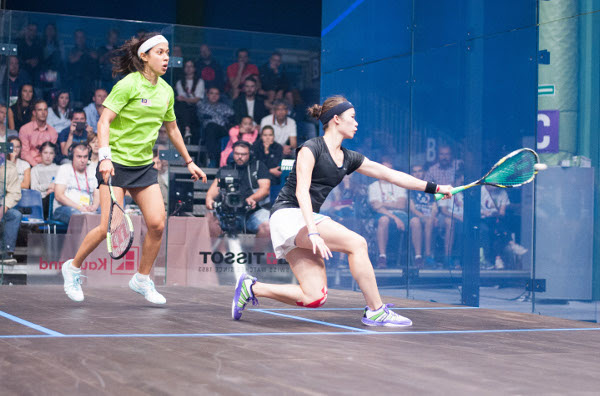 “I can’t believe it,” said the Hong Kong No.2 (pictured above in action with David). “Nicol has always been my idol – she’s a role model for all squash players.

“I think I’ve been getting close to her recently – but to finally beat her for the first time is amazing. I am very happy.

“Nicol always begins strongly – she was very sharp today and pushing up the pace. I had to concentrate on controlling the ball – I had to slow it down.

“At 10-5 match-ball I was a little bit tense – I was seeing the finishing post. But I was quite relaxed during the match – under no pressure.

“For this event, I feel I am fighting for my country!”

Hong Kong national coach Faheem Khan (pictured below, left, advising Chan) added: “We talked this morning and I said to her if you’re really going to beat her you have got to stick to your game plan. You have to be patient. 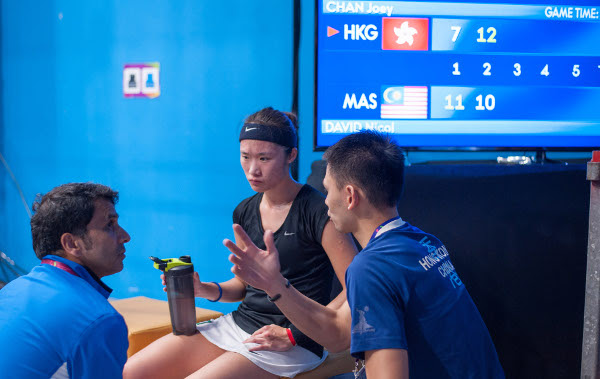 “Her patience was really good – and it worked!

“There was no pressure on her and she played really well – with confidence.

“She will definitely benefit from this win.”

Chan will face top seed Camille Serme in the final after the world No.3 from France beat surprise opponent Fiona Moverley, a 5/8 seed representing Great Britain, 11-6, 11-5, 11-7. “When I saw Nicol had lost, I was a little bit nervous,” said Serme (pictured above with Moverley) later. “I didn’t want to be another seed to lose in the semi-finals!

“Even though I’ve beaten her twice before, I didn’t take Fiona lightly – she has been tough on other players this week,” added the 28-year-old from Creteil who has yet to drop a game in Wroclaw.

“I was surprised that Joey beat Nicol – but it is the middle of summer and anything can happen. I don’t think Nicol will be too worried. I was looking forward to playing her – she’s the only player I have never beaten!

“It’s important for France to win medals here so it’s great that Greg (Marche) and I are now both guaranteed medals. It would be good for our Olympic 2024 bid if we did win gold – especially if Paris gets it.

“Poland has been very welcoming to us all – it’s just like being in the Olympics.”

France are certain of at least two silver medals after 5/8 seed Gregoire Marche avenged three successive defeats by 20-year-old Peruvian Diego Elias to beat the 3/4 seed 11-7, 11-4, 11-8 in 42 minutes in the first men’s semi-final. “This is a new event for most of us and it’s special to be part of the French team at the Games,” explained the French No.2 (seen above with Elias) who ousted the No.2 seed in the previous round.

“There are no ranking points at stake and you’re not alone on court – so you feel more relaxed. I haven’t felt any stress this week – I must remember to try and feel this way when I’m playing my next PSA event!

“I’ve been playing well but as I hadn’t played much before I got here, I didn’t know what to expect.

“I’ve lost to Diego twice this year so I knew it would be a tough battle,” added the world No.23. “But I learnt a lot from those losses. It’s good to beat these young guys!

“It would be perfect to have a French final – but whatever happens I will be going for gold!”

In the final match of the night – in front of an exuberant near sell-out crowd surrounding the showcourt – Simon Rösner put paid to an all-French men’s final when he recovered from a game down to beat Mathieu Castagnet 9-11, 12-10, 11-5, 11-7 in 69 minutes.

The German world No.11, a runner-up in the 2013 World Games in Colombia, made a slow start – and was shaky in the second when he squandered 9-4 lead to see Castagnet recover to 9-all, then 10-all, before closing out the game in the tie-break to draw level. 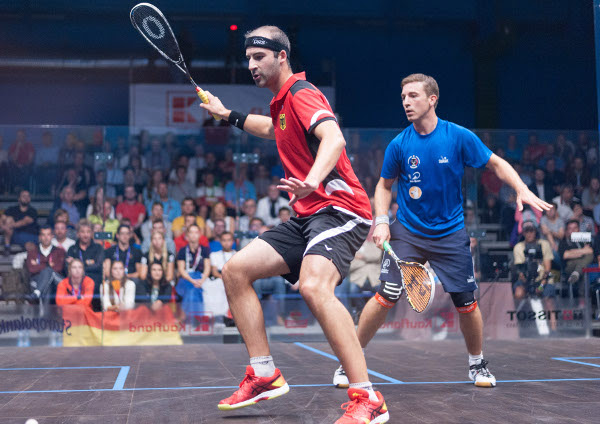 “I felt a bit flat at the beginning of the match but managed to get out of trouble and started playing to my strengths,” explained the 29-year-old from Paderborn (pictured above in semi-final action). “Luckily I was able to put him into the corners.

“You have to realise that that for most of us this is the first event after our summer break. But it was a really good match – and to be fair to Mathieu he’s had a lot of distractions recently, including surgery, weddings, stag events, etc!”

When it was pointed out that his victory prevented an all-French final, Rosner replied: “Somebody had to stop the French! Now there is a German in the final!

“There was a great atmosphere in the arena tonight – it was fantastic to play in front such a big crowd. We don’t often get the chance to play on such a big stage as this – so we have to make the most of it.”

* Nicol David‘s last defeat by an Asian player was in October 2002 when she lost in straight games to the former Hong Kong number one Rebecca Chiu in the Asian Games final in Korea.

Palmer ‘Excited’ To Be Back In World Teams Action In France