It was a day of upsets in the WSF Men’s World Team Squash Championship in Washington DC where Spain, Kuwait and Scotland outplayed higher-seeded opposition to boost their chances of better-than-predicted finishes in the biennial World Squash Federation event taking place in the USA for the first time.

Scotland claimed the biggest scalp when the ninth seeds overcame former runners-up New Zealand, the event’s original fifth seeds who earlier had lodged a successful appeal to upgrade their seeding to four.

Competing in the championships for the 19th time in a row since 1981, Scotland took an early lead when Edinburgh-based world No.124 Rory Stewart beat Kiwi Evan Williams, ranked 31 places higher, 11-3, 10-12, 12-10, 11-1 in 61 minutes. Stewart had only faced his opponent once before – exactly three years ago – and lost in straight games.

“I bet he doesn’t even remember that match,” said the jubilant Scot afterwards. “But I do, as it was the very first match I played on the PSA Tour, and I was determined to get my revenge!”

It was a similar story in the second match when the second-ranked Scot Alan Clyne took on Campbell Grayson, a 33-year-old from Auckland whose recent run of form earned him a career-high world No.25 ranking this month.

Clyne, the world No.39, was looking for his first win over Grayson after three defeats and opened up a 2/0 lead. But Grayson soon drew level as the Scottish momentum seemed to have waned. Clyne (seen diving below) was far from done, however, and dropped just four points in the decider to claim the 11-8, 11-4, 7-11, 10-12, 11-4 victory after 84 minutes which gave Scotland the shock outcome. 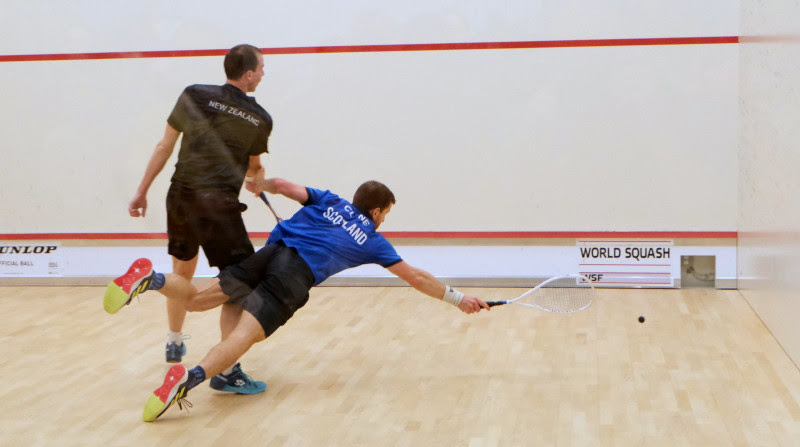 There was consolation for New Zealand in the third match when Paul Coll beat Scottish number one Greg Lobban 3/0.

“We know that the guys perform well when they play for Scotland,” said coach Paul Bell afterwards. “When we saw the draw, we were very happy with it. We knew we had a chance. We should be confident – and we are confident playing most of the teams here. The three-man team format is really good – it works well for us.

“We knew that if we could get off to a good start with Rory, which we were confident about, that might turn it in our favour with Cliney going on next. He’s been with us for a month of training in Edinburgh. It’s not often you get the chance for something like that, we took advantage of it – and it seems to have paid off!”

It was on the all-glass showcourt at Squash on Fire that eighth seeds Spain produced their breakthrough result – beating Germany, the fifth seeds, for the first time since 1989.

The opening match came to an unfortunate conclusion midway through the fourth game when an ankle injury forced German Rudi Rohrmuller to concede the match – handing a 7-11, 11-5, 11-4, 4-2 (ret.) win to Spaniard Carlos Cornes. According to the rankings and previous form, Germany’s Raphael Kandra was expected to draw level. But, despite only one previous win over his opponent in six meetings since 2013, Spaniard Iker Pajares (pictured in action above) battled hard for 64 minutes to claim an impressive 11-8, 9-11, 11-8, 11-7 upset to ensure Spain a place in the top 12 play-offs.

It was the turn of the two teams’ legendary top strings to take to the court next – German Simon Rösner celebrating the pair’s 20th meeting over the past 14 years by beating Borja Golan 11-3, 11-6, 11-9.

Pajares was delighted with his win: “It was a very good win for the team and for me as well. I felt very confident and very sharp on court. But we still have one more match tomorrow against Argentina.

“I wasn’t calm, we had to win this match and I made it. We had Carlos in a very good shape as well, he won a tournament a few weeks ago. We are all playing our best squash I think and we want to have a good tournament, we’ve trained very hard for it, so hopefully we can make it this year.”

Spanish coach Jonas Gornerup pointed out the significance of his players playing for their country, rather than for themselves as in the regular Tour events: “Iker has only beaten Rafa once – and it was in a team event, the Europeans, when he was wearing the Spanish shirt.

“The atmosphere in our team is unbelievable. I’ve been with these guys now for four years – and it’s like being on holiday in Barbados! The team spirit is so good. Our team is led by Borja, who’s the most modest guy in the world, and they all look up to him – it’s been like that for a few years. When he plays well, they play well – it motivates them.

“We’ve got a strong group of players – the four we’ve got here and Bernat (Jaume) who’s back at home.

“We still have to beat Argentina tomorrow to become top of the group – and then everything is by draw so let’s see who we get!” It was the second upset win in two days for Al Muzayen, the gifted former world No.33 (pictured in action above) who currently languishes at 512 in the rankings after limited activity due the sporting unrest back in his country.

“We’ve had a three-year stop back in Kuwait, and that was very, very bad for us – our players were not able to compete in international competition. We are now back and we want to get our players back in the rankings.”

Second seeds England were given a fright by British rivals Wales when the 11th seeds’ second string Peter Creed fought back from 0/2 down to level the second match against James Willstrop. England captain Daryl Selby had already put the former champions in the driving seat with a 3/0 win over Welsh event first-timer Owain Taylor.

Meanwhile a crunch tie was taking place in Pool F between seventh seeds Australia and Hong Kong – the sixth seeds who were expected to gain their first ever win over the record eight-time champions. The two teams were level at one-all when the top strings Leo Au and Ryan Cuskelly (both pictured above) took to the court – Yip Tsz Fung having put Hong Kong ahead after beating Rex Hedrick, before seasoned campaigner Cameron Pilley levelled for Australia after beating opponent Max Lee.

With so much riding on the outcome, the decider was fiercely contested – left-hander Cuskelly putting the Aussies ahead before Au gained the upperhand to draw level.

But at one-all in the third game, Cuskelly was forced to concede the match as the result of a triceps strain in his left arm.

“I’m happy to be at the top of the pool at the moment, but we didn’t want to win in this way,” said Hong Kong coach Faheem Khan. “I feel really sorry for Ryan that he couldn’t finish the match.

“But we had confidence that we could win tonight – we knew we had a chance. But we didn’t expect to do it this way!”