In a disappointing finals day for British duos at the WSF World Doubles Squash Championships in England, New Zealand retained both the Women’s and Mixed gold medals whilst Australia reclaimed the Men’s title after upsetting the defending champions in the climax of the World Squash Federation event at the National Squash Centre in Manchester.

Kiwi Joelle King was the star of the day, first partnering Amanda Landers-Murphy in the Women’s final to beat English outsiders Jenny Duncalf & Alison Waters (pictured above), fighting back from a game down and saving three match-balls from 10-8 in the decider to win 9-11, 11-1, 11-10 in 46 minutes.

Immediately afterwards, the 28-year-old world No.12 from Cambridge linked up with Paul Coll to face England pair Alison Waters & Daryl Selby in the Mixed final – Londoner Waters celebrating her 109th cap for England but a second silver medal in less than an hour after the Kiwi conquerors grabbed an 11-8, 9-11, 11-6 victory in 47 minutes.

“That was so tough,” said a delighted and relieved Landers-Murphy after her second gold medal since first winning the title with King in Darwin, Australia, a year ago. “We were ahead in all the games, just glad that we could stay strong and keep it together at the end.”

Duncalf, the 34-year-old former world No.2, said: “Losing 11-10 in the third is always quite tough. We did well to win the first and then the second was a bit of a disaster. The third was very up and down and they won it right at the end. They are the defending champions and we knocked out the Commonwealth gold medallists (Joshna Chinappa and Dipika Pallikal of India) so we’re very pleased with that.”

Coll, also a gold medallist for the second time in a year (pictured above in final action), said after his Manchester gold: “We felt good together again today. We dropped off a bit in the second, but managed to get early leads in the first and third, which always takes the pressure off.

“We have a great team spirit in the Kiwi camp. It’s been a tough week to start the season off, but a lot of fun, and we’re obviously delighted to be going back with more gold medals!”

Englishman Selby, like Waters a World Doubles finalist for the first time, said: “We were seeded five so to win a silver medal is a fantastic achievement – to push the reigning world champions as hard as we did is really pleasing. Al and Joelle both did really well to play two matches in a row and we weren’t far away in the end.” “We’ve had a lot of tough matches with them,” said Australian number one Pilley, renowned as the one of the hardest hitters of the ball (pictured below with all fellow gold medallists). “They beat us last year so it was good to turn the tables this time. There were some brutal rallies in the first, but we stuck to our game plan and it worked out, then in the second we continued to execute and they made a few errors which helped our cause.” 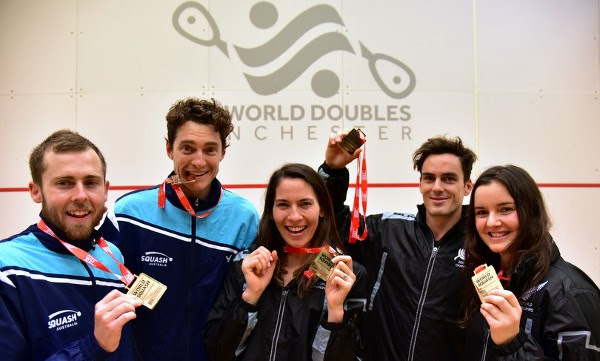 Bronze medals were awarded to the losing semi-finalists – thus, in addition to New Zealand, Australia, England and Scotland, medals also went to India and Wales.