24-year-old Ali Farag recorded one of the biggest wins of his career as he halted the charge of title-favourite and World No.1 Mohamed ElShorbagy to move one step closer to becoming the first home-based player to win the iconic Al Ahram Squash Open NewGiza – the $100k tournament taking place at the foot of the Great Pyramids of Giza – since Ahmed Barada in 1998. 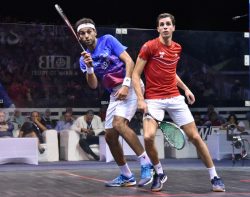 Competing in one of world sport’s most breathtaking locations, Farag – who earned a berth in the last four following the retirement of three-time World Champion Ramy Ashour during their quarter-final encounter – produced a sublime performance to come through in four games and earn a richly deserved win after 70-minutes of high quality squash.

After losing the opening game Farag fought back to level against ElShorbagy and then take a 2-1 lead. Then, with both men giving their all, they traded points in a series of ferocious exchanges as the score reached 10-10 in the crucial fourth. A first match ball went to waste as ElShorbagy mounted a last ditch charge before Farag responded in style and take the game, and with it the match, 14-12. 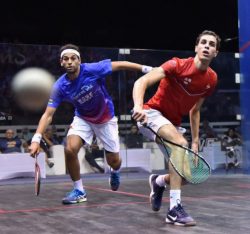 “I have the upmost respect for Mohamed – he’s been the best in the game for the past two seasons hands down,” said Farag.

“I knew that to have a chance I needed to be at my absolute best, but I’ve been preparing well since Hong Kong and got in a big chunk of training before this event that I think made the difference.

“Mohamed can be very intimidating at times with how big he makes himself on court – like any top player does – but I knew the biggest battle today would be mental. I had to match him mentally and that’s what I did.

“Before the event I looked at the draw and knew it would be tough – but names are just names – you go out and play to win. At Motor City Open I had the toughest draw possible and won so I know I just have to believe in myself.” 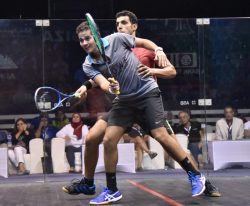 Farag will face compatriot Karim Abdel Gawad  after Gawad saw off second seeded Omar Mosaad in straight games with a performance that underlined his status as one of the most in-form players on the Men’s Tour, reaching his second successive major final after finishing runner-up in Hong Kong last month.

“My season was going well until I got injured pretty badly, my end of the season was terrible in Gouna, and they worked very hard with me to make me fit again, both physically, mentally and in my squash,” said Gawad. 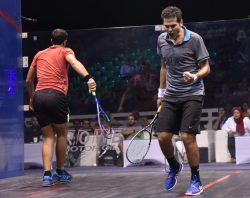 “Omar is such a tough competitor, he is so hard to compete against, and I truly didn’t expect a 3/0. Wining 3/0 against him is just amazing result for me.

“It’s such a dream to come here and play, I remember how I watched the players, and also Robert chatting with the players at the end, and I remember thinking I wanted to be interviewed as well!

“I am looking forward to my match with Ali, we played so many times on the Junior circuit because we are about the same age, we played hundred of times as juniors, and a few times on PSA too! I hope it will be a great match …” 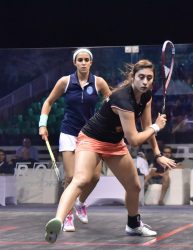 Farag’s wife Nour El Tayeb bowed out of the women’s event at the semi-final stage, losing in straight games to the in-form player on the Women’s Tour this year – Nour El Sherbini.

World No.1 El Sherbini has scythed her way through the tournament so far without dropping a game and she impressed once again to underline her status as the player to beat as she came through 11-7, 11-8, 11-4 in less than 30 minutes. 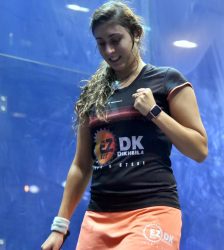 “I was very focused from the beginning today and worked hard not to let her get in front and I’m glad to come through in three games,” said El Sherbini.

“I’ve been dreaming of playing here since I was ten years old and playing in front of the Pyramids and the Egyptian crowd. I’m really proud to be here and have my family and sponsors there to see me play so hopefully I can keep it going now in the final.” 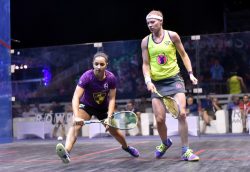 El Sherbini will face Raneem El Welily, the 27-year-old who held the World No.1 spot at the end of 2015, in what promises to be a gripping encounter after she stormed past England’s Sarah-Jane Perry to end non-Egyptian interest in the $100k event.

“I got a bit excited in the second and third, she was playing so well, and I got a bit nervous,” said El Welily. 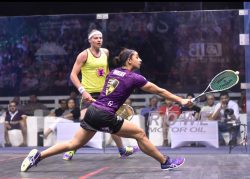 “She is definitely in top form, getting some great wins and she has been playing great all week, so I had to be sharp from the beginning, and after being 8-10 down in the third I’m happy to take it in three.

“I used to come here with my brother and my parents, we were so young then, and I remember we were fascinated by everything, so being here means a lot for me.

“Tomorrow, I hope it’s going to be a great match, she is a good person, on and off court, and the purest soul I know. I’m looking forward to playing my little sister.” 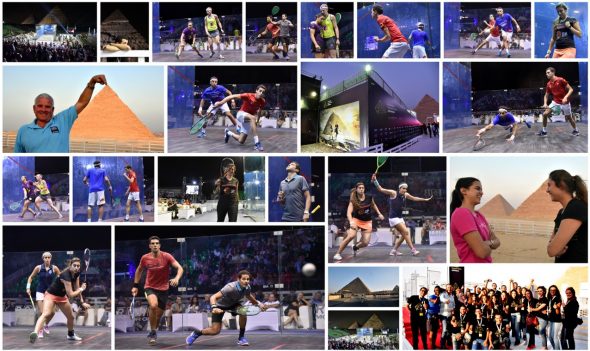 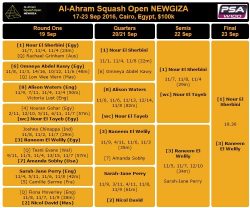 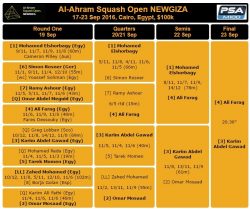