World No.4 Ramy Ashour retained his EL Gouna International Squash Open title against the idyllic backdrop of the Red Sea, beating compatriot and World No.3 Mohamed Elshorbagy 3-1 to seal the championship. 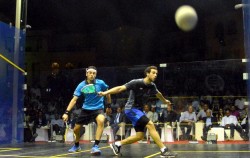 Ashour was in scintillating form as he saw off his younger opponent, who came into the match following an epic 112-minute victory over World No.1 Gregory Gaultier of France in the semi-finals, to win just his first PSA World Series title since he claimed the 2013 British Open.

The maverick Egyptian, who endured an injury-plagued four months from October 2013 – January 2014, looked to be back at his devastating best throughout the entire tournament as he romped to the final without dropping a single game and proved too much for the ever-determined Elshorbagy. 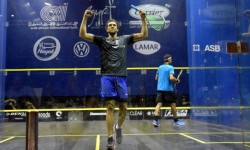 “I’m overwhelmed to win the title and I’m very happy with my performance today – I thought it was a great match.”

Ashour looked to be on his way to a completing a clean sweep after taking the first two games 11-7, 12-10, but it was a match in which the younger Egyptian never gave up and his determination was rewarded when he dug deep to take the third game 11-8.

But Cairo-based Ashour responded in fashion to win a fiercely contested fourth game 11-8 and take the title following 71-minutes of scintillating squash which delighted the packed house in El Gouna.

“Mohamed is one of the most explosive and best players around. He’s got many different attributes and is a threat to all the top players,” added Ashour.

“He’s already a top five player and he’s definitely going to be one to watch but I’m happy to win today.” 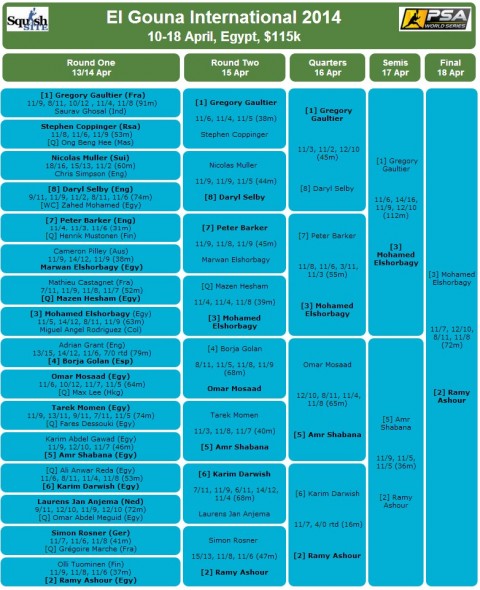