The world’s top two squash players Ramy Ashour and Nick Matthew will contest a dream JP Morgan Tournament of Champions final after prevailing in stunning semi-final showdowns in the PSA World Series event – both of which drew standing ovations from the packed crowd at Grand Central Terminal in New York.

Current world No2 and two-time title-holder Ramy Ashour delighted the crowd, and sometimes even his opponent, with his unique brand of squash artistry on full display in his semi-final match against fourth seed James Willstrop, the title-holder from England. 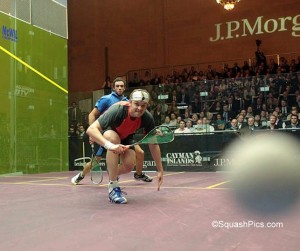 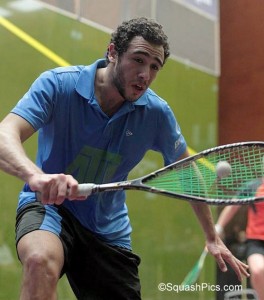 “Ramy was superb tonight,” said Willstrop after losing to his Egyptian rival 11-4, 11-9, 11-8 in a reversal of last year’s final where the Yorkshireman defeated Ashour in three games. “This was the best he’s ever played against me.”

The prodigiously-talented Ashour at his best is an artist creating a canvas of squash shots that few have ever seen before. His palette was of the highest order in the night’s first semi. The defending champion, who played a credible match but not his best, had no answer for the magic coming off Ramy’s racket.

Ashour pocketed the first game quickly. Willstrop mounted a challenge in the second, getting to seven-all before Ashour ran off three straight points to win the game. Down 5-9 in the third, Willstrop edged back to 8-9, with the crowd roaring encouragement in the hope of seeing the match extended. Ashour quelled that hope with two winners to take the game and move into the final.

Before leaving the court, the two players embraced, acknowledging their respect for each other.

“James is one of the most fair and talented players,” said the winner after the match. Referring to the fact that the crowd got especially involved in third game – during which both players applauded each other’s great shots – Ashour continued: “It was intense tonight but the last game especially was fun.”

While the evening’s first match had its share of poetic moments, the second semi-final was drama of the highest order. England’s world No1 Nick Matthew got off to a dominating start against Egypt’s Amr Shabana; he led the first game from start to finish. When Matthew won the second game, it looked as though the sold-out crowd would be on their way home before the evening’s snowstorm was too far along. But two-time Tournament of Champions title-holder Amr Shabanawasn’t ready to call it a night.

Drawing Matthew into several long points, the third game was all Shabana as he played himself back into the match, winning the game. The fourth game saw the lead seesaw back and forth as both players continually raised their level of play. Superb technicians each, the players used every shot in their arsenal to fight for the lead. 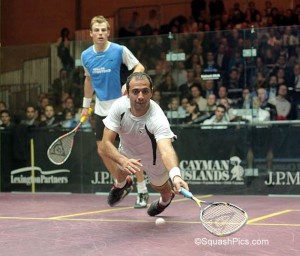 Matthew had two match balls at 10-9 and 12-11; after being denied a let on the first one after catching the back of Shabana’s foot on his way to the ball, Matthew was understandably perturbed. Nonetheless, he regained his composure to draw a rare unforced error from Shabana to have a chance to win the match. But the player who is acknowledged by most of his peers to be one of the great players of all time showed why that is so; Shabana hit a feather drop shot to even the score at 12-all, followed by a cross court winner to go ahead 13-12. A tin by Matthew evened the match at two games apiece, much to the crowd’s roaring delight.

The fifth game was a masterpiece of squash strategy and shot-making by both players. The 32-year-old Egyptian was diving for balls, hitting the floor and still managing to stay in the point. Matthew was stepping forward to volley the ball as far front as he could to keep Shabana behind him. At eight-all, it was anybody’s match; the same was true at nine-all. 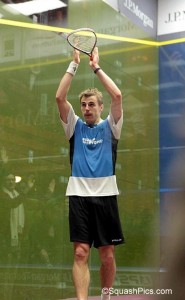 At 10 points apiece, Shabana had to dive once more to scrape a forehand drop before it bounced twice; Matthew was all over the weak return, sliding it down the backhand wall for a winner. This time, Matthew did not let the match ball out of his grasp, hitting a precise backhand drop that produced a rare tin from Shabana.

“This match was a test at every level, of physical and mental capacity,” said Matthew after the match – tired but satisfied. “But that wasn’t surprising, considering I was playing one of the best players of all time.”

In the post-match on-court interview that was part of the evening’s live broadcast on espn3.com, Tournament DirectorJohn Nimick asked Matthew how the evening’s marathon match would affect his readiness for the final against Ashour. “This is what we train to do as professional athletes,” said Matthew. “So there is no reason not to be ready to do this again in 24 hours.”

Ashour, looking ahead to the final earlier in the evening before his opponent had been determined, said, “Tomorrow is the toughest match. It is not so much about the squash; it is about reaching the end of your destination. Tomorrow is about the pressure.”