World number one Ramy Ashour and his world number one predecessor James Willstrop will meet in Thursday’s final of the Kuwait PSA Cup after both celebrated straight games wins in today’s semi-finals of the third PSA World Series squash event of the year at the Qadsia Sporting Club in Kuwait. 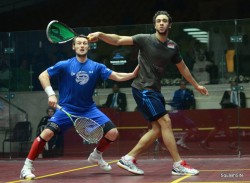 Top-seeded Egyptian Ashour extended his unbeaten PSA World Tour run to 35 matches when he despatched Gregory Gaultier, the No4 seed from France, 11-8, 11-5, 11-2 in 36 minutes.

World No3 Gaultier was in inspired form for the first few points of the match before Ashour upped his game and the Frenchman became increasingly frustrated. By the latter stages of the third game, Gaultier seemed unable to make much effort and slammed his final serve out of the court to give Ashour the match.

The win lined up some further impressive stats for the 25-year-old from Cairo – who is now in his 45th Tour final and one win away from his 30th title.

Asked about the quarter-final match 24 hours earlier against compatriot Amr Shabana, Ashour admitted: “Yesterday was definitely one of my toughest ever matches – both mentally and physically. He’s such a smart player and I’m very proud to have beaten him.” 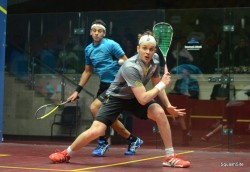 England’s world number four Willstrop, the defending champion, boasted a 7-2 head-to-head record over his opponentMohamed El Shorbagy going into the match – but had lost to the Egyptian in their previous meeting in December’s PSA World Championship in Qatar.

The 29-year-old from Leeds was in commanding form in the opening game – but 22-year-old Shorbagy came back in the second and led up to 10-all. But Willstrop increased his lead to 2/0 after winning two standout rallies. 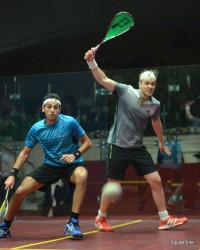 “Mohamed has been showing world top four/five form for some time now – his performance in the World Championship was very special,” said the Englishman later.

“I had to bring out my A-game to beat him.

“It’s quite wonderful to be in another Kuwait final.

“Ramy’s as unique as it gets,” added Willstrop, now in his 35th Tour final. “But he’s won enough tournaments now – it’s time he was stopped.”