After a dramatic Squash semi-finals day in the Asian Games in Indonesia, both Malaysia and Hong Kong China are certain to strike gold in Sunday’s finals at the Gelora Bung Karno Sports Complex in Jakarta.

Malaysian teenager Sivasangari Subramaniam continued her giant-killing run in her maiden appearance in the Games by taking her second world top 20 scalp in 24 hours. After despatching top seed Annie Au in the quarter-finals, the 19-year-old world No.40 battled for 41 minutes to overcome Joshna Chinappa, the world No.16 from India, 12-10, 11-6, 9-11, 11-7 to secure a surprise place in the women’s final.

The 5/8 seed from Kedah will now face compatriot Nicol David, the illustrious former world number one who reached the final for the sixth time in a row after seeing off Indian rival Dipika Pallikal Karthik 11-7, 11-9, 11-6. “I really can’t believe it,” said Subramaniam . “First beating Annie and then Joshna today – both of them are top players on the world tour. It feels really amazing to get into the final in my first Asian Games.

“I know I had nothing to lose today and even though Joshna came back really strongly to take the third, I just kept my focus and did what I needed for the win.

“But it’s not the end yet. I have another big match against Nicol. It will be my first time playing her and it’s really like a dream come true but I just have to stay focused and give it everything I have.”

David, now one win away from a phenomenal fifth gold medal in 20 years, will contest the 2018 final on her 35th birthday. “I’m pleased to win my match today and I felt good going up against Dipika who is a tough contender,” said the favourite from Penang. Au, the reigning Hong Kong champion, will now line up against domestic rival Max Lee after the second seed was also made to fight back from two games down before beating Malaysian Nafiizwan Adnan (pictured below, left, with Lee) 5-11, 6-11, 11-5, 11-5, 11-9. “I think today, I was able to be more patient and stay focussed (despite being two down) right till the end,” said 28-year-old Au, ranked just two places in the world lower than his compatriot. “I’m happy that it’s an all-Hong Kong final tomorrow.

“We will give our best as we’ve already achieved our team goal,” added a delighted Au.

It's Asian Games Gold for David and Au 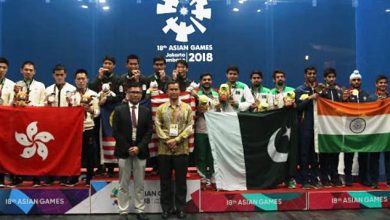 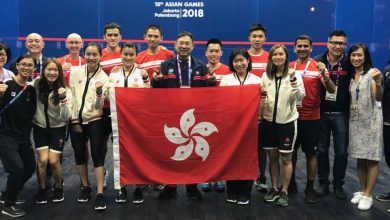 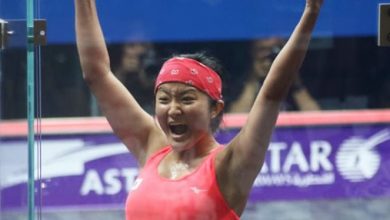 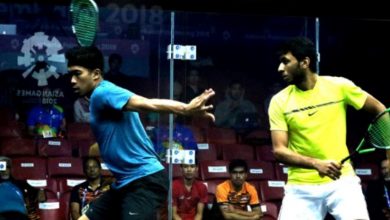