Malaysian squash star Nicol David won her fourth successive CIMB Singapore Women’s Masters title on an all-glass court seen for the first time at Kallang Leisure Park in Singapore – but her English opponent Alison Waters can take credit for having given the world number one her toughest test in today’s (Saturday) final of the $53,500 WISPA World Tour Gold event.

Top seed David, looking for her fifth Tour title in a row this year, went onto the court with a 14-0 career head-to-head record over her third-seeded opponent. 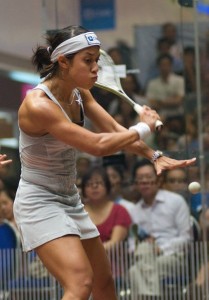 In truth, Waters had her chances and the first game was in many ways the decider. With both players at their freshest, the game settled into a battle of attrition with David conceding an early 5-2 lead, giving up five straight points with uncharacteristic loose shots.

With Waters 9-5 up, the officials were called for a let decision which ended with the point being replayed, and Nicol staved off disaster by pushing the Londoner to 9-9. Waters had her first game point at 10-9 which she failed to convert. And she went on to have five more, not succeeding in winning any, as David found her way to level off each one of them.

At 17-16, David got her second chance, and closed the door. After a 27-minute struggle, instead of being a game up, Waters was instead one down.

Make no mistakes, the results show a straight games win to David – but it was no walk in the park. 9-9 in the second game, and 10-10 in the third, gave Waters plenty of positives as she looks forward to recording her first career win against the Malaysian: the record now stands at no wins after 15 meetings!

“Each time I play her I feel like I am getting a little closer,” added the world No4. “But Nicol’s so good at retrieving, she is so fast and gets to everything. You just have to play so many shots to get a winner.”

Commenting after the game, WISPA President Natalie Grainger complimented both players on a high quality match: “These girls are at the top of their games. But Nicol’s just a bit better than the rest at the moment and Alison showed here today that she can get to game points. She needs now to go and think about how to go from 10 to 11, how to convert those chances when they come.” 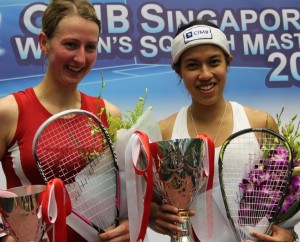 As for Nicol, it was hard work at the start, but she knew she was in control, helped by a partisan crowd in Singapore. “It’s great to play in Asia with the crowd behind you. I was feeding off them throughout the match and they helped to put that extra spring into my step.”

Bringing the tournament to the people has been a great hit – the glass court is not a new idea but it is certainly one that needed to be repeated in Singapore. With S$300,000 invested in a lease-to-buy deal for the glass court, squash fans can be certain there would not be another 12-year absence before the court is seen in public again.

Some 400 spectators enjoyed the action this year, which also went out ‘live’ on television across Southeast Asia. And Grainger sees the potential for the event to grow.

“The reception this year has been tremendous and the SSRA can certainly grow this event,” said the former world number one from the USA. “Perhaps the success this year could see a bidding war from the shopping malls in Singapore for the next edition. And I understand there is a huge complex with a casino in town which can certainly accommodate this event,” Grainger said with a twinkle in the eye.

The Marina Bay Sands integrated resort hosted a glittering first class fencing event just the night before, and they could certainly do with a little bit of magic from the ladies. “Success guaranteed,” added an event spokesman.

The Malaysian world number one stayed patient throughout the 40-minute encounter, working long rallies to her advantage and making her Australian opponent work just a little harder to keep up.

Brown was magnanimous in defeat: “Nicol is just super quick around the court. I had a game plan in mind but didn’t execute it properly. She wasn’t giving much away at all throughout the match, even when I was trying to slow the game down.

“At times it felt like I had to win the rallies several times over just to get a point!” added the 24-year-old from New South Wales.

Ten months ago, the Penangite suffered one of her four defeats in 2009 to Perry in the quarter-finals of the British Open.

But David is not about to let memories of the 76-minute match in Manchester play on her mind: “I bounced back quickly from that defeat and went on to win the World Open right after that. Right now, I’m feeling fit and am staying focused for the next match,” said David.

The other semi-final will be between second-seeded Rachael Grinham and England’s Alison Waters, the third seed.

Waters survived a third game wobble to beat France’s Camille Serme in four in the first meeting between the two in 18 months. And eighth seed Serme saw positives despite losing: “I have improved a lot in the last year, and I always want to meet the higher-ranked player to see how much I’ve closed the gap with them.”

Commenting on the match with Londoner Waters, the Frenchwoman added: “I had a bad start in game four, and that put a stop to my comeback.”

And, whilst the first three editions of the Singapore Masters final have been won by David, they have invariably featured one of the Grinham sisters. World No3 Rachael made sure that could still happen after despatching WISPA President Natalie Grainger in 20 minutes.

“It was never going to be a long match with Natalie,” said Grinham. “She always goes for her shots and even if we went to five games it would be quick.”

Looking ahead to her encounter with Waters, the 33-year-old Queenslander said: “Alison creamed me in our last three or four matches, and she’s in pretty good form. So I’m in for another tough match tomorrow.

“I’m still getting back to full match fitness having not played tournaments since April, and lasted one match in Malaysia last week,” added the former world number one.

The Australian’s quick wins over Grainger, and Singapore’s Pamela Chua in round one, would hardly have given her the workout she needed.

“Maybe I’ll practice with Nicol tomorrow morning seeing as Alison’s likely to get her hits with Perry!”

The 21-year-old twice came back from a game down to push the match to a fifth game. In the decider, Au got herself to the brink of victory at 10-6 before nerves took over. Fourth seed Abdel Kawy took three straight points to narrow the score to 10-9 but that was as close as the Egyptian got as Au took the winning point to record her first victory over a top 10 player. 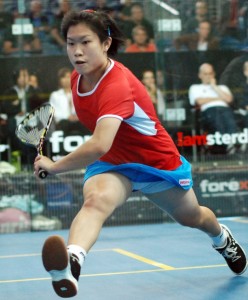 “It was Au’s first competitive meeting with the enigmatic player from Cairo, and one which she did not wish for, given her dismayed reaction last night after being drawn to face Omneya,” commented an event spokesman.

“But that’s all forgotten now as the 2008 WISPA Young Player of the Year continues to consolidate her position as Hong Kong’s leading player, with veteran Rebecca Chiu set to retire after November’s Asian Games in Guangzhou, China.”

Offering a rare smile, Au explained: “I was nervous in the first game and could not catch Omneya’s shots. But I told myself not to give up and just concentrate and play a good game.”

The left-hander’s quarter-final assignment does not get easier – as she will face Madeline Perry, the sixth seed from Ireland who despatched Malaysia’s Low Wee Wern in four games.

Hong Kong Squash Association Head Coach Tony Choi is pleased with Au’s continued progress: “Annie’s had a good lead-up before this tournament with wins last month in Kuwait and France, so she is physically and mentally in tune. There was really no pressure on her facing a top ten player like Omneya and I’m happy she managed to pull off the win.”

No joy, though, for Chiu as she went down tamely to England’s third seed Alison Waters in straight games, while second seed Rachael Grinham ended the home challenge by outclassing Singapore wildcard Pamela Chua.

For Chua, who is heading back to California soon to resume her Mathematical and Computational Studies at Stanford University, the 18-minute workout emphasised the difference between her, a varsity player, and Grinham, a full-time touring professional and a former world number one and world champion.

“Rachael is very skilful and has a wide array of shots,” said Chua. “I found it hard to work out where the next shot was coming from!”

Grinham, though, was complimentary: “There were no easy points – Pamela was in the rallies and I couldn’t let up for a minute,” said the 2007 World Open champion. “She moves and hits well but she’s got to play more of these matches to get used to the intensity.”

WISPA President Natalie Grainger came through a dramatic 45-minute battle with Malaysia’s Delia Arnold. The 33-year-old fifth seed fought back from two games down to win a match that got a little testy towards to end.

“I haven’t played that much lately, so it was a matter of finding the right shots and getting the fluidity back, and even adjusting to seeing the ball early,” said the US-based former world number one. “I’m really pleased to be able to come back into the game with a change of tactics, and simply hitting the ball a little deeper.”

Grainger will meet Grinham next in a battle of the former world number ones.

The pick of the first round matches saw France’s Camille Serme taken to five games by Australian Donna Urquhart. The stunning match turned into a real battle of wills between two supremely fit and highly athletic players.

World No10 Serme breezed through the first two games before handing back the advantage to a determined Urquhart, ranked eight places below her. The Frenchwoman’s concentration seemed to flit in and out but she managed to stay focused long enough to win 11-8 in the fifth and set up a meeting with Waters.

Australia’s Kasey Brown started proceedings at Leisure Park in Kallang with a four-game win over trans-Tasman rivalJaclyn Hawkes. And the name of her opponent was confirmed seven matches later in the day’s final tie featuring world No1 Nicol David against Egypt’s Raneem El Weleily.

Nicol is the draw at this annual tournament where she is adopted as a local by Singaporean fans. And the distinguished Malaysian she gave them a scare by dropping her first game 8-11 to El Weleily. The 26-year-old from Penang duly sharpened her focus – and her game – to motor through to the final eight.