England ended a 22-year-wait for a WSF Men’s World Junior Team Championship title as they downed top seeds and defending champions Egypt 2-1 in an enthralling final in Nancy, France.

England’s situation looked bleak when their No.1 Finnlay Withington fell 2-0 and match ball down to Karim El Torkey in the first match.

The attack-minded 18-year-old, who won a silver medal in the individuals championship, responded brilliantly, though.

After saving a match ball at 10-9 and another at 12-11, Withington brought his brilliant creative talents to the fore and silenced the Egyptian support with a 14-12 win.

The Englishman carried this momentum forward through to the fourth game, which he took 11-3, before giving England a crucial one match advantage with an 11-6 win in the fifth game.

The expected Egypt counter attack came in the second match, with Salman Khalil, an unexpected addition to the team in the place of Mohammed Nasser, better adapting to a warming court to beat Jonah Bryant 3-1 to level the tie. 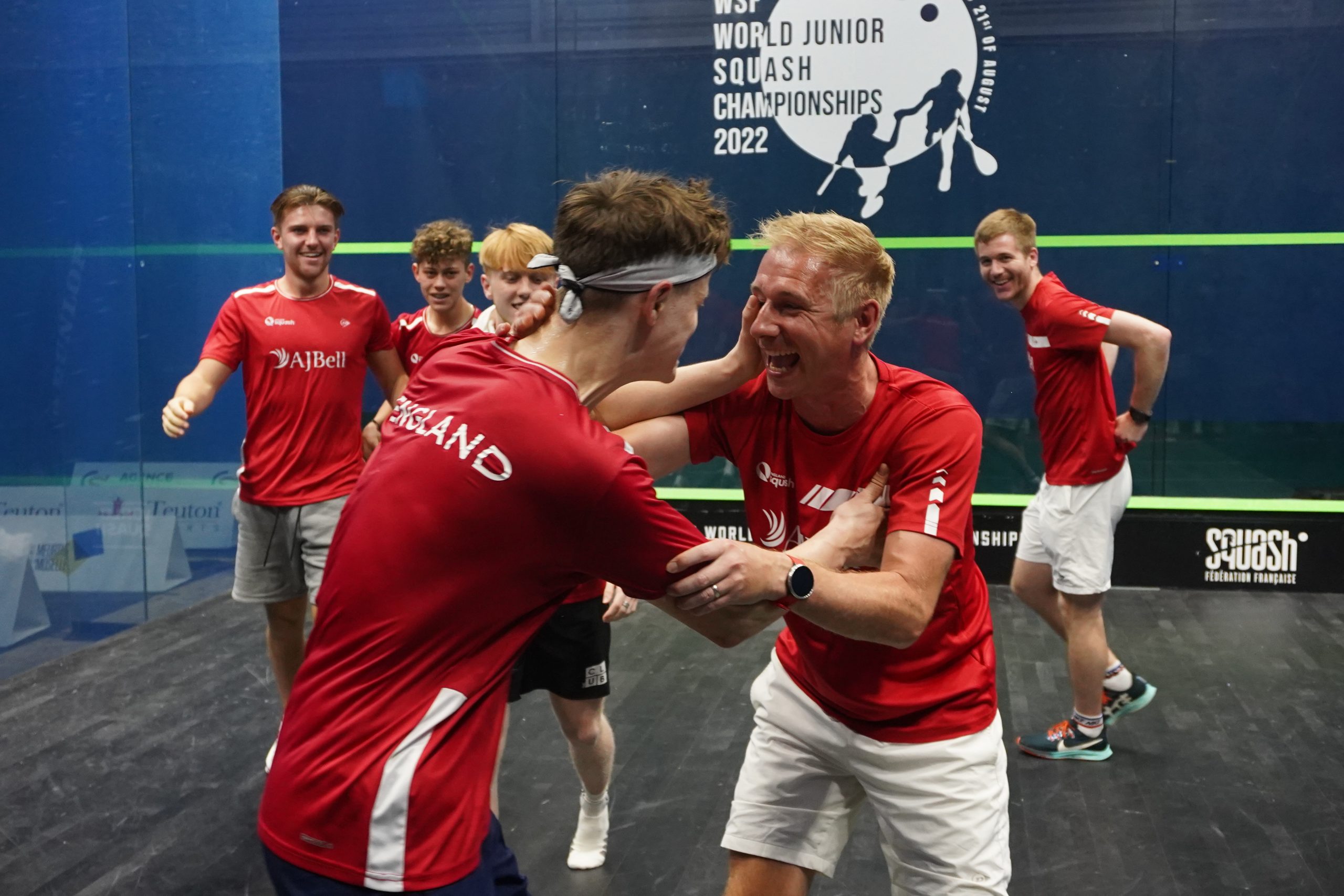 With the tie at 1-1, the weight of expectations fell on the shoulders of England’s Sam Osborne-Wylde and Egypt’s Mohamed Zakaria, who at just 14 years of age made history as the youngest player on record to appear in the Men’s Team Championship final.

Osborne-Wylde made the perfect start to the decisive match, dominating the opening game against the error-prone Zakaria in an 11-3 win.

When the Englishman took the second game 11-6, England fans could be forgiven for daring to dream that 22 years of hurt, that included a defeat to Egypt in the 2018 final, were coming to an end.

Zakaria, however, threatened to spoil the party when he pulled one game back with a 11-4 win in the third game, with his attacking instincts being rewarded as Osborne-Wylde struggled to find his line and length.

In a frenetic final game, the two players traded the lead. Zakaria appeared to be dragging Egypt to parity when he edged into a 7-5 lead, only for a brilliant winner from Osborne-Wylde to check his momentum.

This proved to be the decisive moment of the match and tie, with the reenergised Osborne-Wylde then putting together a run of four more points to have three championship balls at 10-7.

While Zakaria was able to save the first, he could do nothing about a perfect backhand into the nick from the Englishman, who took the match 11-8 to cap a memorable final and tournament for England, with the ecstatic 18-year-old sprinting around the court as he was mobbed by his teammates and coaches.

Afterwards, Osborne-Wylde said: “I literally can’t put it into words what it meant to win and the way it went down. Finn saving those match balls, Jonah fighting for everything, and the way it ended. You couldn’t ask for anything better! Just looking at the names on the trophy, and we’re going to have our names on it. I can’t believe it.

“We’re all such good mates, I couldn’t ask for better people to win it with.

“Big shout out to [England coaches] Josh [Taylor] and Adam [Fuller], they’ve been huge this week. I couldn’t ask for better coaches.

“Josh just told me to enjoy it and just to enjoy the moment, to take the pressure off yourself and it really worked in the first two games. I absolutely bottled the third but then came out in the fourth and managed to pull it back. I’ve never felt like that in my life!”

About saving the match balls in the first match, Withington said:“ I just thought to keep fighting and pushing. I knew that in his head he thought he’d won the match but thankfully I could put him down in five.”

Bryant added: “We’ve known each other for the best part of eight years. We’re all best mates and it’s special to do it together.”

Earlier in the day, the final round of ties to decide places took place, with India securing their highest finish since 2012 as they came from behind to beat the Netherlands 2-1 in the fifth place playoff. Despite the defeat, the sixth place for the Netherlands represents their highest ever finish, with the country also enjoying success in the men’s individuals championship, which was won by Dutchman Rowan Damming.