A Member of the UK Parliament has urged the British government to take action for her favourite sport by delivering a paper Squash and the Olympic Games for discussion at the UK Houses of Parliament in London today. 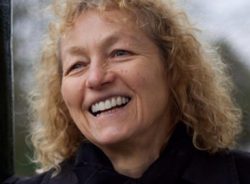 Christina Rees is the MP for Neath in Wales and a former Welsh squash number one who represented her country more than 100 times.

“Many people are surprised to learn that squash is not an Olympic sport; they assume that it has been in the Olympics for many years,” the Labour MP told her fellow MPs. “Sadly, that is not the case.

“Squash is gladiatorial, dynamic, physically demanding and mentally challenging; it is like chess on legs. It teaches players strategy, tactics and how to outmanoeuvre an opponent, so it is an ideal grounding for a political career.

“Squash is a sport for life!

“Why is squash not in the Olympics? It is a complete mystery to me,” Rees continued. “Squash is a genuinely global sport that is played by millions of people all over the world. There have been male and female world champions from every continent. Last year, 47 countries hosted professional senior tour events, featuring players from 74 nations. We now have over 50,000 courts in more than 185 nations, from the Arctic Circle to the bottom tips of South America and Australia.

“The host for 2024 will be decided in 2017. The front-runner appears to be Los Angeles, but we have no idea whether there will be any space for new sports. Squash would be inexpensive to introduce, with men’s and women’s singles draws of 32 each.

“The competitions would take place on two courts over six days – each show court could accommodate 4,000 spectators. Imagine what two show courts in Horse Guards Parade would have added to the London games!” concluded Rees in her impassioned plea to the government to show its support for squash.

Tracey Crouch, the Parliamentary Under-Secretary of State for Culture, Media and Sport, responded: “There is no doubt that the case to include squash as a future Olympic sport has been made with great passion and conviction today.

“Squash is indeed an exciting, dynamic sport and it has a rich heritage in this country.

“There is certainly a case to be made that such an innovative and exciting sport should be able to grace the world’s biggest stage.”

Delighted by this governmental hearing, World Squash Federation President N Ramachandran added: “It’s good to know that our case to try to secure a place for squash on the Olympic Games programme is being made at parliamentary level.

“We continue to believe that squash is a great fit for the Olympics and dream of the time when the Games could become the pinnacle aspiration for all our athletes.”