Defending champions Diego Elias and Habiba Mohamed are just one step away from retaining their titles in the WSF World Junior Individual Squash Championships – but their victories in the semi-finals at the Squashtime Centre in Eindhoven in the Netherlands could hardly have been more contrasting.

Top seed Elias, whose success in last year’s championship in Namibia made him Peru’s first world squash champion, cruised through his match against Malaysian Eain Yow Ng in just 20 minutes. 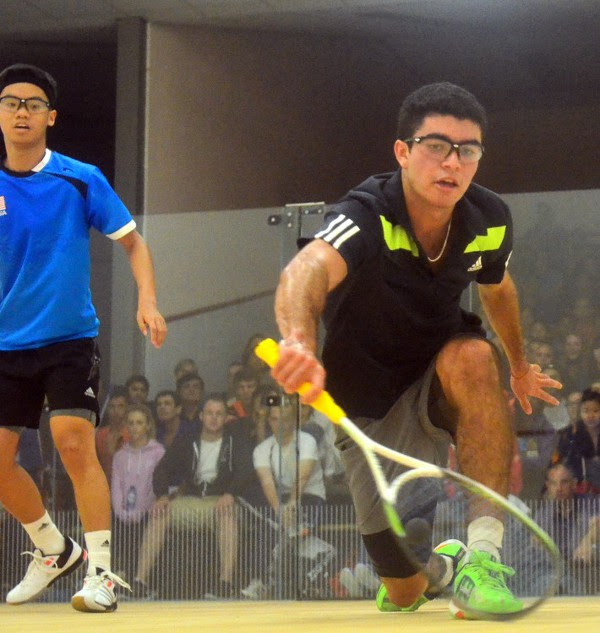 “I enjoyed that, apart from the running,” the 17-year-old Malaysian (pictured above, left, with Elias) told the event websitewww.wsfworldjuniors.com later. “I’ve played a few of the top guys in PSA events now, but I’ve never been put under pressure like that!” “Reaching the final is a big thing for me,” said the delighted 18-year-old from Cairo (pictured above, foreground, with Abouaish) after his 11-5, 11-5, 7-11, 11-8 triumph. “It’s hard to play someone you know so well, I tried to change my game but he played well and made it very tough at the end.

“I hope I play well in the final and that it’s a good match.”

Egyptian Habiba Mohamed went into her women’s semi-final clash with Salma Hany Ibrahim boasting an unbeaten record against her fellow Alexandrian. Showing little evidence of the toll the previous two five-game matches must have taken, underdog Ibrahim took the opening game, then the third after the top seed struck back in the second.

The defending champion levelled again – but Ibrahim refused to give up, leading various times in the decider before earning four match balls at 10-6.

However, a determined Mohamed fought back to draw level at 10-all, then won the next rally to earn her own first match-ball before putting the ball into the tin to hand back the advantage to her opponent. At her next match-winning opportunity, the title-holder fired in a winning boast from deep to keep alive her hopes of retaining the trophy. 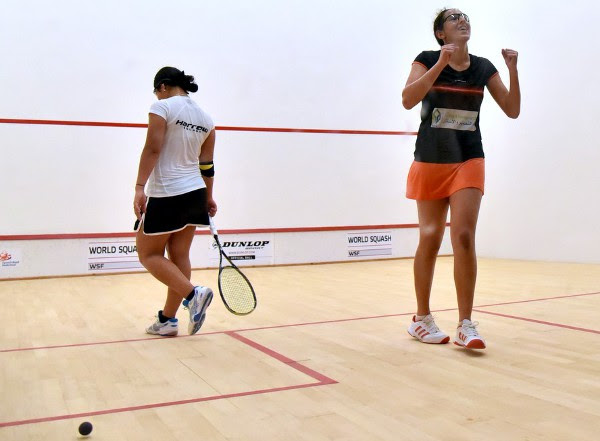 “I’m happy to win of course, but I don’t feel like I played well,” admitted Mohamed (pictured above celebrating her victory) after the 10-12, 11-8, 10-12, 11-6, 13-11 victory after 83 minutes. “All credit to Salma, she played so well and made it a really tough match. She had a lot of strokes which I didn’t agree with, but I had a chat with the referees afterwards who explained what was happening – I’d like to thank them for doing a tough job.

“At 6-10 in the fifth I was telling myself that I was the number one and I want to stay there, I won’t lose, I just won’t lose!

“Now I’ll need to get some rest before the next match. I’ll do my best – and I won’t give up!”

In a repeat of last year’s women’s final, Mohamed will play Nouran Gohar after the second seed also survived a close encounter with a fellow Egyptian, beating 3/4 seed Mariam Metwally 5-11, 11-7, 11-8, 11-7 in just under an hour. 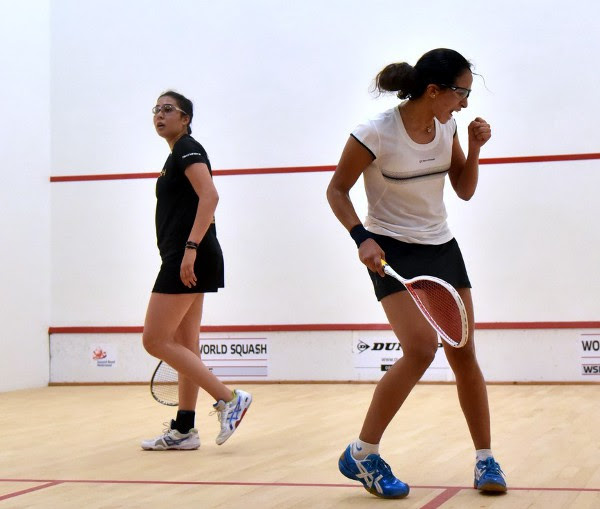 “I just didn’t find my game at the start,” admitted the relieved Gohar, the world No.15 from Cairo (pictured above in celebratory action), afterwards. “She was playing really well and there wasn’t much I could do. For the next three games I felt I was in control, but then at 10-2 she started attacking everything again, going crazy and coming back at me.

“I was so relieved at the end, I thought it would be a let but I was so glad when I head the referee say no let, it was getting close!

“I haven’t played Habiba since last year’s final, so I haven’t thought about a plan yet, maybe I need to now! I hope it will be a good final, a clean match and that the crowd enjoy it.”