Top seed Alan Clyne powered home to the Kent Open title with a straight games victory over surprise finalist Jonathan Harford in the climax of the $10,000 PSA World Tour squash event in Maidstone in the English county of Kent.

The Scot won 11-8, 11-3, 11-8 in 35 minutes, finishing strongly in the first and third games and totally dominating the second to win the inaugural PSA One Star tournament at The Mote Squash Club.

Clyne was in control throughout most of the match, using his incredible speed and court coverage to counter any attacking moves from the tall English qualifier who had enjoyed a walkover into the final following the withdrawal through illness of third-seeded Irishman seed John Rooney. 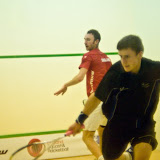 The 23-year-old world No62 from Edinburgh dominated the front half of the court and whenever Harford played anything loose or short, the Scotsman pounced on the ball and won a succession of points with his trademark killer drop shots.

Clyne’s composure at the business end of games was obvious. From 6-6 in the first game, he tightened up to win four points in a row and although Harford countered with two stunning winners, Clyne had no trouble in seeing out the game.

In hot and humid conditions, both players were literally dripping with sweat as the second game started and Harford was unable to withstand the ferocious barrage of front-court winners flowing from the Scotsman’s racket.

The game was over in five minutes and the crowd were willing underdog Harford to prolong the match. The 26-year-old from Birmingham responded solidly and fought hard in the third game, but was unable to build on his 8-5 lead as Clyne regained control to win six points in a row to claim the title.

“I was very pleased with the way I played all week,” said a delighted Clyne. “The courts here at The Mote are excellent and everyone at the club made us very welcome. It’s always great to see new tournaments added to the calendar and I am sure all the players will look forward to coming back next year.” 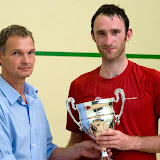 Runner-up Harford was pleased to claim some valuable points to help his climb back up the PSA rankings following a hip operation. He said: “Alan played a fantastic game and I couldn’t get near him today. He was absolutely awesome at the front of the court.

“I would like to thank The Mote Squash Club and the Kent SRA for giving me a local spot in qualifying. It has really helped me to get back into the game. I can only endorse what Alan said about the hospitality at this club and the players are all grateful for the way they have been looked after. It’s been a great tournament.”

Top seed Alan Clyne fought back from two games down to beat Dutchman Piedro Schweertman in the semi-finals of the Kent Open to claim a place in the climax of the new $10,000 One Star PSA World Tour squash event in Maidstone in the English county of Kent.

The entertainment value served up by both players more than made up for the earlier disappointment of the sudden withdrawal of No3 seed John Rooney, who went down with food poisoning overnight after a family meal in London.

That presented qualifier Jonathan Harford with a walkover into the final and the prospect of picking up some valuable ranking points as the 26-year-old from Birmingham bids to climb back up the PSA world ladder after several months out with a hip injury.

Clyne will obviously be favourite to become the first winner of this inaugural tournament – but Harford was delighted to watch Clyne and Schweertman make such a massive physical investment in the semi-final. 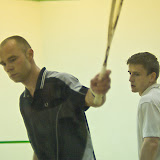 The No6 seed from Amsterdam lost in straight games to Clyne when they met in the recent final of the West of Ireland open. This time he began strongly to take the first game and hit back from 8-4 down to win the second 13-11 on a tiebreak.

However, that phenomenal effort clearly took its toll as the 26-year-old tired in the second game. It looked like Clyne might achieve a rare 11-0 whitewash until the Dutchman scrambled a point on game ball.

If Schweertman was taking a tactical rest it clearly had the desired effect as he opened up an 8-5 lead in the fourth game. He then showed commendable sportsmanship as he called his own shot down just three points away from victory.

Clyne responded in magnificent style, reeling off six points in a row to make the scores level at two games all. 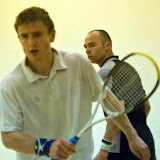 The fifth game was a classic mixture of skill and attrition as both players fought to a standstill. Clyne won the first three points but Schweertman drew level and then moved ahead at 6-5. Clyne then won four points in a row but Schweertman turned the tables to reach match ball at 10-9.

Both players attacked throughout and a succession of devastating winners was matched by some spectacular retrieving.

Staring defeat in the face, Clyne once again showed his phenomenal powers of recovery to force a tiebreak and win the next two points to clinch victory.

The win marks Clyne’s second PSA Tour final of the year – and the eighth of the 23-year-old from Edinburgh’s career.

Harford is celebrating his sixth career final, but his first since contesting the climax of the Charleston Challenge in the USA in September 2008 – when he lost to Clyne in the pair’s only previous Tour clash!

Top-seeded Scot Alan Clyne was too fast and too accurate for young Malaysian Ivan Yuen in the Kent Open, completing a clean sweep of straight-game results in the quarter-finals of the new $10,000 One Star PSA World Tour squash event taking place at The Mote Squash Club in Maidstone in the English county of Kent.

Clyne won 11-3, 11-6, 11-6 in 35 minutes to confirm his status as the tournament favourite. From 3-1 down in the opening game, the 23-year-old from Edinburgh dominated throughout, never allowing his opponent to put more than two points together as he controlled the scoreboard.

Clyne has one of the best counter-drops in the game and showed that as he nullified the Malaysian’s touch play at the front of the court. The Scot now takes on tough Dutchman Piedro Schweertman, who produced a performance of power and precision to upset England’s No4 seed Joe Lee.

Lee lost a tight first game and will be kicking himself for blowing a 6-2 lead in the second. Schweertman maintained his ice-cool composure to dominate the third game – but the 26-year-old from The Hague will need to repeat that form to trouble Clyne, who beat him in straight games in the recent final of the West of Ireland Open in Galway.

Jonathan Harford outplayed his Birmingham housemate Chris Truswell to reach the semi-finals. In the battle of two qualifiers, Harford was always the more consistent player, mixing accurate drops with tight, deep drives to clinch a deserved victory which gives him bragging rights in the Edgbaston suburb of Birmingham.

Harford meets John Rooney in the semi-finals after the Irish No3 seed also won in straight games in an identical match time of 41 minutes.

Ford, the Kent captain and county coach, began strongly and opened up an 8-3 lead before Rooney began to work his way into the match, amazingly winning eight points in a row to take the opening game 11-8.

Ford won the first two points of the second game but again Rooney countered strongly to lead 7-2. This time it was Ford’s turn to fight back and a run of five points brought him level at 7-7. Again the score see-sawed and Rooney bagged the next three points to reach game ball. He clinched the game 11-8 and Ford was facing a tough challenge getting back into the match.

Seeds Tumble As Housemates Clean Up In Kent

Birmingham housemates Jonathan Harford and Chris Truswell, both qualifiers, will meet each other in the quarter-finals of the Kent Open after knocking out two of the top seeds in this new $10,000 PSA World Tour squash event at theMote Squash Club in Maidstone in the English county of Kent.

The pair both emerged from the qualifying competition to delight the packed galleries with their stunning victories at The Mote Club.

Ironically, a third housemate, British Under-23 champion Joel Hinds, failed to make it a hat-trick as he fell to top seed Alan Clyne. Hinds fell away after a promising start as Scotland’s world No62 clinched a fourth game tie-break to win 4-11, 11-8, 11-2, 12-10 in 53 minutes.

Favourite Clyne will face fifth-seeded Malaysian Ivan Yuen in what is sure to be a high-speed encounter. Yuen had too much guile and control as he nullified the hard-hitting Egyptian Karim AGA Samy, winning 11-3, 12-10, 11-4 in 28 minutes.

Another Egyptian to exit was the hugely-talented qualifier Wael Farag, who mounted fierce resistance before falling to sixth seed Piedro Schweertman. The Dutchman combined ferocious power with sublime touch to triumph 11-9, 8-11, 11-5, 14-12 in 46 minutes.

HK titles for Chan and Lau