Latin America’s first ever all-female WSF Level One coaching course will be held in Colombia between September 21-24 to coincide with Women’s Squash Week.

Ran by WSF Level One tutor Diego Becerra, the sessions will see 15 female Colombian nationals, with one of the candidates including World No.73 Catalina Pelaez, descend on the club to take part in the course, which is a first in the region. 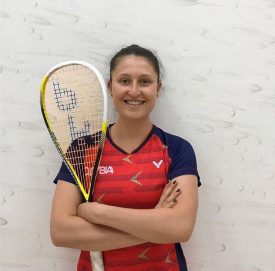 The course consists of lectures and practical sessions and Becerra is hoping that this will encourage more woman in Latin America to get involved in coaching.

“The Colombian Squash Federation, with the support of the Minister of Sport, Ernesto Lucena, had the idea to reach out to all the woman interested in beginning a coaching career,” said Becerra.

“It has been a fantastic reaction from our squash players and now we are going to have a group of more than 13 woman that want to start this process. I believe that the region owes them [female players], and the first step is to set an example and inspire more to become female coaches. We want to open the door for others to encourage more woman in the region.”

“The value [of the WSF coaching courses] is enormous since the coaches are the first line of battle, they organise and sell squash to the children in our region where much propaganda is needed. They are the ones who promote discipline at all levels, without them there is no supply chain.

“For me there is no ‘holy word’ about this, but I think the three main aspects of a coach should be to deliver the information properly while being very clear and motivating, to be organised and professional and above all help to form good people for society.”

The coaching course comes off the back of the global COVID-19 pandemic, which has resulted in unprecedented changes to the lives of billions.

Becerra, who works closely with the Becerra-Stillman Squash Academy, responded to the social distancing guidelines put in place by the Colombian government by moving his sessions partly online to ensure he could stay in touch with pupils and thinks that the pandemic has brought the squash community closer than ever before.

“So far I have taught nine online level one coaching courses throughout Latin America, from Mexico through to Chile,” he said.

“The entire country hasn’t been able to train after the quarantine. We are still waiting for the local government to be able to start since the opening has been gradual. Our academy is working on all kinds of courses for players online, it was only this week that squash clubs have opened in a couple of cities in Colombia.

“In many aspects, COVID-19 it has been negative, I would not like to name them because they are obvious. Rather, I want to focus on the positives and for me it has been the perfect setting for all of Latin America and possibly the world of squash to come together more, communicate more between countries and learn more about what is happening with others and their projects.

“I think there was an ‘iron curtain’ regarding the union between associations and countries before COVID. Now the reality is that in all corners of the world we have a real interest in what the other is doing since we have been at home for a long time and with the internet. Now, squash has been globalised.”