Peter Barker, the Englishman who boasts the most consistent record in PSA World Series events for the past two years, fell to South African Stephen Coppinger in a major first round upset in the J.P. Morgan Tournament of Champions at Grand Central Terminal in New York.

It was the world number seven from London’s 46th appearance in a PSA World Series squash event since last suffering a first round loss – at the Saudi International in December 2006! 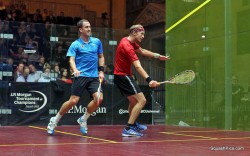 Ranked 16 places lower than Barker, Coppinger had lost to the Englishman in all five of their previous meetings. The first game was extremely physical, as the 6’3″ Coppinger and 6’0″ Barker jostled for position at the T. Up 10-8 in the first game, Barker was unable to close out the game through a seemingly endless series of let calls, and Coppinger prevailed 12-10.

After losing the second 6-11, the Londoner staged a comeback to win the third by the identical score. But Coppinger stormed to an 8-0 lead in the fourth game before closing out the match to earn a spot in the last 16 of the world’s largest spectator squash event.

“Last year, I was just happy to qualify for the main draw here,” said Coppinger, the world No23 who credited his training with former world champion David Palmer for the significant improvement during the past year in his game and his mind-set. “But this year, I have the extra belief; I feel like I belong here and I can play with these guys.” 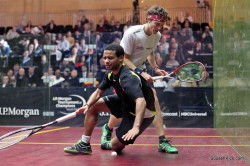 Coppinger’s next opponent will be England’s Adrian Grant, who progressed to the next round with a five-game victory over Australian Cameron Pilley. Bidding to make the second round for the third time in seven Tournament of Champions appearances, Grant started slowly but picked up steam through the match.

Just 24 hours earlier, when the Londoner chatted with school age participants in StreetSquash, the Harlem, NYC-based urban Squash Program, Grant had talked good humouredly about his reputation on the PSA Tour for playing five-game matches. 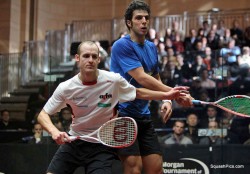 Egypt’s Omar Mosaad, in only his second appearance in the Tournament of Champions, notched up the first victory of the tournament with a four-game victory over Switzerland’s Nicolas Mueller. “I am so happy to play here and win,” said the 24-year-old world No9 with a huge smile. He credited a basic back court game of hitting the ball deep to control the court and waiting for a volley opening being the winning strategy.

Next up for the Egyptian is Malaysia’s 32-year-old Ong Beng Hee, whose seniority provided the winning edge in his four-game victory over 26-year-old New Zealand qualifier Campbell Grayson. “I played well in patches,” said the former World Junior Champion who made his first appearance in the ToC qualifiers in 2000. “I think my experience made the big difference in the fourth game.” 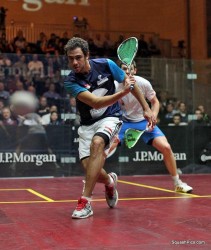 The three qualifiers in the evening session of play were schooled by their more seasoned opponents. World No12 Tarek Momen eliminated Canada’s Shawn Delierre in straight games, and world champion and current world No1 Ramy Ashour ended Adrian Waller‘s Tournament of Champions journey with a 3/0 victory.

Simon Rosner of Germany, less than pleased at having given up a game to Pakistan’s Yasir Ali Butt, took comfort in having won even with what he considered a slow start.

The full house evening crowd at Grand Central buzzed with anticipation as they settled in for the evening’s second match between top seed James Willstrop and the acrobatic Miguel Angel Rodriguez of Colombia, the 29-year-old Englishman was just too good and allowed Rodriguez only a few points in each game. 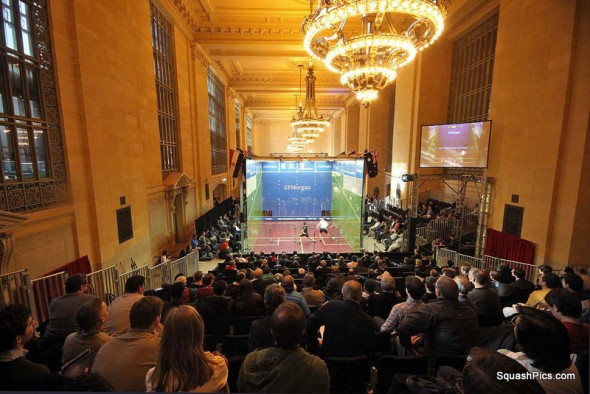 Marche Marches On In New York