Two new champions were crowned at Drexel University in Philadelphia as Nicol David and Ramy Ashour joined the list of winners of the prestigious U.S. Open Squash Championships. 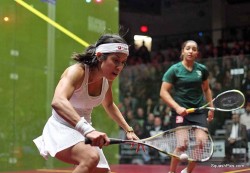 The U.S. Open was the only major title that was missing from Nicol David’s trophy cabinet, but tonight in Philadelphia not only did she fill that particular gap, by gaining revenge for her home defeat in the Malaysian Open final by Raneem El Weleily, she set a new record of WSA titles, moving one ahead of Sarah Fitz-Gerald to 63.

Compared to yesterday’s semifinals this was a fast an furious match with El Weleily unafraid as ever to go for her shots and David, as well as trying to contain her opponent, at times joining in the shotmaking contest, more often than not to good effect.

After the Egyptian made the slightly better start the first game was evenly contested, David leading 9-6 but El Weleily firing in four winners to earn game ball. She would have three chances, but Nicol typicall took her first opportunity as an Egyptian dropshott found the tin for 14-12. 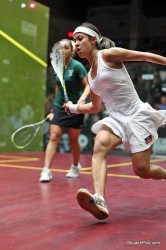 As she said last night though, she’s been there before, many many times, and a run of eight unanswered points took her to 10-6, then 11-6 on another Egyptian error.

The top seed held a slight advantage throughout the fourth, and from 8-6 two short volleys into the nick brought up match ball. A dropshot saw Raneem struggle to reach the ball, tripping over her opponent and she was just being assisted to her feet when the unsurprising, but nevertheless somewhet anticlimactic, “no let” decision came.

A first U.S. Open title, revenge for a home defeat, and a new record, not a bad night’s work even for Nicol! 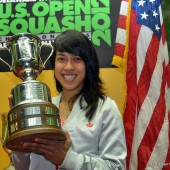 “I can’t believe it,” said a delighted new champion, “I keep thinking I should still be out there running after Raneem’s dropshots like I’ve been doing all night!

“When she gets on a roll like she did in the third she can score six points before you’ve even moved off the ‘T’, but I just got my act together, became more positive and stronger on my shots, and played my game not hers, which is what Liz [Irving] had told me to do.

“It feels fantastic to be U.S. Open champion! Next I just hope we can get in the Olympics – if we do I’ll make sure I’m there, even if I have to turn up with my walking stick!” 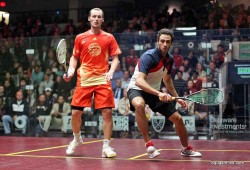 Egypt’s Ramy Ashour upset the seedings for the second time in 24 hours when he beat world No3 Gregory Gaultier in the final of the Delaware Investments US Open to win the prestigious title for the first time.

The straight games triumph also marks the 25th PSA Tour title of the 25-year-old’s career – a remarkable 17 of which have been World Series events.

World No4 Ashour reached his 40th Tour final after beating English rival Nick Matthew, the world No2 – while Frenchman Gaultier also took out an Englishman, James Willstrop, the world No1, in the other semi.

Ashour, playing with the speed and control with which he wrapped up his semi-final, was quickly 6-3 up in the opening game of the final, and took it after just six minutes.

Gaultier fought back from 1-6 down in the second to draw level at nine-all – but Ashour found two winners to extend his lead.

After an even start to the third, Ashour raced from five-all to 9-5, and although Gaultier again pulled back – going on to save two match-balls – it was a Gaultier volley into the tin that gave the Egyptian the title for the first time. 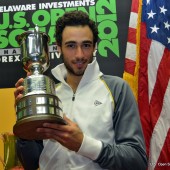 “I lost in this final three years ago so to win a prestigious title like this against such a great player as Greg feels just unbelievable,” said Ashour, the fourth successive Egyptian winner of the title. “I felt good on court tonight but I had to fight really hard to win.

“It’s been a great week, everyone here does a tremendous job and makes us all feel so welcome, so thanks to everyone involved and we’re all looking forward to next year already!”

Ashour’s 11-4, 11-9, 11-9 victory also takes him to the top of the 2012 Dunlop PSA World Series Standings – 10 points ahead of Matthew. Both have won two World Series titles in 2012, but Ashour has made the final in all of the four in which he has competed. Willstrop slips down to third place – again only 10 points behind Matthew – while Gaultier strengthens his grip on fourth place. 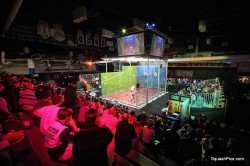 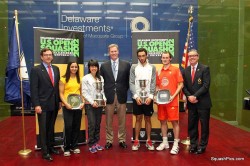 World Squash Day Makes A Racket To Back 2020 Olympic Bid