Nicol David Back In Charge With ‘A Great Feeling’ 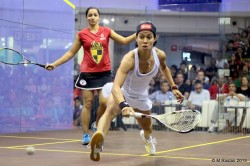 Malaysian squash star Nicol David admitted today that it was ‘a great feeling’ to regain the Women’s CIMB Malaysian Open title – avenging her final defeat last year by beating defending champion Raneem El Weleily to claim the trophy for the eighth time since 2005.

The world number one from Penang was celebrating her 11th successive appearance in the final – and was arguably more determined than ever before to secure her country’s prized title after the shock 2012 victory by Egyptian El Weleily.

David dropped just one game en-route to the final of the WSA World Series event – beating her semi-final opponentCamille Serme in straight games in 42 minutes at the Curve Shopping Mall in Petaling Jaya, Selangor.

But El Weleily, the third seed from Cairo, was taken the full distance in the other semi before finally overcoming England’s higher-ranked Laura Massaro in a 78-minute marathon.

“In last year’s final, Raneem probably played the match of her life,” reported event spokesman Andrew Cross. “Could she repeat that performance in this year’s final? Nicol looked determined today and a very large vocal crowd had turned up to watch her play the final – it was the busiest I have seen the venue with lots of people wanting to get a glimpse of Nicol. 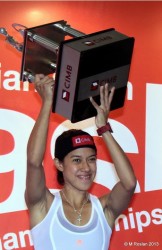 “Nicol started better with Raneem almost playing catch up throughout the whole opening game. Raneem was hitting more tins than winners and that was the story throughout most of the match. Nicol won the opening two games and in the third Nicol started well taking a lead to 8-3 then converting this to 10-3.

“Raneem wasn’t quite finished as she started to fight back – but it wasn’t enough as Nicol won the game to clinch the match.”

An overjoyed David was thrilled with her 11-8, 11-7, 11-6 triumph in 34 minutes. “It’s great to win it this time around, in the Malaysian Open – and finally got a good win in Malaysia after a year,” said the new champion.

“It’s such a great feeling! And I think it’s one of the biggest crowds ever at the Malaysian Open.

“With Raneem having a big match yesterday, I think she felt it a little bit today. I just had to take advantage and come out firing. I’m just happy to win it three love!”

The win, David’s first ranking title of the year, takes the 30-year-old’s career Tour tally to 67 titles – 35 more than her nearest rival! 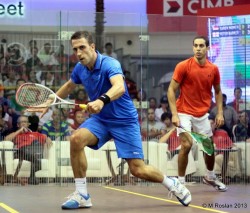 An accidental clash with Spanish opponent Borja Golan‘s racket in the semis resulted in the Englishman sustaining a severe nosebleed – and the match being rescheduled for 9.00am this morning

It took 99 minutes for the second-seeded Londoner to earn his place in the final – and only hours later, before a packed crowd surrounding the all-glass court, Barker was back in action against defending champion Tarek Momen, the No4 seed from Egypt, in the climax.

“Tarek didn’t start as well as he would have liked, always being a few points behind in the opening game, Barker winning 11-5,” said event spokesman Andrew Cross. “In the second it was similar with Barker leading all the way but then when Barker got to nine points he hit three unusual errors and Tarek took advantage to win the game 11-9 – the first time Tarek had led at any point in the match.

“The third was close up until the midpoint of the game when Barker broke clear to win 11-5. In the fourth, with Tarek now with his back against the wall, Barker ran out an easy winner 11-3 to win his first CIMB Malaysian Open title.”

Speaking to Kng Zheng Guan of the Malaysia Star, Barker said: “I think my nose is broken. It’s usually not like this and it’s really sore. I’m going to fly home tonight and see my doctor tomorrow morning. 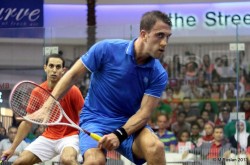 “I’m absolutely delighted to win the title, as the last time I came here I won the KL Open in 2009,” added the world No7 from London who has now won his 15th Tour title. “I’m coming into some form at the moment and to beat both Borja and Tarek on the same day is a treat.”

Later, Barker conceded: “I’m obviously delighted to win this week – it’s quite possibly the highlight of my career, beating Borja and Tarek within a few hours of each other with a dodgy honker!

“I am genuinely a little lost for words right now and I have too many people to thank. You know who you are: thank you for your support, love and continued encouragement.” 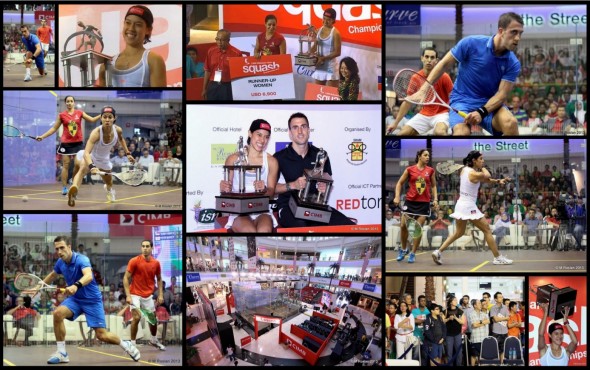 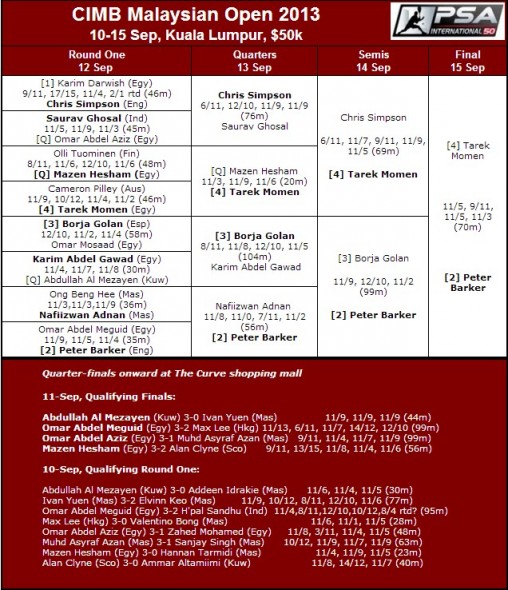 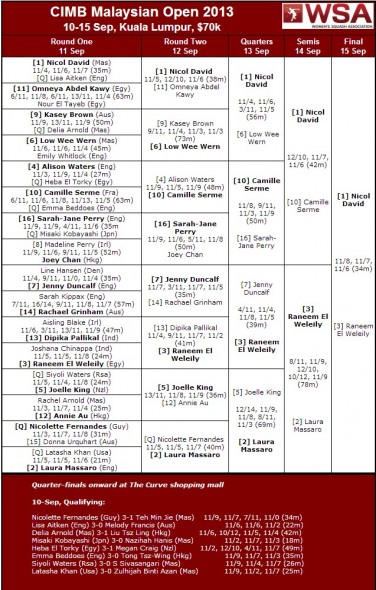