Top seed Nicol David, the world number one from Malaysia who is bidding to win the title for a third successive year, ended the brave run of Donna Urquhart – despatching the Australian qualifier 11-6, 11-8, 11-5 in just 30 minutes.

It was Duncalf and Grinham’s 15th Tour clash since 2003, with the Australian boasting a 9-5 lead as well as success in their most recent meeting in October in Qatar.

And after more than an hour of energy-sapping minutes in the Camana Bay heat, it was the 34-year-old Queenslander who earned the first match-ball at 10-7.

But Duncalf battled back to draw level at 10-all – and, after a marathon rally, delivered a volley into open space to reach her first match-ball before clinching victory when an exhausted Grinham hit the ball into the tin.

“That’s just ridiculous, I’m drowning here, it’s as if I just got out of the swimming pool,” exclaimed Grinham towww.squashsite.com afterwards. “It’s about time we had a good one. I played well and I had a chance tonight, but she’s not world number two for nothing, she’s an alright player! 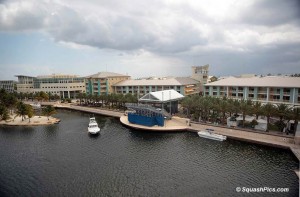 “It’s annoying getting so close and not winning.”

Duncalf, now in her 19th Tour final, had been looking forward to more agreeable conditions: “Coming here tonight there seemed to be a bit of a breeze – I hoped it might be cooler but it was just as hot as yesterday.

“I really enjoyed the game, but that second last rally, 10-all in the fifth, it’s the first time I’ve ever felt queasy on court, I was seeing stars during that rally. I’m so glad that she tinned on the next one, I’m not sure I could have gone on any longer.

“When I was match balls down it was just about not panicking, but it could have gone either way. It’s matches like these that you remember after you’ve finished.” 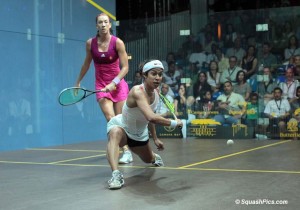 Donna Urquhart was celebrating the best week of her squash career after winning two qualifying matches – both 50 minutes plus – then in the main draw beating the world number five, then the world number three, both in five games.

“I’ve had a good week, a great week,” said the 24-year-old world No16 from Brisbane after losing to Nicol David. “But tonight was one match too far. I went for my shots from the start, I knew that was the only way I could do anything, but I just couldn’t keep going.”

The semi-final victory, David’s 11th in a row in the Cayman Islands since winning her first title in 2009, marks up the Malaysian’s 68th Tour final.

The final will be David and Duncalf’s first Tour meeting since last August when they contested the Hong Kong Open climax – but it will be the 21st of their WISPA careers. 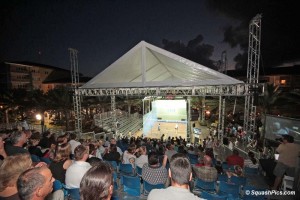