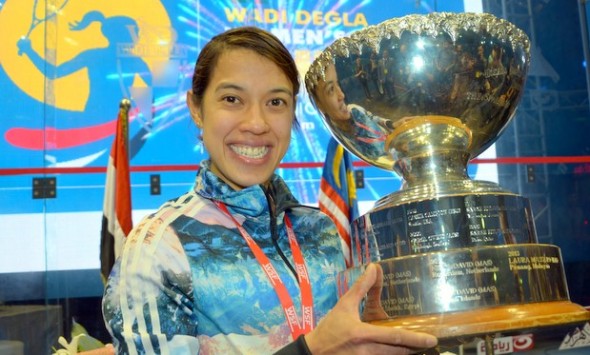 In a dramatic climax to the Wadi Degla Women’s World Squash Championship, Malaysia’s world number one Nicol David saved four match-balls in the final of the 30th staging of the premier WSA tournament to overcome home favourite Raneem El Welily in a five-game 66-minute display of exhilarating squash at the Wadi Degla club in Cairo – and extend her record to eight titles! 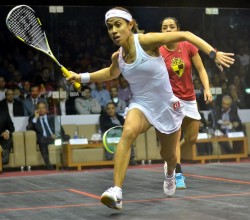 David, the 31-year-old from Penang who won her first world title in Hong Kong in 2005, came into the 2014 event looking for revenge after crashing out of the 2013 championship semi-finals.

Her 2013 victor, Egypt’s three-time world junior champion Nour El Sherbini, failed to make it past the opening round this time – and the English title-holder Laura Massaro dropped out at the quarter-final stage. 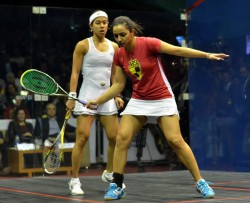 But world No.3 El Welily is in the form of her life – and was enjoying all the benefits of home advantage, playing at the Wadi Degla club where she has been based for many years.

Much to the delight of the crowd, El Welily took the opening game – but David came back to draw level before again the local heroine grabbed the third to take a 2/1 lead.

At 6-2 down in the fourth, the Malaysian favourite claimed four points in a row to even matters – but, carried by the crowd, El Welily again reclaimed the advantage to win four points in succession to reach match-ball at 10-6. 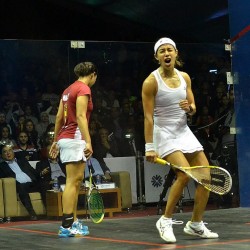 Just one point away from a maiden world title, El Welily was unable to convert – hitting the tin three times as David clawed back the deficit to draw level again before eventually taking the game after a tie-break to force a decider.

“I told myself I wanted to win the last point,” the jubilant Malaysian told the event website www.worldsquashchamps.comlater. “I just kept repeating that: ‘it’s not over until it’s over’.

“Raneem was just playing too well, I just had to find something in me. I just wouldn’t let go, and just kept fighting. 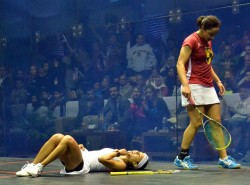 “It was such a pleasure to play in Egypt in front of such an amazing crowd. All this wouldn’t have happened without the involvement of Wadi Degla in receiving the Championships, over such a short period of time, and without the hard work of Karim (Darwish) and Engy (Kheirallah) and all the team.”

The historic title triumph not only extends David’s record world title haul to eight, but also marks the 78th Tour title of the Malaysian superstar’s career. 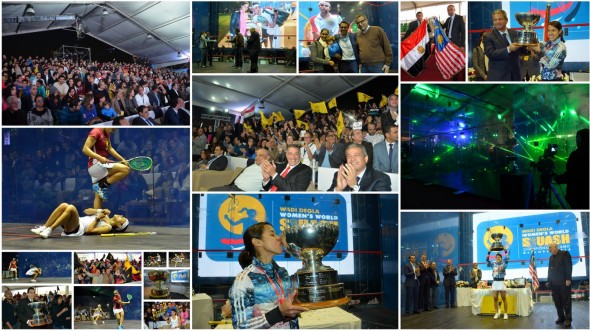