Swiss Sweep Into World Teams Top 12 & Dedicate Success To No.1

After being demoted to 15th seeds on the eve of the event, Switzerland stunned hosts USA in today’s final qualifying round of the WSF Men’s World Team Squash Championship in Washington DC to guarantee themselves a top 12 finish for the first time.

The team then dedicated their success to Nicolas Müller, the country’s long-time number one who was forced to return home the day before the event started following the sudden death of his mother.

23 nations are competing in the 26th edition of the biennial World Squash Federation championships, hosted by US Squash, at Squash On Fire, the new state-of-the-art eight-court facility in the US capital.

Underdogs Switzerland took on USA on the all-glass showcourt at Squash on Fire. The home side, promoted to 12th seeds on the eve of the event, were eager to justify their new seeding and claim their place in the knockout stage of the championship featuring the top 12 nations.

The two countries last faced each other in 2011 when USA emerged triumphant by a 2/1 margin.

Team number one Dimitri Steinmann put the Swiss ahead after beating US champion Todd Harrity 11-5, 5-11, 11-5, 11-5 – before New Yorker Andrew Douglas levelled the tie for the hosts by overcoming Robin Gadola in four games.

Swiss No.2 Reiko Peter, eager to make up for his defeat to USA in the 2011 championship, battled for 36 minutes against Chris Hanson (both pictured below) to secure the 15-13, 11-9, 11-8 victory which earned his country its best ever finish – and denied USA their anticipated place in the top 12. When it was pointed out to Pascal Bruhin that the success would lead to their best ever finish, the Switzerland team manager and coach said: “We were talking about this before we got here – getting to the knockout stages and the top 12 would be the best we have ever done. We are really happy.

“This really belongs to Nici and Bettina his Mum. We wanted to do it for him: he was in our team for 13 years. He’s our number one. He’s a great guy and his family is so wonderful and it was really important for us to show him that we can stand up for him.

“I really want to dedicate this to the family Mueller – they are so important to us. Nici has been our front-runner for us for almost a decade. He is a role model for all our juniors.

“I couldn’t be more proud of the boys tonight – what they have achieved is fantastic.”

The battle between Malaysia and Colombia would decide second place in Pool C, behind France, and a last 12 finish. Malaysian No.1 Eain Yow Ng, the 21-year-old world No.31, faced experienced Colombian Miguel Rodriguez, the former world No.4, for the first time. It was a blistering encounter in which the young Malaysian established a two-game lead before squandering three match-balls in the third to allow the ‘Colombian Cannonball’ to extend the match into a fourth game. “I know Yow can raise his level when he puts on the Malaysian shirt – it’s something he did for us last year at the Asian Games last year, when he beat Leo (Au) in the decider,” said Malaysian coach Andrew Cross. “He can put in those kind of performances. To beat a guy who’s been up at the top of the world rankings is impressive. It was great that he got us off to a great start.

“I thought he’d won it when he was 10-7 up in the third – and there were three pretty easy drop shots that he missed. But he really got back into it – it really was the performance of the day!

“Syafiq could then play with a little but less pressure than if we’d been one down. There are no easy matches in this team event. I thought he handled it OK. It was nice to have it wrapped up two love.

“That was what we wanted to do – make sure of a finish in the top 12. Originally, of course we had USA in our pool and that would have been tough – and Colombia represented a different challenge. We knew Colombia was going to be our match.”

Fourth seeds New Zealand came back from a shock earlier defeat by Scotland to despatch Singapore 3/0 in Pool D – event newcomer Lwamba Chileshe ensuring the win they needed to make the top 12 by beating the Singapore No.3 Brandon Tan 11-7, 11-6, 11-0. “I was really excited coming into the match,” said African-born 20-year-old Chileshe (pictured in action above) afterwards. “I just really wanted to play my best performance, I was a bit nervous at the start but I just tried to concentrate on my game and I’m really happy with my performance. It feels great to wear the fern for the first time at senior level.

“Everyone has been looking after me really well and has been giving me advice on what to do and what not to do. I’m a pretty consistent guy.”

When reminded of his team’s surprise defeat 24 hours earlier, NZ coach Glen Wilson said: “We shrugged that one off pretty quickly and focussed on the next one. The way the draw is set up means that you do get a second chance – it just means that we’re having to play a last 16 match tomorrow.

“We’ll have a good chat tonight about tomorrow’s matches – but we won’t know who we get until after the managers’ meeting tonight at 10pm. We’ll be looking forward to a good performance tomorrow – hopefully the boys can perform well for New Zealand and get the win.”

After earlier wins over Canada and Wales, former champions England clinched their position at the top of Pool B with a comfortable 3/0 victory against Nigeria – team top string Adrian Waller beating Babatunde Ajagbe 11-7, 11-5, 12-10 (both pictured below) before number three Declan James also defeated Adewale Amao in straight games. “The first job was to top the group – which helps in the draw for later on in the knockout stage – and we get a rest day now,” said England national coach David Campion. “We can relax for now and look at the draw later on, then start to plan and prepare for Thursday.

“There’s a different dynamic in the team now – we’ve got Adrian who’s our No.1 player and Declan who only a couple of months ago was our top player. We’re here with four very good players and it helps having players like James (Willstrop) and Daryl (Selby) who have had that experience of being in these key situations before and are very good at raising their level when the big matches are on.

“And Adrian had a fantastic result yesterday against Joel (Makin) and it’s good to have him here in good form.

“Most teams have got at least two players who are highly-ranked and any of those teams are a danger.” 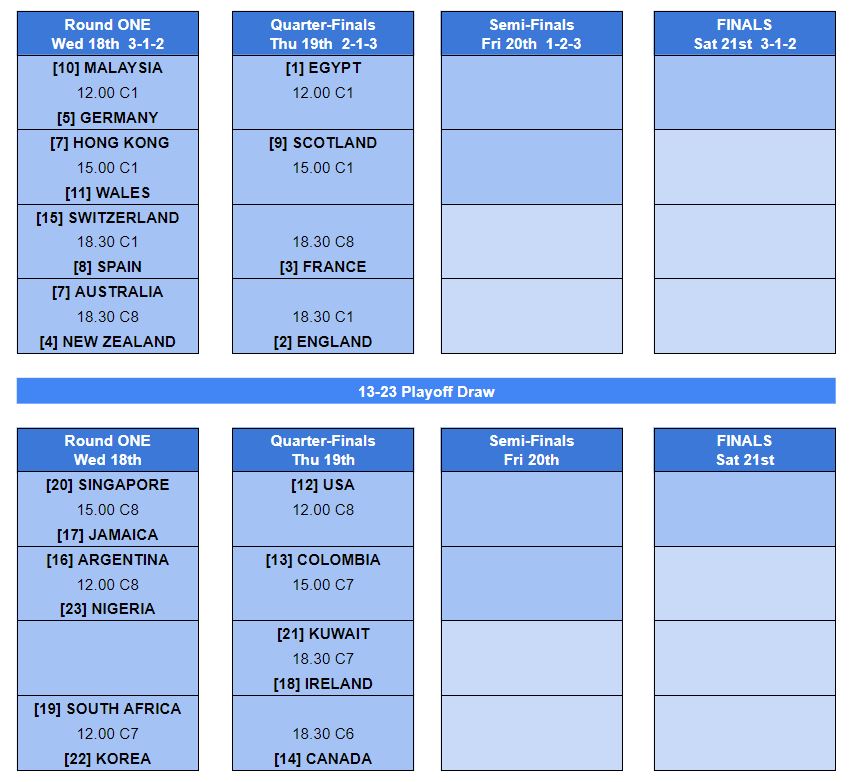