Quarter-finals night at Camana Bay started with an English double as Jenny Duncalf upset the seedings to beat compatriot Alison Waters in a five game marathon and Laura Massaro recovered from a game down against Low Wee Wern to reach her first World Open semi-final.

Raneem El Weleily also made a first semi-final as she found her shots to beat Natalie Grinham in three, and to finish Madeline Perry gave six-time champion Nicol David a real test before the world number one reasserted to win in four. 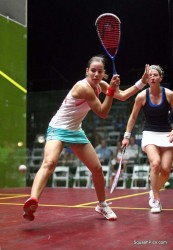 The first quarter-final of the Cayman World Open presented by BDO was an all-English affair between two opponents who know each other well but hadn’t played competitively for just over two years, but that didn’t show tonight as they fought out another five-setter that was as close as can be.

The opening game and a half were a bit scrappy – Duncalf’s description – as they got used to the slightly cooler, windy conditions, and it was Waters who won that segment of the match, taking the first 11/7 from 5-all, and going 7-2 and 9-4 up in the second.

That game turned into the one that no-one wanted to win – Duncalf came back to 9-7 more on the back of a lapse in concentration from Waters, and both mixed nice winners with inexplicable errors as the score crept up and up. Eventually Waters took it 19/17 with a trademark volley drop but Duncalf was well into the match now.

There were no big leads in the final game, both playing fluently now, and with hardly a point to split them the score reached 9-all.

A volley into the tin for once from Waters brought up match ball, which was decided with one of the best rallies of the tournament, Waters not quite catching hold of Duncalf’s crosscourt and tinning again.

Jenny has normally been the higher seed when these two have met, and the delight she showed on that final point spoke a lot of the trials she’s been through of last as her ranking has slipped. Another World Open semi-final does wonders for the confidence though. 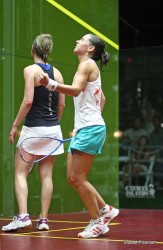 “It was a bit scrappy at the start, but in the second I was starting to feel much better, and even though I lost it I felt the momentum had turned towards me.

“On the final point I knew she would be there to hit a crosscourt but I played it anyway and fortunately it just clipped the tin. Delighted to win, a bit disappointed for Al too, but not that much!

“We all love playing here, the whole vibe is great and it makes you feel so relaxed on court – and it wasn’t too hot tonight which was a bonus!”

Massaro double up for English 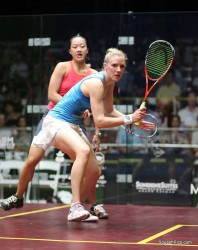 Laura Massaro made it two English semi-finalists with was was ultimately an impressive and dominant performance against Malaysia’s Low Wee Wern.

The match started out with controlled and patient rallies, and although Massaro opened up from 3-all to a 6-3 lead, it was the Malaysian who started to get the better of things as, much to Massaro’s frustration, Low moved ahead 10-7, taking the lead on her second game ball.

That proved to be a temporart blip as far as Massaro was concerned though as she proceeded to dominate the next three games, increasingly catching Low out with boasts and crosscourt flicks. 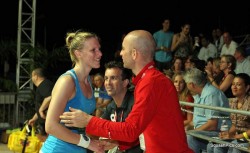 She established leads of 6-1 in the second, 9-2 in the third and 5-0 then 10-3 in the fourth, with cries of “Cmon” emanating regularly from Massaro herself and from watching husband Danny as the Englishwoman maintained her unbeaten record against Low to win in a round 45 minutes.

“She gets so many ball back, whenever I play her I have to try to keep my aggression up, that’s where all the “cmons” help. I’ve become better at dealing with the pressure of being expected to win over the last couple of years and that’s helped me improve my consistency and my ranking.

“I’m so pleased to make a first World Open semi-final, I’ll just take each match as it comes now.” 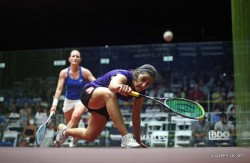 Second seed Raneem El Weleily won through to a first World Open semi – she was actually playing her first quarter-final – with a straight-games win over four-time finalist Natalie Grinham that was anything but straightforward.

Both have abundant racket skills and both are willing retrievers, and the match quickly settled into the expected pattern of short, sharp rallies with winners coming from unexpected places from both players, with of course a few tins thrown in for good measure.

From 5-all in the first the Egyptian found her mark enough times to build a 10-6 lead, finally taking the lead with Grinham closing, 11/9.

The second was even, all the way to 9-all, but a tin and a stroke did for the Dutchwoman as Weleily repeated the 11/9 score to go two up.

A 4-0 start for Grinham in the third, but Raneem’s shots were going in more consistently now and she levelled at 6-all with a volleydrop glued to the wall. More sublime shots took her to 10-6, and after missing out on the first attempt she took the match with a wrongfooting return of serve that left Natalie rooted to the T.

So it’s not to be a fifth final for Natalie, who will feel aggrieved not to get at leas a game, she certainly deserved that, but it could well be a first for Raneem. 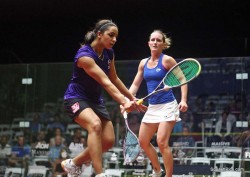 “I played better today than I did yesterday, and I’m thankful for that,” said the winner. “Natalie has great racket skills and it’s always difficulty trying to stay focused and consistent when you play her sdo I’m pleased I managed to do that today.

“I’m really happy to make a first semi-final and I hope I can play as well tomorrow and make the final.

“I haven’t seen much of the island so far, but I’ve seen lots of photos of the other girls with the dolphins. I haven’t been to see them yet, and I hope I don’t get the chance to!”

Nicol steps up in the end 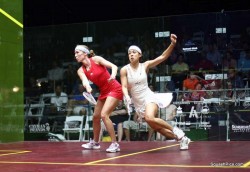 Defending champion and top seed Nicol David started the final match of the day well in control against Madeline Perry, taking the first game 11/3 with the Irishwoman struggling to get a foothold in the match.

David finished it in the same vein with Perry struggling to match the pace injected by the Malaysian who won the final game 11/3 as well.

But in between Madeling gave the world number one a really good challenge. During the second and third games there was hardly a rally that wasn’t long, well executed, and plain tough. Each one had to be won, and the 10th seed was winning her fair share of them, often outmaneouvring Nicol, which isn’t an easy thing to do.

Nicol always had a slight edge in the second, which she took 11/7 after being 10/5 up, but Perry was in the ascendancy y throughout the third despite Nicol’s best efforts, and they were considerable. Madeline moved to 10-7 with a lovely crosscourt finish to a well worked rally, thought she;d blown it when she tinned a sitter at the end of a similar rally, but held on to take a well-deserved game 11/9. 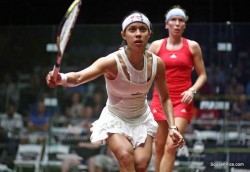 That was the end of it though as Nicol resumed dominance in the fourth. “It was a really good game, I enjoyed it,” said Madeline, “but once she stepped up the pace in the fourth I just couldn’t live with it any more.”

Nicol was as much relieved as pleased: “Very happy to win that,” she said, “Madeling kept plugging away and coming back at me even when she was 2-0 down. She was really firing it in and I knew I had to do something. I had to step my game up in the fourth and everything was coming off for me, but it wasn’t easy.

“It seems that everyone I play here I’ve played in finals before, it shows that the standard is so high and there’s no easy games! “ 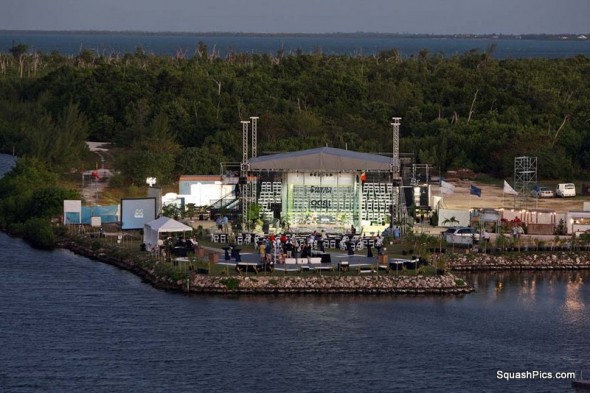 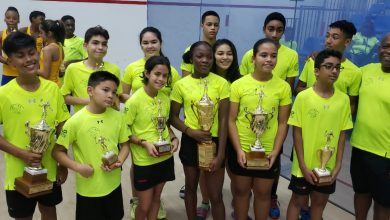 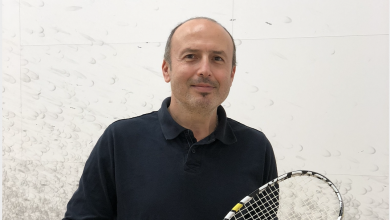