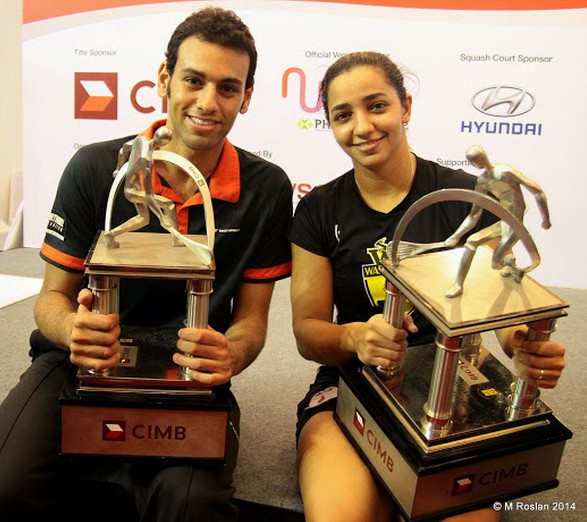 The third seed reached the final for the third year in a row after beating top seed Nicol David in the semis and dashing the Malaysian star’s hopes of a ninth title.

El Welily’s opponent Nour El Tayeb had achieved one of the best runs of her career to reach the final on the all-glass showcourt in the Malaysian capital’s Nu Sentral shopping mall: Seeded 16, the 21-year-old from Cairo upset second seedLaura Massaro, the world champion, and No8 seed Madeline Perry in quick succession before crushing Amanda Sobhy, the No10 from the USA, in just 26 minutes in the semis.

And underdog El Tayeb, ranked 25 in the world, took compatriot Welily the full distance in the final – eager to repeat her recent first ever win over the world No3. 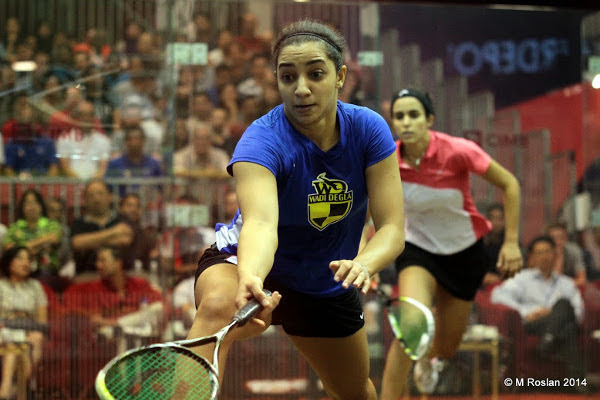 “Nour has done really well in to be in the final,” El Welily told Zheng Guan from The Star “We both have the same coach and we know each other’s games. That was obvious as she read my game.

“I think she is a very tough opponent to face as she is also very talented and has great racquet skills,” added the Alexandria-born 25-year-old (pictured below with men’s champion Mohamed Elshorbagy) who now has seven WSA World Tour titles to her credit.

“It was obviously a very tough mental game and I’m happy to have won it. Also I’m happy to win because it’s been a while since I’ve made a final!”

El Tayeb was far from unhappy with her performance: “I think I played well and I really gave it everything I had.

“Raneem is my big sister and I’m happy for her that she won the tournament.”

Egyptian Mohamed Elshorbagy, the 22-year-old World No.3 from Alexandria, picked up his ninth career title after defeating Hong Kong’s Max Lee in the final of the CIMB Malaysian Open 2014..
Having recorded impressive 3-0 wins over Kuwait’s Abdullah Al Muzayen, local hope Mohd Nafiizwan Adnan and compatriot Tarek Momen on his way to the final, Elshorbagy maintained his perfect record in the tournament, taking just 34-minutes to complete an 11-6, 11-7, 11-9 victory over the World No.25. 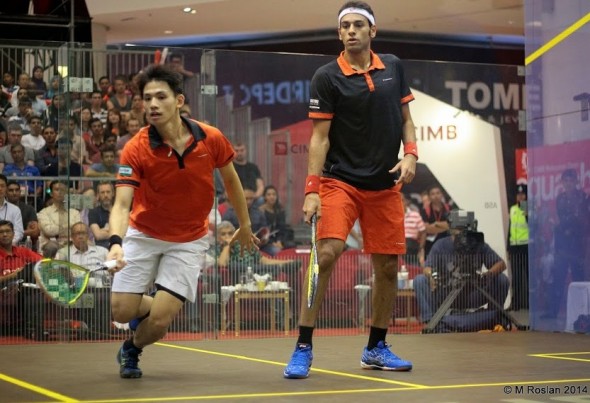 The win, his first ever title triumph at the Malaysian Open, sees Elshorbagy begin his season in formidable fashion as he travels to next week’s Cathay Pacific Sun Hung Kai Financial Hong Kong Squash Open 2014, the first PSA World Series event of the 2014/15 season.
Elshorbagy is seeded second for that event, with World No.1 Gregory Gaultier favourite for the crown, but having with a win to his name the rising young star will be hopeful of landing one of the sport’s most prestigious titles 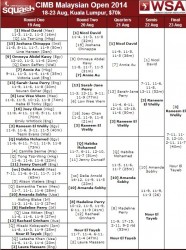 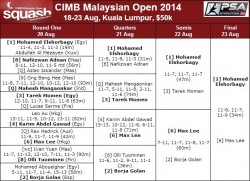