The finals of the 2016 Windy City Open presented by Guggenheim Partners and Equitrust Life Insurance Company, PSA World Series tournament taking place at the University Club of Chicago, will have a heavy Egyptian feel after three of four available berths in the respective men’s and women’s title deciders were snatched up by players from the Middle Eastern country. 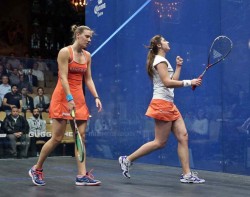 In the women’s draw in-form 20-year-old Nour El Sherbini, who last month claimed the first major World Series title of her career when she won the J.P. Morgan Tournament of Champions, followed up her impressive 3-0 win over Nicol David with a masterclass performance to beat pre-tournament favourite and World No.1 Laura Massaro.

El Sherbini played with unrestricted attacking flair throughout the match and underlined her position as a genuine top class contender by overturning a 2-7 deficit in the third game to take the match 11-7, 11-9, 11-9.

“I have been struggling with a flu so I really did not expect to reach the final but I think I played perfect today,” said El Sherbini.

“Because I was struggling with my breathing I was going for every shot and thankfully they were going in. Normally when I play Laura it is a tough five-game match so to win 3-0 is an achievement that I’m definitely proud of.” 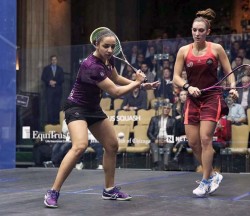 After stuttering through the early rounds of the tournament El put in a highly polished and focused performance to overcome Camille Serme of France 3-0.

“I tried to stay relaxed and play to my game plan and I think I focused well and managed not to get loose and play too many shots down the middle,” said El Welily.

“I’m very happy to be into the final again here in Chicago. I enjoy this tournament and it brings the best out of me and it is great that it is an all-Egyptian final and I’m looking forward to playing Nour.

“She’s in top form and played really well today so it should be a very good match tomorrow.”

In the men’s draw perennial foes Nick Matthew, the defending champion, and Mohamed Elshorbagy, the man Matthew beat to glory 12 months ago, will lock horns for championship bragging rights once again – just weeks after contesting the Tournament of Championship final. 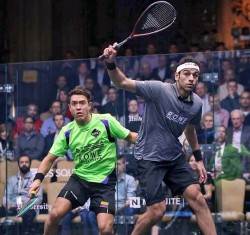 World No.1 Elshorbagy overcame the challenge of Colombian Miguel Angel Rodriguez, the man who knocked his younger brother Marwan Elshorbagy out in the quarter-finals, in straight-games to reach the final.

“Miguel has been playing very well in this tournament and especially against my brother yesterday but I have raised my game match after match and played some of my best to beat him today,” said Elshorbagy.

“He was playing strong at the end of the second and third as well so I’m happy to have gone through in three games and be back in the final.

“I’ve never won this tournament so it would be nice to get my name on that trophy and I can’t wait to come back and play on this stage tomorrow.” 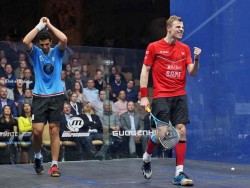 “I lost to him in US Open and that was the first time he beat me and it was a little bit on my mind today,” said Matthew.

“But I’m a different player than I was before Christmas so I wanted to carry on making that statement and prove it. He’s improved so much and I had to be very proactive and keep the ball away from his danger weapons so I’m happy to beat him.

“Mohamed (Elshorbagy) and I had a great final in New York and I beat him here in the final last year so i’m sure he’s going to want to prove a point. He’s the World No.1 for a reason but I believe that on my day in front of this crowd and support that anything can happen.” 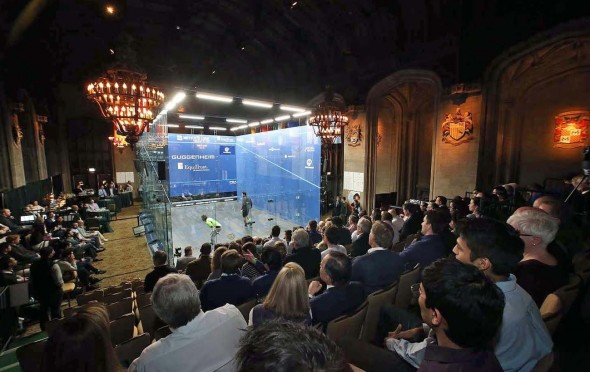