Egyptians continued their advance in the 2015 WSF World Junior Individual Squash Championships at the Squashtime Centre in Eindhoven in the Netherlands where quarter-final successes have already guaranteed the nation a men’s finalist for the tenth successive year and an all-Egyptian women’s semi-final line-up for the third year in a row.

But it was Saadeldin Abouaish who provided Egypt’s most unexpected success on day three when the 17-year-old from Cairo denied Tayyab Aslam an anticipated place in the final by beating the second-seeded Pakistani 6-11, 11-8, 11-5, 15-13 in 74 minutes – the longest match of the day. 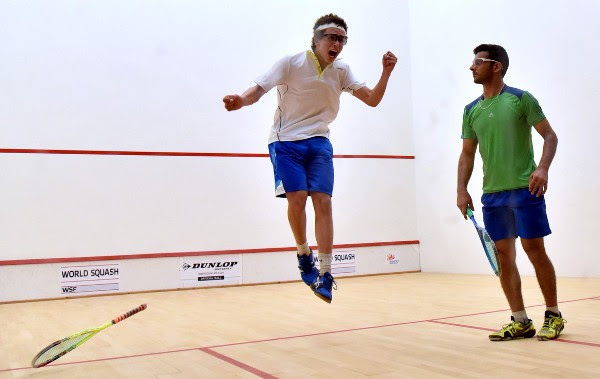 “That was one of the hardest matches I’ve ever played mentally,” admitted the surprise winner (pictured above in celebration) to the event website www.wsfworldjuniors.com later. “It’s one of my best ever wins and I still don’t know how I managed to come back like that – I’ve never reacted like that at the end of a match, ever!”

The triumph ensures Egyptian interest in the climax as the 5/8 seed will face fellow countryman Youssef Soliman. The 3/4 seed ended English interest in the event following an 11-8, 12-10, 11-4 win over 5/8 seed Patrick Rooney.

“We have a great team spirit and all wanted to do well, the pressure’s off a little tomorrow as there will definitely be an Egyptian finalist,” added Abouaish. “I play my good friend, and may the best man win!”

Egypt’s manager Omar Abdel Aziz was equally delighted: “It’s a great day for us, having six in the semi-finals,” said the former world No.31. “The girls have performed as well as ever, and the boys, after the disappointment of losing a 3/4 seed so early, brought the team together and made them determined to do well. I’m proud of them.”

“I was winning when I was playing aggressively,” admitted the 17-year-old from Kuala Lumpur. “But then he started coming back and I went a little too defensive, so playing like that at the end sort of worked against me but fortunately he made the errors in the end.

“I felt tired after yesterday’s match and thought he would be fresher, but once we started I could see that he felt as bad as I did, so that was a relief, but he got stronger as the match went on.

“Still, I’m happy it didn’t go to five and pleased to make the semis, it’s been a while since a Malaysian was there!”

Ng will now face Diego Elias after the top seed and defending champion from Peru produced his fourth successive straight games win in an 11-6, 11-8, 11-4 victory over Pakistan’s Israr Ahmed.

The most dramatic comeback took place in the women’s championship where Salma Hany Ibrahim, a 3/4 seed from Egypt marking her fourth successive quarter-final appearance, faced US hope Sabrina Sobhy, a 5/8 seed making her fifth successive appearance in the event.

Underdog Sobhy soared to a 2/0 lead before Hany reduced the deficit to win game three, then battled back from 1-6 down in the fourth to draw level. With both players giving everything they had, Hany managed to establish a lead in the decider, before finally taking the match 9-11, 7-11, 11-7, 11-9, 11-7 after 52 minutes. 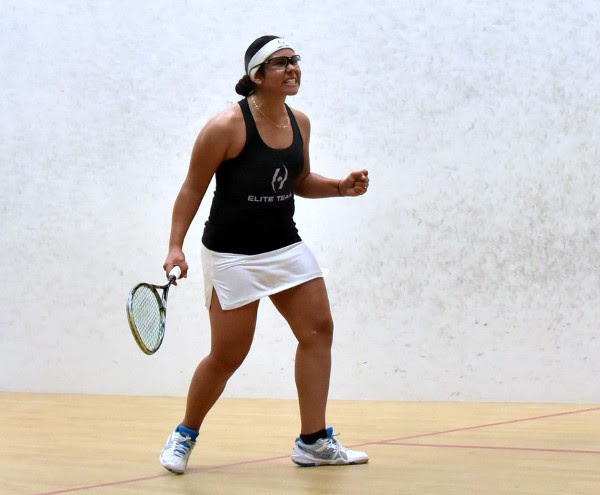 “She played so well at the start,” admitted the 18-year-old from Alexandria (pictured above after her victory). “She was causing me lots of problems and I couldn’t find a way to get to her shots. But I believed I could win and tried to take it point by point and managed to win the games that way.

“This is my first semi-final after losing in the quarters the last three times, so I’m really pleased – but I want to make sure I give it my all tomorrow.”

“Like yesterday, I started well, so relaxed, and then lost a bit of concentration,” said Metwally. “I managed to win by playing softly, trying to take the pace out it, but I went to sleep in the third but I was focussed from the start of the fourth and got my soft game back.

“I’ll be playing Nouran tomorrow, it should be a good match like our semi-final last year and our British Junior final.

Gohar is also looking forward to the semi-final clash: “I played better than I did yesterday,” said world No.15 Gohar, the highest-ranked player in the draw. “It will be a great game with Mariam, as usual, and I’ll put in every effort to reach the final.”