After split rounds in the first, second and quarter-final stages, the El Gouna International PSA World Series event – running alongside the Orascom Development PSA Women’s World Championship – is down to the last four in El Gouna, Egypt. 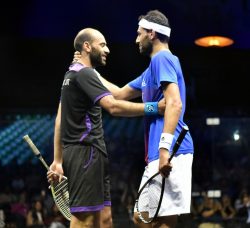 Egyptian World No.5 Marwan ElShorbagy claimed a second successive victory over older brother and defending champion Mohamed to set up a semi-final clash with World No.1 Gregory Gaultier.

Marwan claimed his first ever win over his Mohamed during February’s Windy City Open, resulting in an outpouring of emotion from both brothers in Chicago.

And lightning struck twice in El Gouna as Marwan outfought and outplayed his brother – who looked well of the pace – with an impeccable display seeing the 23-year-old Egyptian prevail in just 24 minutes by an 11-5, 11-2, 11-4 scoreline.

“I was thinking about it too much when I was leading in the fourth and fifth games in Chicago. Today it was a bit different because I didn’t want to let the emotions go to my head. Of course the emotions were still there, but maybe I was dealing with it better. I was focused from the first point to the last one.

“This is probably the best match I’ve played all season. Today couldn’t have gone any better for me, but I think it was a bad day at the office for him. It’s a big win for me, but I can’t celebrate it. It’s been a tough season for him, he’ll come back stronger though I’m sure. He just needs a good break.”

Marwan and Gaultier will face off in a repeat of the Windy City Open final, with Gaultier overcoming New Zealand’s Paul Coll by a 3-1 margin to extend his unbeaten run to 17 matches. 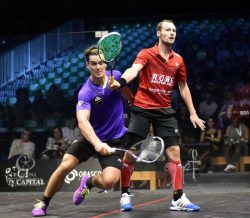 The Frenchman, who is targeting a fourth PSA World Tour title in a row, had an almost metronomic quality about him in the early stages as he dominated the court, with the ‘French General’ going two games ahead.

A resurgent Coll halved the deficit with victory in the third, but Gaultier soon found his way back on top again to close out an 11-6, 11-6, 11-13, 11-6 victory, reaching his seventh consecutive PSA World Tour semi-final.

“In the first two games, I made the good choices on court, but I should have won in three. He plays at such a pace and I feel I fell into his pace instead of pushing and forcing mine a bit.

“When you are a bit too confident, you can fall in the trap of getting a bit too passive and not aggressive enough. I just didn’t push myself enough. I have a lot of time for Paul. He is one of the players that have improved the most. He managed to break James [Willstrop] and other players in the top 10.”

The second day of quarter-final play saw both matches scheduled for the glass court – situated at New Marina on Egypt’s Red Sea – moved to the new squash complex in El Gouna due to unexpected rainfall, with World Champion Karim Abdel Gawad and World No.9 Fares Dessouky ensuring that at least one Egyptian will reach the final on home soil. 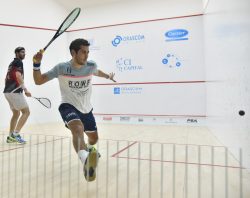 The new squash complex, which only finished construction in the weeks leading up to the tournament and hosted the qualifying stages and some of the early main draw fixtures, saw Gawad take on German No.1 Simon Rösner on the traditional court.

The pair matched each other point-for-point for the majority of the 52-minute encounter, with Gawad’s big-game experience and the roar of his home crowd seeing him prevail in the crucial points to claim an 13-11, 11-9, 9-11, 11-2 victory.

“When I heard that we were transferred, I was a bit frustrated,” admitted Gawad, who will overtake Gregory Gaultier at the summit of the World Rankings if he reaches the final of the World Series tournament.

“I hadn’t seen the complex at all, I had no idea what the court felt like, and I was really worried as Simon had played two matches there, when I hadn’t even seen the place.

“On the bus coming here, I told myself that all conditions were part of the game, that when you want to be a top player, you have to adapt to what the game throws at you. And I told myself, forget about the conditions, just get on with it.

“The fact it was a small venue had some advantages, there was a lot of support for me I felt, and they really helped at the times I really needed support. So being here had positives and negatives, I just had to deal with the negatives to overcome them and finally win against a tough opponent.” 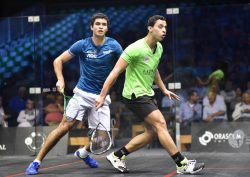 Dessouky stands between Gawad and a place in the final after the 22-year-old overcame Peruvian two-time World Junior Champion Diego Elias in a feisty clash, which saw both player’s engaged in a heated discussion as they walked off court after the culmination of an acrimonious encounter.

The match started on the glass court – with both players taking a game apiece – before play was delayed for almost an hour due to the rain. 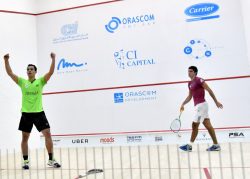 With the match relocated to the complex, Elias held four game balls in the third game, but squandered them to a resurgent Dessouky, and he held his nerve to triumph in a dramatic fourth-game tie-break to take it 11-7, 7-11, 12-10, 12-10 in a mammoth 127 minutes, taking into account the delay.

They join fellow Egyptian Marwan ElShorbagy and Frenchman Gaultier in the semi-final stage, which will take place on April 13.