There is guaranteed to be an Egyptian winner of the Orascom Development PSA Women’s World Championship for a second year in succession after World No.1 Nour El Sherbini and World No.4 Raneem El Welily prevailed on semi-finals day in El Gouna. 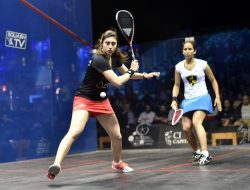 El Sherbini, who became the youngest ever female World Champion last year when she beat Laura Massaro in the final, was in cruise control in the opening two games against World No.5 Nouran Gohar, nullifying the 19-year-old’s hard-hitting brand of squash to go 2-0 up.

Gohar overturned five match balls in the third game to take the match into a fourth, but got herself back in front in the fourth to complete the win by an 11-4, 11-4, 13-15, 11-9 scoreline to stay in with a chance of being the first female Egyptian to lift the iconic title twice. 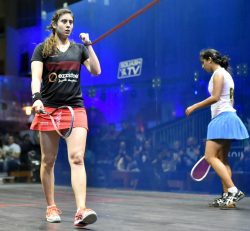 “It was a very tough match, Nouran is very young and very tough,” said El Sherbini.

“It would mean everything to become World Champion here playing in front of an amazing crowd.

“They always come to support us and watch us and I’m really glad that we’re having the World Championship in El Gouna. It’s really amazing I’ve reached the final and I’m going to give it everything I have to win the title here.” 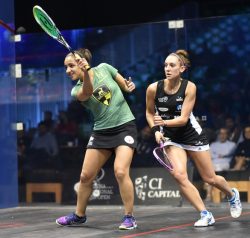 Meanwhile, El Welily will appear in a second World Championship final after she overcame French World No.3 Camille Serme in four games.

The 28-year-old from Alexandria squandered four match balls against Malaysian icon Nicol David in the final three years ago in Cairo, but she says that she has learned from that disappointment and it won’t be in her thoughts ahead of tomorrow’s final. 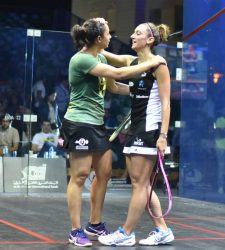 “[Losing the last World Championship] has been out of my mind for so long,” she said.

“It really doesn’t bother me anymore. I’m past it, I’m over it and I’ve learnt so much from it. I’ve become a much better player since then.

“I really appreciate that moment and if it happens again, although I really wish it doesn’t, I’m not going to regret anything.”