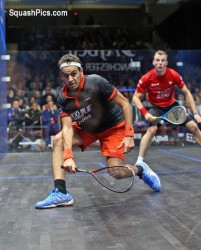 World No.1 Mohamed Elshorbagy dethroned England’s Nick Matthew 3-1 in the final of the 2015 AJ Bell British Squash Grand Prix to take the title in front of a partisan English crowd and collect his 15th PSA World Tour title – in what was his 100th tournament on tour.
Backing up from an intense 95-minute semi-final encounter against French World No.3 Gregory Gaultier, the 24-year-old Egyptian showed no signs of fatigue as he blasted out of the blocks in the opening game to impose his pace on Matthew and take the opening game 11-7. 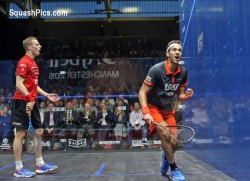 The wily 35-year-old veteran fought back in the second, mixing up his pace and variation to try and upset Elshorbagy’s rhythm, but he couldn’t convert and fell two-nil behind after a tense tie-break.

The man from Alexandria, who now resides in Bristol, England, continued to force the pace in the third but in a back-and-forth game it was Matthew who managed to squeeze it and keep his hopes of completing a hat-trick of British Grand Prix victories alive but it proved to be as good as it got for the Sheffield-man, as Elshorbagy pounced in the fourth game to secure the title 11-7, 12-10, 9-11, 11-6 in 65-minutes. 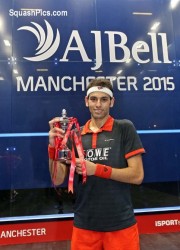 “Last year at this event it didn’t got well for me, losing in the quarter-finals, so it’s great to come back here this year and get my first title of the season,” said Elshorbagy.

“It was a challenge to back-up from yesterday’s big battle against Greg but those challenges are what I live for. I came out fighting for each point and I’m glad it turned out to be a great match and a great battle between us.

“I expect we’re going to have a lot more battles to come this season but I know I’ll be coming back next year to defend my title for sure.”

After his defeat Matthew said; “Obviously as a competitor you want to win but being in the final was more than I expected this week.

“So I’ve got to be over the moon with where I’ve got to. The pace in the first game took me by surprise but I’ll be a better player both mentally and physically for the rest of the season because of it.” 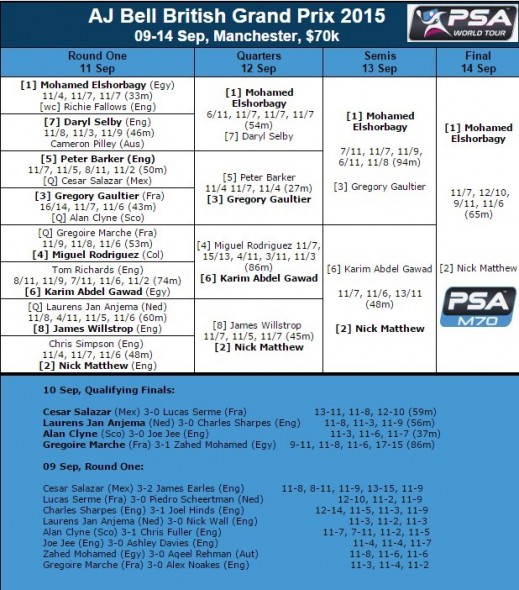