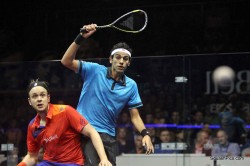 Sixth-seeded Egyptian Mohamed Elshorbagy upset England’s No3 seed James Willstrop in the quarter-finals of the AJ Bell PSA World Squash Championship at Manchester Central in Manchester to set up a semi-final clash with France’s No2 seed Gregory Gaultier.

Elshorbagy, the world No6 from Alexandria, was meeting England’s James Willstrop in a repeat of last year’s semi-final which went the full distance – with the Egyptian underdog prevailing in 112 minutes to reach the final as the No8 seed.

Since then, world No3 Willstrop has claimed two Tour wins over Elshorbagy – and boasts a 9-2 career head-to-head over the 22-year-old. 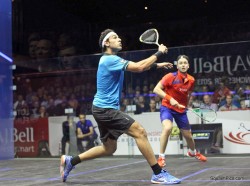 But Elshorbagy was in dominant form – winning the first game after a run of five points in a row from 2-3, and again jumping from 2-3 down in the second to go 8-4 up before forging a 2/0 lead.

But after Elshorbagy took the opening point of the third following a Willstrop error, the third-seeded Englishman crafted nine winners in succession to claw back the deficit.

At four-all in the fourth, Elshorbagy took a brief timeout for a ‘blood injury’ – and it was neck-and-neck thereafter, with Willstrop leading 9-7. 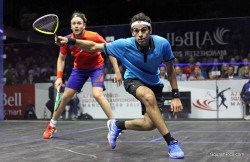 “The first game was crucial – and winning it gave me huge confidence for the whole match. I knew he’d start the second well – and I wanted to get a big lead. I thought I did that well.

“I felt I was playing his game better than him – then I started to play the game I wanted. 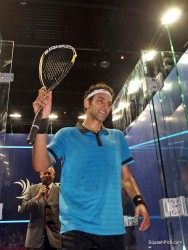 “I think I will be fresh tomorrow. I’ve got my team with me – my father, mother and my brother – and I’m speaking to Jonah (Barrington) every day. He gives me lots of mental confidence – he understands how my brain works. I believe I can beat any player.”

It was a demoralised Willstrop who tried to explain the outcome later: “I lost context, I lost perspective. I don’t like losing.

“I felt happy as I walked onto the court – I was in a great frame of mind. It was a great atmosphere and a fantastic crowd.

“At 9-7 in the fourth, I felt really good and thought I could win the match. I thought I was turning it round.”

“It’s hugely disappointing – but credit to him, he’s a good player.” 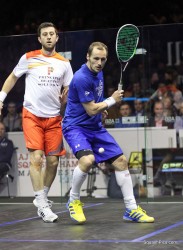 Later Gaultier became the only player to reach the semi-finals without dropping a game when he beat surprise English opponent Daryl Selby.

The 13th seed from Essex reached the quarter-finals for the first time after upsetting Egypt’s No5 seed Karim Darwish, a former runner-up, in the previous round.

World No2 Gaultier is enjoying the best form of his life, with final appearances in his last three Tour events. The 30-year-old from Aix-en-Provence raced to a 7-2 lead in the opening game before Selby, ranked nine places lower, took three points in a row – but was unable to stop the Frenchman establishing a 1/0 lead.

The second followed a similar pattern – but this time Selby was only able to win four points before Gaultier moved 2/0 up.

“I’m probably in the best shape of my life,” Gaultier told MC Andy Kay afterwards. “I’ve been playing well over the last few months. Tonight I had a lot of motivation and lots of confidence – and I didn’t feel under any pressure.” 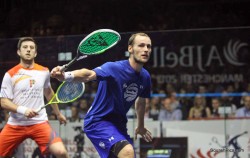 The French squash star continued by paying tribute to Willstrop, the loser of the earlier semi-final whose partner Vanessa Atkinson is about to give birth to their first child. “As a new father, I think my baby is better than being world champion.”

Gaultier later admitted: “I started really well in the match, was really focussed and for two games I was really on fire.

“But he raised his game in the third and made me really work hard for every point.”

Selby agreed that his opponent is in the form of his life: “He played a spectacular game against Nick (Matthew) in the final of the US Open last month.

“But I really wish I’d won that third game.

“The crowd was amazing – all squash players dream of having a crowd like that behind them. I hope they do the same for Nick tomorrow, which might help carry him into the final.” 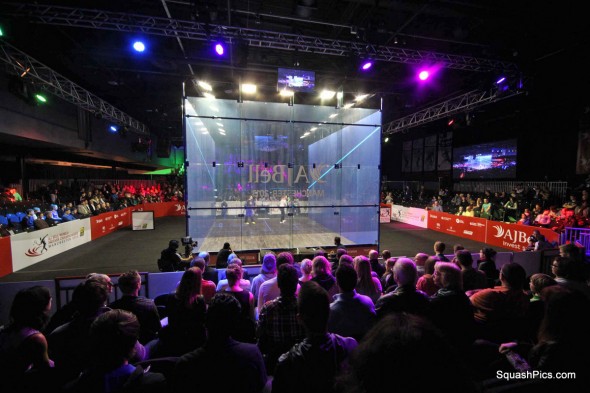