England is predicted to win singles gold in both Squash events in next month’s Commonwealth Games for the first time, following the revelation that Nick Matthew and Laura Massaro are top seeds in the men’s and women’s events, respectively, based upon the March PSA rankings.

Squash is celebrating its sixth appearance in the Commonwealth Games since making its debut in 1998 in Malaysia. The Men’s and Women’s Singles Championships will take place at Oxenford Studios in Gold Coast, Queensland, Australia, from 5-9 April, followed by the Men’s, Women’s and Mixed Doubles events from 10-15 April. 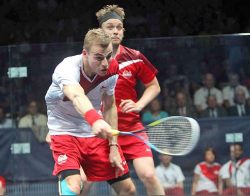 Matthew is bidding for a third successive gold in his final season as a professional. The 37-year-old former world No.1 from Sheffield, a three-time World Champion, reached the semi-finals in his first appearance in the Games in 2006 in Melbourne before striking gold in 2010 and 2014 in Delhi and Glasgow, respectively.

“The Commonwealth Games has been a key landmark in my career as a whole and also in this final season,” said the distinguished Yorkshireman. “It’s something I earmarked to prepare and peak for a long way out and am getting more and more excited the closer it’s getting.

“Winning Gold in both Delhi and especially Glasgow (with the circumstances of my hampered preparation for knee surgery) are right up there with the highlights of my career. I’m hoping my preparation is a lot less stressful this time and I go in to Gold Coast with the very best possibilities of winning Gold.” 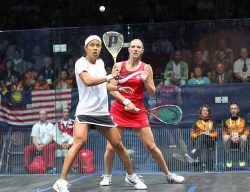 Massaro, also a former world No.1 and World Champion, is marking her third appearance in the Games. The 34-year-old from Preston reached the quarter-finals in 2010 and celebrated Silver in 2014 – on both occasions losing out to Malaysia’s formidable Nicol David.

“I’m really excited to be playing in my third Commonwealth Games,” said Massaro. “It’s an honour to be part of Team England travelling to the Gold Coast.

“I have three silver medals from previous Games and obviously adding gold to that collection would mean a great deal. However, I’m training as well as I can in the lead up and competition is fierce this year so I want to go to the Games and do everything I can to achieve the best position I can. Whatever happens from there I will be very proud of those performances.”

David, from Penang, is the only player celebrating a sixth Singles appearance in the Games after making her debut on home soil in 1998 as a 15-year-old! Now 34 and seeded three in Gold Coast, David is also targeting a record third successive gold medal. 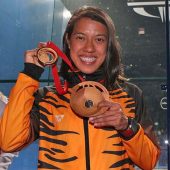 “It is truly a great honour to represent my country and to still be able to participate in the Commonwealth Games as it is the highest level multi-sport Games for squash’s participation,” said David, who topped the world rankings for a record 109 unbroken months from August 2006.  “The significance of a medal in this Games means a lot to me and to have won Golds before has a very special place in my heart.”

Recalling her 1998 debut, David continued:  “The best memory of the 1998 Commonwealth Games in Kuala Lumpur would have to be the Opening Ceremony and being the host country coming into the main stadium at the end. I was 15 years old and to be part of the Malaysian contingent being cheered on by 80,000 people in the stadium just blew my mind. I still get goosebumps thinking of that very special moment.”

On the prospect of winning a record third gold medal, David concluded:  “It will definitely be a huge bonus of course. As for me, I’m just so happy I’m able to participate in another Commonwealth Games and giving it my all there again. Can’t wait for the Games to begin!” 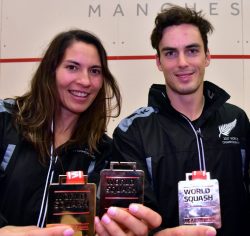 New Zealand appear to represent England’s biggest double gold threat with Kiwis Paul Coll and Joelle King, ranked 11 and 7, respectively, in the world, both the second seeds. Coll, 25, made his debut in the 2014 Games, while 29-year-old King was a double Doubles medallist in 2010 and achieved Singles bronze in the Glasgow Games.

“I’m really excited about this year’s Commonwealth Games being so close to home,” said Coll. “I have a lot of family and friends coming to support me!

“Obviously it’s a very important event for me – I always loving playing in Black! I decided not to play any tournaments in PSA over the last five weeks before the Games to train and come in fresh!!

“I can’t wait to be back in the NZ team environment – we always have a hell of a time!”

Players from 28 nations will be competing in the two singles competitions, the full draws for which (including seeding) are as follows: