Events held all over the globe on World Squash Day helped to attract new players and raise the profile of the sport.

Key events on opposite sides of the world, in Birmingham and Brisbane, were built around the Commonwealth Games and a subtle nod towards the Olympics.

Sarah-Jane Perry and Alison Waters joined Mike Harris, head coach at Wolverhampton Tennis and Squash Club, and his wife Vicky to celebrate World Squash Day at the University of Birmingham, which is the host venue for squash at the  Birmingham 2022 Commonwealth Games.

Sarah-Jane played Perry the Bull (the Birmingham 2022 Mascot) in a match billed as Perry v Perry and they also joined Mike Harris on the mini court for a game.

Sarah-Jane, who is an ambassador for Birmingham 2022, had an eventful trip home from the US Open, being forced to switch her flight from Philadelphia to New York, and she was still without her bags after they’d gone missing from her journey home.

WSF President Zena Wooldridge said: “World Squash Day is a celebration. It’s also a campaign, the mini court is both ideal in terms of its size relative to the target audience. The great thing with the kids is those small courts are really attractive, they’re fun, they’re accessible, so we can take them anywhere.

“I think that’s just fabulous in terms of accessibility to our sport.”

Mike Harris said: “Not only are we celebrating World Squash Day, we are also taking the game out to the community and this is so important for us as a sport. 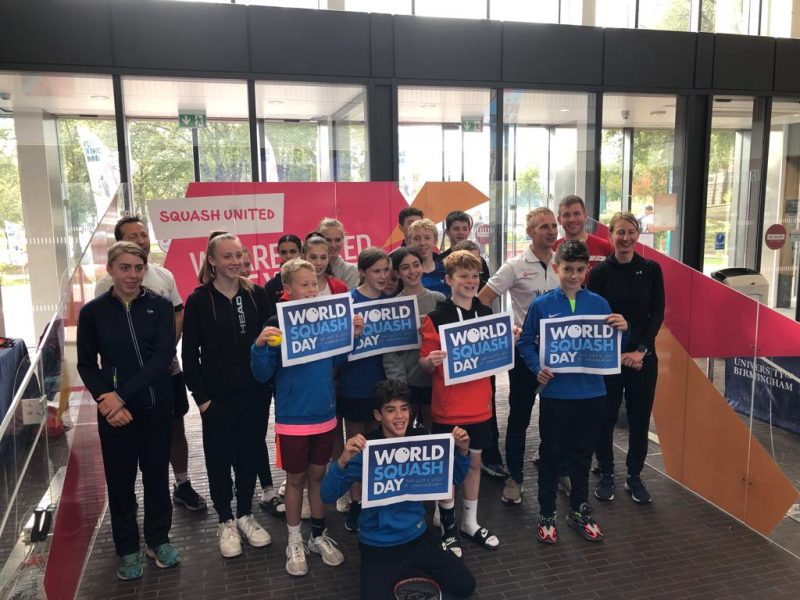 “The whole point of the mini squash court is to make our amazing sport visible and we have now given 5,500 young people on seven roadshows an opportunity to give squash a go.”

On all these roadshows, Mike and Vicky are joined by local coaches from clubs where they hand out flyers offering free taster sessions at the clubs.

In Australia, the Daisy Hill Squash Club held a 2032 Marathon (lasting nearly 34 hours) in the Logan City suburb of Brisbane, host city of the 2032 Olympic Games.

For the final 10 minutes, club owner Brad Hindle, a top coach and former PSA World Tour player, was joined on court by an Australian government minister.

Mick De Brenni, the Minister for Energy and Resources, said how impressed he was by the growth of squash that Hindle has achieved since taking over the club and hoped that local players would get the opportunity to represent Australia in their home city in the 2032 Olympics.

Hindle said: “The marathon was exhausting but well worth it. We had players on court right round the clock. They were raising funds for junior squash in Queensland and almost making a strong case for this great game of ours to be included in the Olympics here in Brisbane.

“This was all about helping the current and future generations of junior players in the hope that some of them might get the chance to play for Australia in the Olympic Games.”

Egypt, the nation currently dominating both the junior and professional ranks, celebrated World Squash Day with a massive tournament at the Black Ball Club.

The Black Ball Championships featured junior and Masters events, with hundreds of juniors showing their love of the game in a photocall outside one of the world’s most impressive squash venues.

Hundreds of events around the globe also involved junior clinics and ‘Bounce Back’ campaigns to welcome former players and attract a new generation of enthusiasts.

World Squash Day founder Alan Thatcher said: “Despite Covid restrictions in various countries, the day was a great success on so many levels. 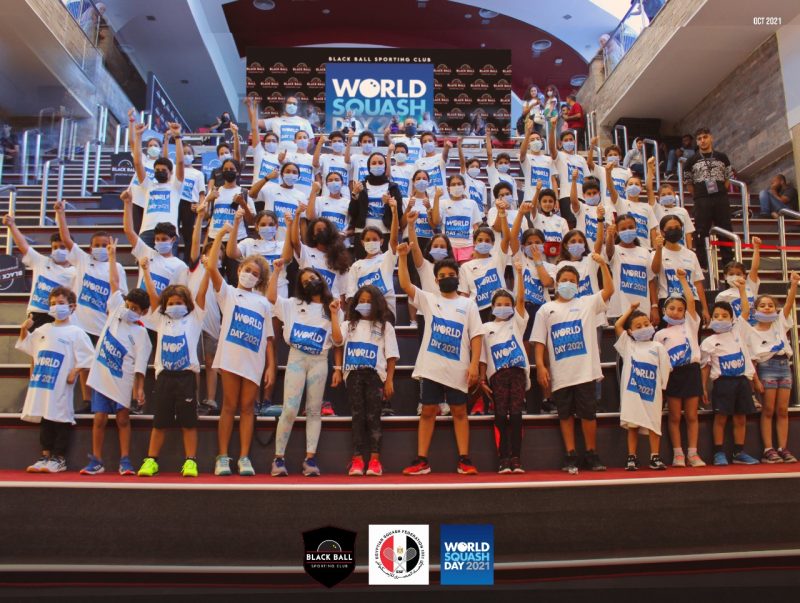 “It was good to see clubs and federations enthusiastically embrace the Bounce Back theme of fun events to attract new players, and once again we achieved some significant traffic on social media.

“We saw so many great events helping to fly the flag for squash, involving a range of abilities from beginners to the world’s leading players. It’s a great opportunity for the worldwide squash community to get together and join forces to promote the sport.”