Only Englishman Richie Fallows and Qatar’s Abdulla Mohd Al Tamimi stand in the way of an Egyptian double in the WSF World Junior Squash Championships in Poland after today’s quarter-final action in the World Squash Federation event at the Hasta La Vista Club in the historical city of Wroclaw.

Fallows, a 5/8 seed and runner-up in the recent European Junior Championship, claimed an unexpected place in the semi-finals after twice coming from behind to beat Egypt’s Mohamed El Gawarhy 7-11, 11-4, 11-13, 11-8, 11-9 in 80 minutes – the longest match of the tournament so far. 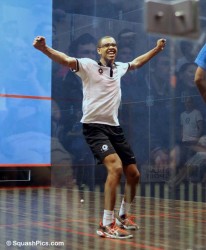 “It was a really tight game which almost slipped away from me,” said the 18-year-old Londoner afterwards. “I think God was on my side today, especially when I think about that backhand shot that went off my frame and helped me win the point at nine-all in the fifth!

“Who would I rather play in the semis? Nobody really. At this stage it’s always anybody’s game.”

Fallows now faces Karim Ayman Elhammamy, the second-seeded Egyptian who ended Kuwait’s historic run in the championship when he recovered from a game down to remove 5/8 seed Yousif Nizar Saleh 9-11, 11-5, 11-8, 11-7.

“Losing the first game was disappointing, but I was still getting into the game,” said Elhammamy. “I’m that sort of player who gets better as the match progresses. I play Richie (Fallows) in the semis, who I’ve never met before. We’ll see how it goes.” 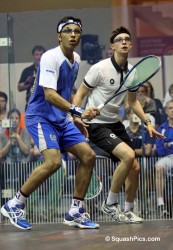 Al Tamimi is also seeded in the 5/8 group – and was also marking his country’s debut appearance at the last eight stage of the championship. The Doha teenager ended English schoolboy Lyell Fuller‘s run by beating the unseeded 17-year-old 12-10, 11-8, 11-6.

The 18-year-old Qatari faces his sternest test when he takes on Egypt’s Fares Mohamed Dessouki for a place in the final. Favourite Dessouki stopped 5/8 seed Diego Elias, Peru’s first ever competitor in the championship, 11-9, 9-11, 11-5, 11-4 in 65 minutes. 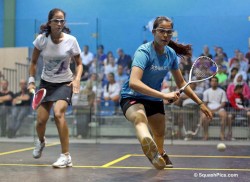 “I actually have a rather good record against Nouran Gohar,” explained the victorious 5/8 seed later. “I’ve played her perhaps 20 times in Egypt, not losing many of these, and I beat her in a tournament two weeks ago, 3/1.

“Today I could repeat that, having match point at 2/1 up, but I let that chance slip and she won the game. Luckily I wasn’t made to rue that later on,” added the 16-year-old.

“Why wasn’t I celebrating at the end? I was in a bit of pain because of cramp in my foot which I got at 8-5. I somehow managed to get through anyway!” 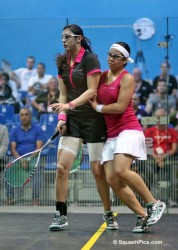 The other women’s semi will also be a surprise all-Egyptian affair between favourite Nour El Sherbini and 9/16 seedHabiba Mohamed Ahmed Alymohmed. 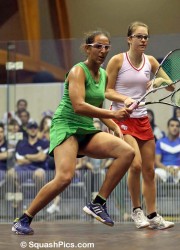 “I never played Salma Ibrahim Ahmed in a competitive match before even though we often play exhibition matches,” said El Sherbini, the world No11, afterwards. “I think I did good, I’m quite satisfied with my performance.

“Tomorrow I play the young Habiba Mohamed whom I’ve also never faced before. We’re from the same city, but from different clubs.”

A confident Habiba Mohamed denied being nervous about her semi against fellow Alexandrian El Sherbini – and not surprised by today’s win: “Was I expecting the win? Perhaps a bit yesterday and much more today. It’s a big deal as I’m younger than her and at only 14 years I’m in the semis!

“Am I nervous? Not at all. Why should I be? There’s no pressure on me from now on.”