The Federación Panamericana de Squash (FPS) carved another piece of history into the books as it hosted its first-ever virtual Annual General Meeting on Saturday November 28, 2020 with over 28 participants representing 16 countries.

Louis-Marie praised Samantha for the great honour she has brought to squash, being elected as the first president of the ACODEPA Athlete’s Commission. He emphasised the need for squash to remain in the Pan Am Games and hoped to see more World Championships hosted in Pan America. WSF President Fontaine echoed the importance of squash staying in all multi-sport games and also congratulated Pan America’s top 10 ranked PSA players: Amanda Sobhy, Diego Elias and Miguel Rodriguez.

Following the standard opening meeting protocols, President Francisco Paradisi outlined the framework of his yearlong negotiations between the FPS and Panam Sports to ensure squash remained on the Pan Am Games program in Santiago 2023. He gave a compelling argument for the need to increase the membership dues in order to fulfil all the conditions set by Panam Sports and thanked the WSF for both their support and financial contribution to help the FPS meet all the conditions. The motion to increase the annual membership dues was quickly approved.

Eighteen motions for additions, modifications and/or clarity to the FPS bylaws were unanimously passed with highlights being the addition of a new FPS Athletes’ Commission, greater gender balance on the FPS Executive Board aligning with IOC guidelines, and the addition of a new Election Panel to facilitate better governance during election years.

In closing, the President acknowledged the introduction of a new FPS Awards program and thanked the guest speakers for their valuable participation in the assembly; a solid testament to the FPS. The President further praised all the participants for their invaluable support of the motions and for their continued support throughout the year. He adjourned the meeting by wishing everyone good health and happy holidays and for a prosperous year ahead. The meeting ended with the intent of seeing each other face to face this time next year.

Squash Player: A String in the Tale 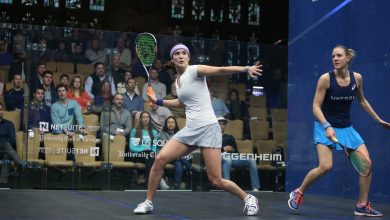