Sarah Fitz-Gerald has become the fifth “Legend” to be inducted into the Squash Australia Hall of Fame, joining some of squash’s greatest names in being recognised in this manner by the sport’s governing body.

She now sits alongside Heather McKay, Ken Hiscoe, Geoff Hunt and her great friend and rival Michelle Martin in the elite group.

Fitz-Gerald, 43, is recognised as one of the top women’s squash players of all time and as one of Australia’s greatest ever sportswomen.

She won 65 titles from 94 finals appearances and represented her country on 76 separate occasions, most recently when she came out of retirement to help Australia win the Women’s World Teams Championship in New Zealand in 2010.

Fitz-Gerald’s glittering career started when she won the World Junior Championship in 1987.

Fitz-Gerald has also been a tireless advocate for squash off the court and has held numerous coaching and administrative roles.

She was on the board of the Women’s Squash Association (WSA) for 11 years including a stint as President and she is also a former Squash Australia board member.

Yamba’s Cameron Pilley was also named as the senior athlete of the year following a year when he won bronze medals at two major championships, the WSF World Cup and the Men’s World Teams Championship.

Pilley also reached a career-high world ranking of 11 during the year.

Brazier’s coach, Marc Forster, was named coach of the year. 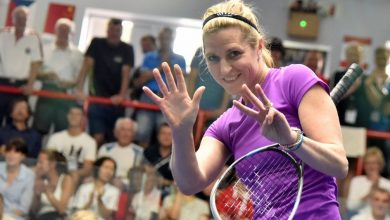