The latest WSF Ambassador Programme has “inspired” the impetus for Squash in Papua New Guinea, said the PNG Squash President Edmond Pereira at the end of the four-day visit to the capital Port Moresby this week.

Malaysia’s world No7 Low Wee Wern and Australian number one Cameron Pilley spearheaded the World Squash Federation international promotional initiative devised to highlight the appeal of Squash in countries where the sport is at a developing stage. Launched three years ago, the programme was making its first foray into the Oceania region. 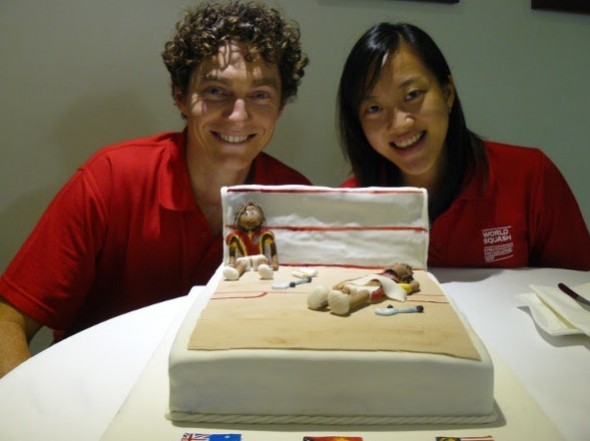 As well as the two leading players, the team also featured Australians Marc Forster and Nathan Turnbull, who provided coaching and refereeing workshops, respectively, and was led by WSF CEO Andrew Shelley.

The programme included a press conference at the Airways Hotel, a visit to the PNG IOC HQ in Port Moresby, plus a number of squash sessions at a variety of locations which included training with members of the PNG national squads, plus local school children and sponsors, as well as exhibition matches between Pilley and Wee Wern. 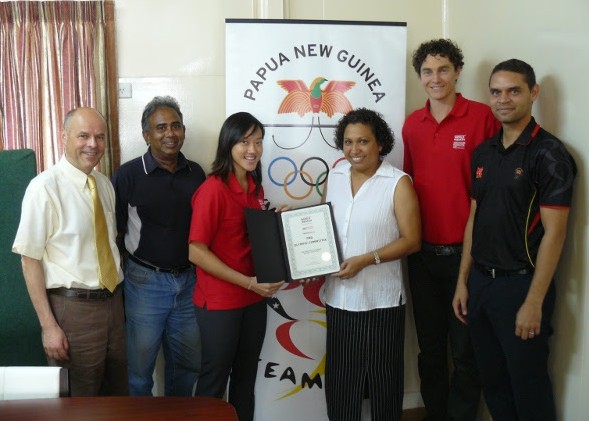 “The visit has been excellent for us in terms of promoting the game,” said PNG Squash President Pereira. “It has inspired us to continue the development work that we have started for the growth of the sport in the country and its long term sustainability.

“Hopefully, in the future, we can produce some world class players in the sport.

“It’s also been great to see some of our former players coming back ¬- many now successful businessmen in the region – and seeing what our new vision is, seeing what we’re doing to promote the game.

“We hope this visit has given our supporters and people in government circles the chance to see how we could learn from what has happened in other countries – for instance Malaysia, where their success today can be traced back to 1991 and the development plans they put in motion after they won the rights to host the 1998 Commonwealth Games, where squash made its debut. Wee Wern is a product of that programme.

“Furthermore, the experience our players have had in seeing Cameron and Wee Wern in action, and also being on court with them, has been invaluable – giving them the chance to see how much they need to improve their game.

“For the elite players, the 2015 Pacific Games here in PNG is what we’re targeting – though we are also sending an eight-man squad to next month’s Commonwealth Games in Glasgow and two players to the 2015 Commonwealth Youth Games in Samoa in 2015.

“What this WSF Ambassador visit has given us can only lead to a better development strategy in the future.

“I thank you for making the effort in coming across the world to promote this wonderful sport,” Pereira concluded.

Cameron Pilley, who was a finalist in the PNG International in both 2004 and 2005, was delighted to make his debut as a WSF Ambassador: “It’s been an honour to represent squash on this WSF Ambassador Programme and help to spread the word about our great game around some of the smaller countries.

“It’s been 10 years since I was last here – but the memories came flooding back,” added the 31-year-old from New South Wales. “The people here are so great, really friendly with great hospitality.

“Getting on court with the kids – some of whom had obviously never seen squash before – was really good. And some of them were absolute naturals, taking to it like a duck to water!”

There are great expectations of local player Linette Vai, a 15-year-old from Port Moresby who recently moved to Penang in Malaysia where she is educated at a local international school and trains with Wee Wern and her coach Aaron Soyza.

“This has been a great experience for all of us – we haven’t seen play at this level here before,” said the teenager. “Both Cameron and Wee Wern are very strong.

“And the coaching and refereeing sessions with Marc and Nathan were also so helpful.”

Low Wee Wern, a three-time Asian Junior champion, was also celebrating her first time on the WSF programme: “It’s been a great experience. Playing with youngsters like Linette so reminded me of when I grew up in Penang, knowing nothing about squash in the early days and playing in plaster-walled courts with no gallery!

“It was really good to see kids from the Gordon International School on the first day, most of whom had never been on a squash court before – then coming back on the next day because they enjoyed it so much! They were so keen. 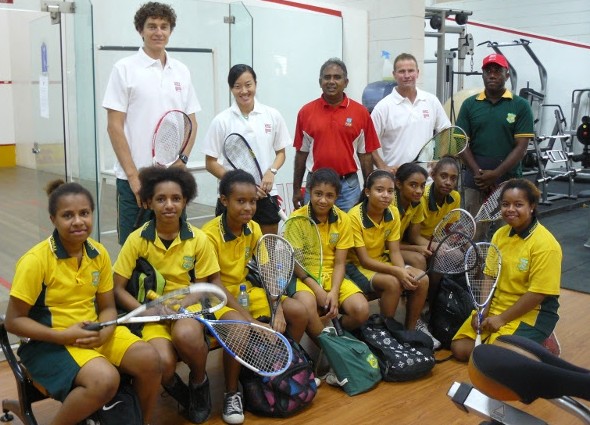 “Coming from Malaysia, where we now have such a good national development system going, it was quite an eye-opener to see the limited opportunities here, with few courts, limited availability of rackets, etc.

“I was overwhelmed by the reception I was given by the Malaysian community here too,” added 23-year-old Low. “I knew the Embassy had arranged a meeting, but I didn’t expect about 30 Malaysians to join the High Commissioner himself at a reception. It was like a mini-Wedding!

“And to have a send-off at the airport, too, as we left was just amazing!”

As a precursor to a Commonwealth Games Federation-funded WSF Coaching workshop in Papua New Guinea later in the year, Coaching and Refereeing workshops attracted significant numbers.

“Being part of my first promotional squash trip outside of Queensland was an amazing experience,” said WSF RefereeNathan Turnbull. “There were some very keen referee prospects in PNG – and I will continue working with these referees over the next 12 months to help get them accredited.

“The hospitality from the whole squash community in PNG was amazing, seeing a new bunch of juniors some of whom had never played before.” 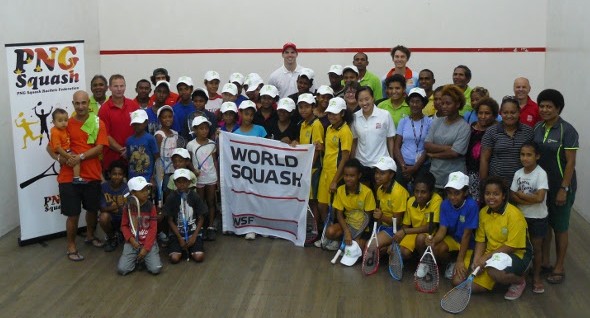 The WSF team pictured with participants and members of PNG Squash

Andrew Shelley summed up the WSF response: “The WSF Ambassadors Programme is intended to support the efforts of nations – but it really energises us too. You cannot help but be impressed by the national development work and our own desire to help is re-vitalised. PNG have done just that for us.

“We hope that the national TV and general media attention the visit enabled, coupled with governmental, business and squash community interest, will provide a real leg-up to the Federation in PNG.”

The WSF Ambassador Programme first visited the Baltic country of Latvia in 2011, followed in 2012 by a trip to the African countries of Malawi and Namibia, before last year taking in Panama and Venezuela.