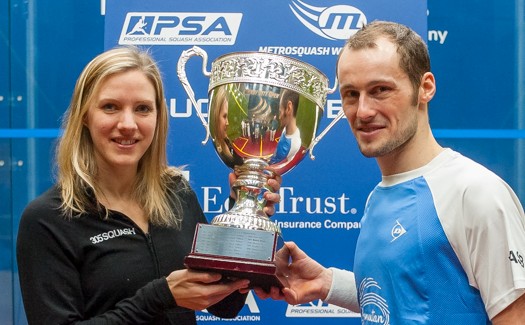 The Frenchman took just 25 minutes to ease past a visibly hampered Ashour, whose recent run of bad luck with injuries appeared to resurface in his eighth title match-up with Gaultier, taking the match 11-7, 11-3, 11-4.

The victory gave Gaultier his first win over the Cairo-native in nine attempts, but he celebrated in reserved fashion.

“It is tough to win in this way and it makes it hard to enjoy the victory in the same way,”said a subdued Gaultier after the match.

“It is not enjoyable when you see your opponent injured and he has had so many injuries in the past and it is a shame as he is such an unbelievable player.

“But I am happy with how I played through the whole week. I had some tough matches and of course I’m happy to win the trophy as it is these moments that we all work so hard for.”

Victory saw Gaultier add to his 25 PSA World tour titles exactly a decade after losing in his last appearing in the final at the University Club of Chicago, when he lost to Nick Matthew, and lift a trophy for the first time since the 2013 US Open in October.

“I’ve lost a few finals here and a few in my career and obviously I always try to change that,” he said.

“The level of competition with guys like Ramy, Nick (Matthew), Mohamed (Elshorbagy) and all the others guys is so tough that there are only small things that make the difference now.

“Without all my team at home and the support of my family and sponsors I would never be in these finals and these moments would never happen so I’m really thankful to them.”

Speaking after the match, Ashour said: “I’m happy I reached the final today but I felt a little niggle.

“Sometimes these things get in the way of your dreams but that takes noting away from Greg’s win as he’s an incredible athlete.”

England’s world No2 Laura Massaro stormed to her 13th title on the WSA World Tour  when she beat Raneem El Welily, the world No3 from Egypt, in the final.

“I WON THE WINDY CITY OPEN IN CHICAGO!!” screamed the exuberant 30-year-old from Preston to her Twitter followers later. “So happy!! Thanks everyone for the support! Celebration time!!”

Massaro went into the match 10-6 ahead in her career head-to-head Tour tally with El Welily – but the younger Egyptian was the winner the last time they met, in the Malaysian Open semi-finals last September.

After the first two games were shared, “Raneem held her first significant lead of the night when she went up 8-5 in the third, but Laura quickly went ahead and closed 11-9,” explained event spokesman Jim Wellington.

With an error-free run in the fourth, when she dropped just three points, El Welily drew level.

But errors from both players in the decider took the score to 8-4 in Massaro’s favour. “Down 5-9, Raneem chose serve to Laura’s forehand and started really smacking it,” continued Wellington. “Laura hit the tin but followed it up with a winner, and then a stroke to take the match.”

A disappointed El Welily said after the final: “I think tonight’s match was a cycle of up and down patches from my side. I had an opportunity in the third at 8-5 up that I didn’t make good use of.

“So obviously a little bit disappointed but all credit to Laura who played really well throughout the entire match,” added the Cairo-based 25-year-old. “I believe it was the crucial moments that made the difference and she definitely managed them better than I did.” 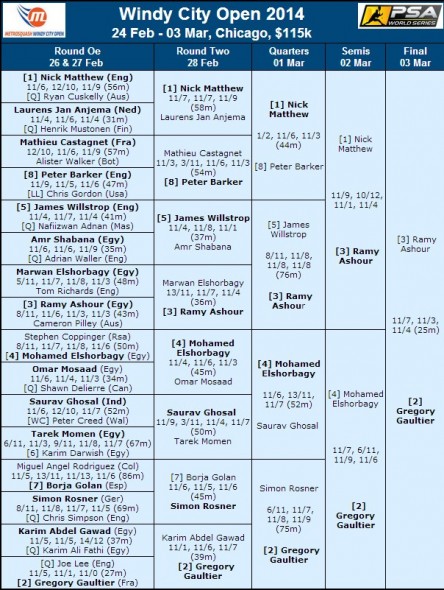 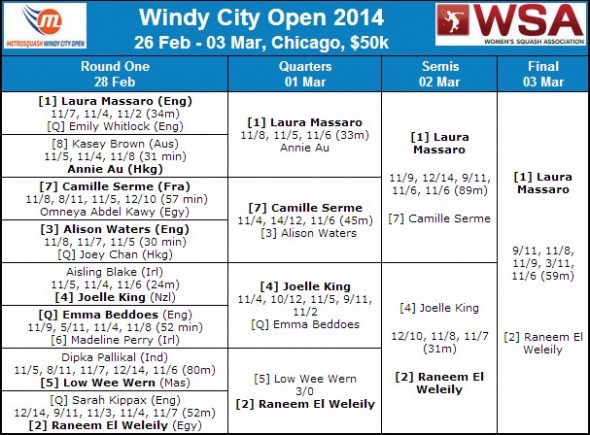