France’s top-ranked squash player Gregory Gaultier is hoping to fulfil a life-long dream when he leads his country in next week’s WSF Men’s World Team Championship on home soil in Mulhouse.

Hosting the championship for the first time in its 46-year history, France is seeded to reach the semi-finals – but, buoyed by a new world number two ranking, Gaultier is hoping to take his team to the final for the third time since 2003, and strike gold for the first time.

“It’s going to be nice to have the home support for once as we always play away,” said the 30-year-old on the eve of his eighth successive world team championship campaign since 1999. “I’m looking forward to be playing in Mulhouse as it is really close to where I started playing squash and I have all my family there.” 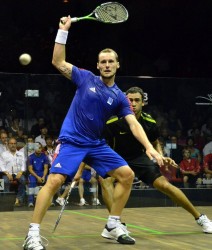 Gaultier has enjoyed a distinguished career on the PSA World Tour – notching up 23 titles from more than 50 final appearances and becoming the first Frenchman to win the British Open.

“I think a team event is nicer than what I am used to on the Tour, which is quite a lonely life. You play for your country and for your friends as well – but the preparation is the same in terms of having to get ready to compete and get the win for the team and yourself,” explained the former world number one.

The French squad will include Gregoire Marche and Mathieu Castagnet, ranked 29 & 30 in the world, respectively – and will be boosted by the return of Thierry Lincou, the 37-year-old former world number one and world champion who retired from the international circuit last year.

“Having Thierry in the team is a big bonus,” said Gaultier. “He is really experienced and is a role model for everyone.”

Gaultier has represented France with distinction in the world team championship – playing 34 times, with success in all but eight matches.

“Winning the world teams title would be a dream,” said the squad number one. “We failed twice in the finals but had a lot of good times and memories playing for France. Everybody will be up for it.” 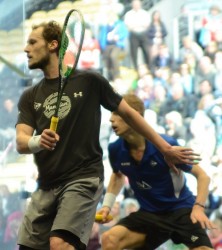 With success in the Swedish Open in February and runners-up berths in both the Tournament of Champions in New York and the British Open last month, Gaultier is enjoying an excellent runs of form.

“I’ve been playing well and am full of confidence.”

The 24th WSF Men’s World Team Championship will be held from 9-15 June in Mulhouse, at both the Espace Squash 3000 Centre and the Palais Des Sports – where action will take place on three all-glass showcourts, with stunning presentation assured.

Defending champions Egypt are seeded to retain the title after a projected final meeting with former champions England in what would be a repeat of the 2011 final.

The full pool line-up is as follows (with seeding in brackets):