World Champion Karim Abdel Gawad will become the new World No.1 in next month’s World Rankings after he beat fellow Egyptian Fares Dessouky to reach the final of the El Gouna International Squash Open World Series tournament – and he will face the man he will dethrone, Gregory Gaultier, in the title decider. 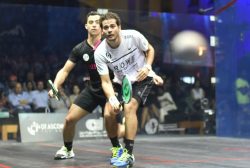 Gawad, who started the season ranked at World No.8, has been in sensational form over the past eight months, lifting the World Championship title, Qatar Classic title and Tournament of Champions title to surge up the rankings.

He required just a quarter-final finish at last month’s British Open to take top spot, ultimately losing to compatriot Mohamed Abouelghar in the round before, but held his nerve on the banks of Egypt’s Red Sea to recover from a game down against World No.9 Dessouky, beating the 22-year-old 7-11, 11-5, 12-10, 11-8 to become the fifth Egyptian to top the World Rankings. 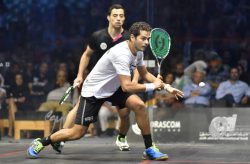 “Today is extra special for me, reaching the finals here in El Gouna in front of this amazing crowd is a great pleasure for me,” said Gawad.

“It makes me very happy. I didn’t want to think about it [the battle for World No.1] because I’ve been thinking about it a bit in the last two tournaments and it affected my way of playing so much.

“Today I just wanted to go on court, do my best and reach the finals here in El Gouna. Winning today is a great feeling. Tomorrow is another day, I have to keep my focus and I have to concentrate as much as I can.” 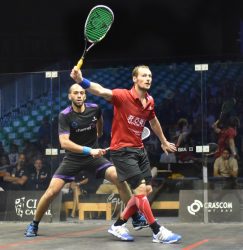 Meanwhile, Gaultier extended his unbeaten run to 18 matches, with a straight games win over Egyptian World No.5 Marwan ElShorbagy sending the 34-year-old into a fifth successive PSA World Tour final.

Gaultier’s incredible form has seen him lose just one match in 2017, with wins at the Swedish Open, Windy City Open and British Open over the past few months ensuring that he became the oldest World No.1 of all time in the PSA Men’s World Rankings for April.

And he will compete for a third straight World Series title after a 12-10, 11-4, 11-4 victory over ElShorbagy saw him through to the final against Gawad – the last man to defeat the rampant Frenchman in January’s Tournament of Champions final. 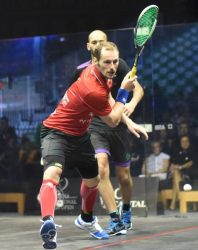 “I’ve been World No.1 before, for me it’s just a pleasure to be there and I’m not over the moon like the first time I became World No.1,” Gaultier said.

“All I care about is having a good time and having fun on the court, that is why I keep playing. The day I feel irritated or frustrated that I have to go back to training or if I don’t take pleasure on the court then I will stop. I’m still hungry, I still want to win more titles and I still have something left in the tank to do good things before I put the racket into my wardrobe.”