To Yemisi Olatunji, the game of squash is everything. A game she only stumbled upon while trying to discover her path in life as a young girl in Akure, South-Western Nigeria but one more thing will be the icing on the cake.

She is one of Nigeria’s best female squash players. The 27-year-old is currently placed 143 on the PSA World Rankings and dreams of competing in the Olympic Games.

“Squash wasn’t my first sport, ” she says. “I started with Lawn Tennis. I also tried track and field but didn’t find the fulfilment I was searching for, so I gave up to focus on my academics.”

She could easily have been one of the many lost talents that never reached their potential had she not found the sport. It was in 2004 when one of her church members who used to play squash in his spare time introduced her to some grassroots squash coaches.

“He took me to the squash court where I met Coach Ojo Aina Anthony and Coach Sadiat Akande. They treated me like their daughter and were very interested in my development.

“When I started, I was not consistent with training because my attention was divided with other engagements just to get my life going. But in 2006, I decided to stick to squash, that was the turning point for me.”

So energetic she was nicknamed “fire down” because of her doggedness and intensity while training. Most people around the training ground didn’t know her real name. In no time she became popular and sought after by more than four different states in the country.

Twelve years ago she participated in the Fembas Squash Open in Abeokuta where she won her first medal (bronze) in squash. She is grateful for that moment.

“My first victory in the game gave me a lot of hope. I felt like I could do something tangible with my life. I felt differently as people appreciated me for what I was doing. It was at the tournament that I met someone who paid for my senior secondary school certificate exam. She promised to do it and she fulfilled it.”

Now, Olatunji is completing an undergraduate degree in statistics at Yaba College of Technology, Lagos where she hopes to graduate soon but COVID-19 has stalled the progress.

Olatunji’s successful outing at the country’s National Sports Festival held in Edo State was notable, especially as she had to switch camps from Lagos to Delta State. She finished with three golds (single, doubles, and mixed doubles) and one silver in the team event making her the highest individual winner of medals in the sport.

Olatunji’s burst into the national team came following an impressive performance at the 2012 National Sports Festival held in Lagos where she won a gold and a bronze medal.

Olatunji was then invited to the national team trial in 2013 to prepare for the All Africa Squash Championship in Namibia.

“That was my first time in a national camp. We had about two to three trials. I beat all my opponents.

“No one saw it coming because I was the least expected player to make it to Namibia, but I became one of the most important players.

“I got to the quarter-finals in Namibia. It was fun. That first trip changed my life entirely.”

She has since represented Nigeria at international competitions such as Zimbabwe (2018) and Namibia Open (2019); PSA tournaments like Christvet PSA Open (Ipswich), Laight Music Granite Open 2019 (Toronto) among others.

History has it that the military was the first to develop a structure for squash by encouraging their personnel to participate in the game. It became regulated in 1974 when the Nigeria Squash Federation was formed to oversee all squash activities at the national, state, and club level in the country.

Olatunji and her sister have become household names in the country. Her blood sister, Busayo Olatunji, currently tops the ranking back home and keeps her on her toes. She is 211 on the global table.

The Olatunjis are the only women from Nigeria listed on the PSA World Rankings.

Their case is similar to the American tennis Williams sisters in terms of opposition: “Playing against my sister is always a war. We live in the same house but surprisingly we don’t talk about our games at home when we have a major coming up. We pretend like nothing is happening until we get to the match.”

“It is often interesting playing against her, and I’m happy with her progress.”

How much of an impact the game has had on Olatunji and her family cannot be over-emphasised. While Olatunji admits that the lack of Olympic recognition for the sport is a blow, she remains hopeful that one day she may walk out onto the Olympic stage.

“It is sad,” Olatunji says. Seeing some sports approved ahead of squash is a disappointment.”

“Maybe I would not have met all the people I have met today if I wasn’t doing squash. Also as a woman when nothing was going well for me. But squash gave me life.

“Having the game at the Olympics will change the narrative for everyone. More and more kids, especially females will know more about the game.

“I believe it will happen someday because playing at the Olympics will be a wow for me.”

Aside from the Olympics, Olatunji hopes to participate in the Tournament of Champions held in New York, the Allam British Open and other events as they come. 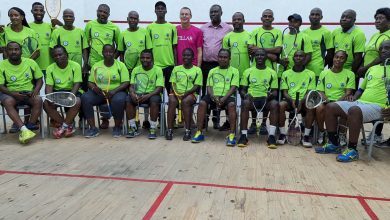