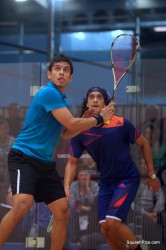 After scoring a significant upset in the second round of the AJ Bell PSA World Squash Championship inManchester, unseeded Kolkata-based Saurav Ghosal described the win as one “I’m not only doing for me, but also for India”.

Ghosal, who made history last year by becoming the first Indian ever to make the last 16 of the world championship, faced 15th seed Alister Walker, the world No15 from Botswana whom he had never beaten before. 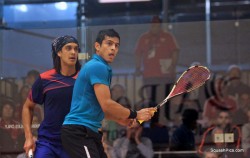 “I’m happy to win today – I played well in the first two games, I was controlling the pace and trying to make him play in my strength, and was taking as much as I could the ball to the back to go pass him and take the volley away from him – he is so good on the T,” explained Ghosal later.

“In the fourth, he had the confidence from winning the third. But I got it back and went 7-2 up – but it was a hard battle to try and close it off.”

When asked if he felt he could push through and make the last eight for the first time, Ghosal responded: “If I was able to do so, yes, it would be huge for India. Dipika (Pallikal) was the first ever to reach the quarters, but never has a male player reached that stage.

“And in my view, I’m not only doing it for me, but it’s also for India – for all those players that are coming after me. If my results can help and popularise the sport, then the impetus will carry on, and maybe one day, we’ll have 15 Indian players in the main draw of the World Champs.” 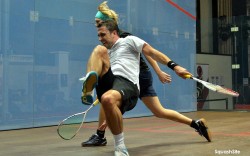 Ghosal, the world No17, will line up against fellow non-seed Henrik Mustonen, the 22-year-old Finn who celebrated his first ever appearance in the second round with a shock victory over England’s No7 seed and former semi-finalist Peter Barker.

Londoner Barker slipped midway through the third game after leading 2/0 – and, after losing the game, conceded the match as the result of a calf injury. 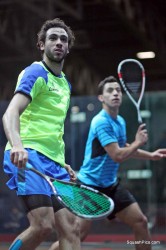 The top four seeds each progressed to the third round after straight games wins. Favourite Ramy Ashour, the world number one and defending champion from Egypt, despatched 19-year-old Egyptian qualifier Fares Mohamed Dessouki11-6, 11-6, 11-4 in just 23 minutes – the speediest win of the day.

“It was an incredible match, he’s playing incredible squash,” gushed the teenager who ousted experienced Scot Alan Clyneto make the second round. “He’s very talented and I played pretty good, not bad it was a very tough game. Actually it was very difficult to win six points in two games.

“I was coming to this tournament hoping to play with Ramy, to know how he’s going to play, how he’s acting inside the court. He’s playing pretty good and he deserves to be world number one. I think he’ll defend his title.” 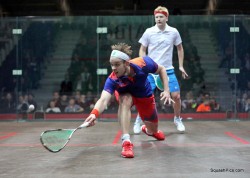 “Early rounds are not always easy, sometimes you feel that you’re not fully there and that was one of those today,” said two-time champion Matthew. “If I want to win I’ll have to play a bit better especially when the calibre gets a bit better but that’s the way you want it really.” 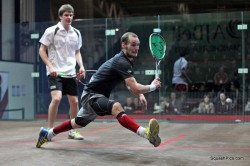 Second seed Gregory Gaultier faced one of the two qualifiers who reached the second round. The Frenchman took 32 minutes to overcome Australian Matthew Karwalski 11-9, 11-3, 11-5.

“Matthew played really well today, especially the first game, he was really sharp, playing fast and going for his shots – really impressive – so I was very happy to sneak that first game,” said the world No2 from Aix-en-Provence.

“I’m happy with the way I’m playing, there are a few little things I need to improve on my game but I played a lot of tournaments and I tried to recover from last week and I’m confident that you need to improve your game every match.” 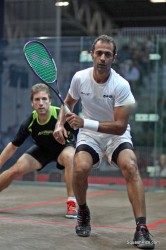 Egyptian maestro Amr Shabana, the No8 seed who is a four-time winner of the trophy, recorded a second impressive win in his first PSA World Tour event since March.

Rodriguez continued the form which saw him become the highest ranked South American of all-time earlier this year when he beat Hong Kong’s Leo Au 11-8, 11-5, 11-8. 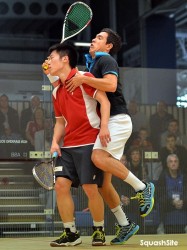 “This is THE tournament that stands out, it’s very different from any other, and it’s the one we all want to get to our peak for,” said the 27-year-old from Bogota who is now the first South American to make the world championship’s last 16.

“My season has been very long since the World Games – I had a fantastic week last week winning in Halifax, and I think I raised my game and I’m playing really well at the moment.

“Yesterday I played against Greg Marche – he is such a good player, we had a good match – and today, really happy to win in three.

“It’s the first time ever for me to get to the third round of the Worlds! My time is now. And I’m looking forward to playing Shabana tomorrow.” 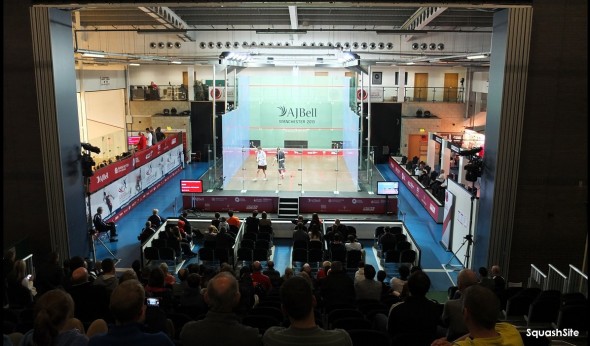