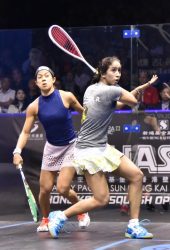 18-year-old World Junior Champion Nouran Gohar followed up her quarter-final victory over 2015 runner-up and World No.2 Laura Massaro with a brilliant performance to end World No.3 Nicol David‘s unprecedented 11-year winning-streak at the Cathay Pacific Sun Hung Kai Financial Hong Kong Open and secure a place in the final.

David had gone an astonishing 58 matches unbeaten at event a streak that extended back to the 2005 World Open, but came unstuck against a rampant Gohar, who utilised her ferocious power and attacking pace to outmuscle the Malaysian, who yesterday celebrated her 33rd birthday, 11-9, 11-7, 11-13, 11-9. 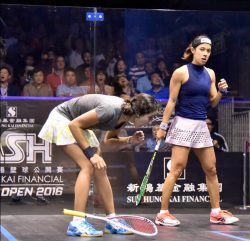 “I came here with no expectations and I just wanted to try and play well – so to be in the final is very pleasing.

“Nicol is a legend and she has been my idol since I was young but the Women’s Tour is becoming so competitive now. There is nothing between the top eight to ten players and it keeps getting harder.

“I was 2-0 up but both games were close and they could have gone either way. I really couldn’t believe it in the end.” 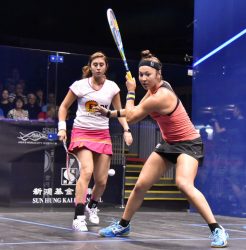 Gohar will now face American Amanda Sobhy in the final after the 23-year-old from Boston pulled off her own upset to defeat World No.1 and World Champion Nour El Sherbini courtesy of an ultimately emphatic straight games victory.

Sobhy came from 0-4 down in the first game to then save five game balls to take the opening game 12-10 and inflict a blow that 20-year-old El Sherbini couldn’t recover from as the American dominated the next two games.

“It took a little bit to get used to her pace at the start – she’s not World No.1 for nothing,” said Sobhy. 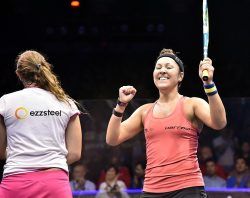 “At the start, I felt that I was just running and trying to retrieve, so I told myself to get into it, try and get the ball to the back and I’m very pleased with how I was able to come back.

“I think the first game was extremely important, given the fact I was 10-5 down. If she had won that game, it would have given her a lot of momentum, so the fact that I was able to win that, I think that the momentum shifted and I was able to build on a lot of confidence.

“I’m very excited to be in the final – it’s amazing to be in my second World Series final and my first in Hong Kong. I absolutely love Hong Kong and I usually do very well here, so I hope to keep the momentum going tomorrow and maybe do one better.” 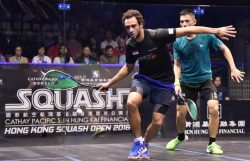 In the men’s draw home hero Max Lee‘s unexpected run finally came to a halt at the hands of maverick Egyptian Ramy Ashour, the three-time World Champion and 2010 and 2012 Hong Kong Open champion.

Lee had delighted the crowd inside Hong Kong Park Sports Centre to become the first home player in 31 years to reach the last four but he couldn’t stop a resurgent Ashour, who continued to play his unique blend of squash in a a 3-0 win, Lee visibly tiring in the final game after a valiant effort to reach 9-all in the second. 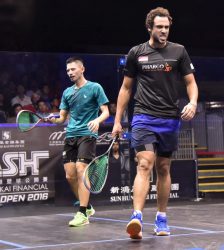 “Last time I was here, I got kicked out of the quarter-finals, so to be in the final is a great feeling,” said Ashour.

“Especially against a great opponent like Max, his squash is incredibly different and it took a lot out of me today.

“I’m happy with my performance, I’m glad that my body is holding up and everything is in place. I’m looking forward to playing tomorrow.” 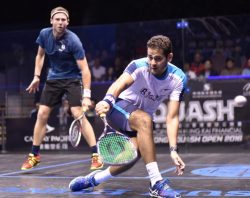 Ashour will face compatriot Karim Abdel Gawad in what will be the 25-year-old’s first ever appearance in a World Series tournament final after he downed Australian challenger Ryan Cuskelly.

“I’m so happy, I can’t describe the feeling,” said Gawad. 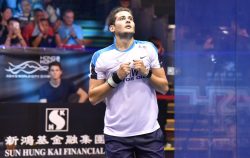 “I was in control during the first two games but then he came back very strong and he was probably in control for the third and most of the fourth. I just gave everything to try and win that fourth because I knew he was getting better an better and a fifth game would be good for him.

“It has been a tough tournament and so many players have gone out. I had never reached the quarters here before so to be in the final in a great thing, but I don’t want to get over excited either.

“There is still another match to play and I need to stay focused to come out and try and perform in that one.” 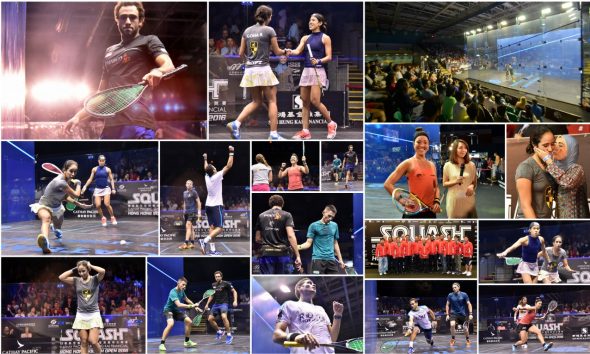