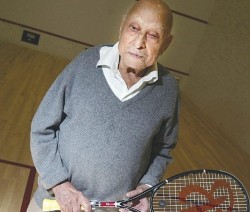 Hashim Khan, the father figure of modern squash, has died just a month after celebrating what was believed to be his 100th birthday.

Born near Peshawar in Pakistan (allegedly on 1 July 1914, but he never had a birth certificate), Khan led his country’s pre-eminent status in the sport in the 20th century. In the 1950s he won a then record seven British Open titles – his first in 1951 at an age when most players retire.

He moved to the USA in the 1960s and died at his home in Colorado on Monday night. He had been based at the Denver Athletic Club and was still dispensing advice from the gallery after he finally hung up his rackets aged 93.

“The world just lost the greatest player of all time,” Mo Khan, the youngest of Khan’s 12 children told Pakistan News International. “He’s going to be remembered for his sportsmanship and for what a wonderful man he was. He loved his family first and loved the game of squash and everyone that played the game. He was one of a kind.”

World Squash Federation N Ramachandran said: “After a wonderfully long and active life we are now left with memories of a great champion, a great man who has made a wonderful contribution to squash. Hashim’s passing has taken somebody so special from us. As we remember him we send our condolences and best wishes to his family at this very sad time.”