Fourth seed Barker had the packed crowd behind him all the way as he matched top seed Matthew’s pace and precision – and he’s hoping for the same support when he faces the 6ft 4in second seed Willstrop in the final of the PSA World Tour International 50 squash event at East Wintergarden.

The capacity crowd erupted as Londoner Barker clinched only his second career win over the man who has won the last three Canary Wharf finals. 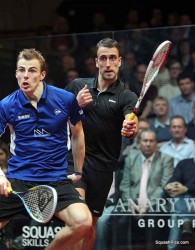 Barker had to fight back from 7-4 down to win the decisive fourth game in a pressure-cooker atmosphere.

The London-born world No8 was pumped up for the battle and clawed his way back into the game despite two video reviews going against him.

Playing at a phenomenal pace, both men fought toe to toe like gladiators as the majority of the London crowd willed Barker to win.

As he closed the gap, Matthew conceded two penalty strokes and Barker clinched victory with a dying length in the back left corner. 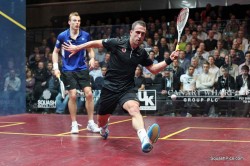 The 29-year-old left-hander had promised to go flat out this week and he finished strongly to take the first game 11-7. With Barker leading the second game 10-9, Matthew’s volley rattled the tin to give his rival a massive boost of confidence to top up the adrenalin coursing through his veins.

Barker led 5-3 in the third but Matthew, the 32-year-old from Sheffield, matched his opponent for aggression and took advantage of some desperate retrieving to finish off openings at the front of the court. 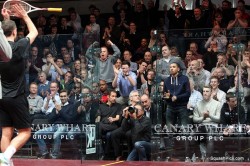 As Matthew – who boasted a 20-1 career head-to-head advantage going into the match – built a solid lead in the fourth, he must have hoped to take the match to five, but Barker’s determination and solid, constructive play helped him home in a dramatic finale.

The applause echoed round the packed arena for several minutes before Barker could begin his post-match interview.

“To put in a performance like that in front of a home like this is very special,” Barker told MC Alan Thatcher. 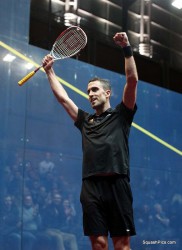 “Nick’s had the better of me so many times before – it’s good to get a win over him. He’s beaten me 20 times – and I’ve now got two wins!

“He is a great champion and you know you will have to give it everything to get a win,” added the world No8 who is now in the 21st Tour final of his career – but his first since the 2011 Canary Wharf climax.

“I’m pleased to have crossed the finishing line. Let’s hope I’ve got plenty in the tank for tomorrow.” 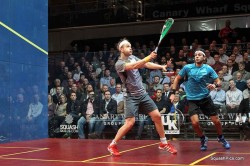 Willstrop, the world No4, hit back to beat Mohamed El Shorbagy after losing the first game to the big-hitting Egyptian.

From 4-4 in the opening game, El Shorbagy stepped up the pace and buried a flat-nick kill to win it 11-6, then punched the air in delight.

Willstrop, the 29-year-old from Leeds who was world No1 for 11 months of 2012, dominated the opening phase of the second game with a phenomenal display of controlled squash to build a lead of 6-2. 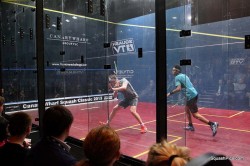 The No4 seed El Shorbagy clawed his way back – but at 9-7 he hit the ball out of court to give Willstrop game ball. El Shorbagy responded by slamming a flat kill but then hit the tin to give his opponent the game 11-8.

Willstrop continued to dominate in the third but after reaching game ball at 10-6 he hit the tin twice and conceded a penalty stroke before nailing a straight volley kill to win the game 11-9.

The fourth game was full of drama as 22-year-old Bristol student El Shorbagy moved 6-3 ahead before Willstrop tightened up his play to claw his way back.

El Shorbagy claimed only one more point as Willstrop turned the screw, clinching victory in 66 minutes of pulsating squash. 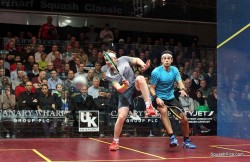 “There were some very subtle changes of pace, and at the highest levels it is a matter of subtle differences that can mean the difference between winning and losing,” said Willstrop.

“Mohamed and I have developed a great rivalry and respect and he beat me in the semi-finals of the World Championship to show how dangerous and talented a player he is.

“We have had lots of battles all over the world, including the semi-final here last year, and I am very pleased to get through to another final.

“I am happy with my movement and the way I am playing, but there’s another massive battle looming tomorrow in the final, where I will need everything to be working.”

Three-time champion Willstrop is celebrating his sixth Canary Wharf Classic final appearance since winning the inaugural event in 2004. It is also his second Tour final this month – he finished as runner-up in last week’s Kuwait PSA Cup – and the 36th of his career.