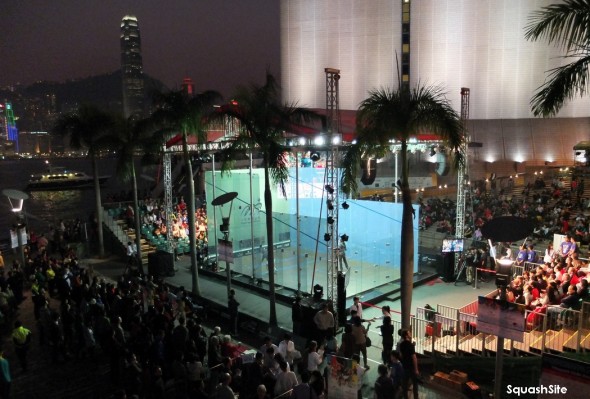 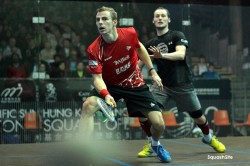 England’s World No.3 Nick Matthew outlasted World No.2 Gregory Gaultier in today’s semi-finals of the Cathay Pacific Sun Hung Kai Financial Hong Kong Open – the final PSA World Series squash event of the year – to give himself the chance to pip the Frenchman to the World No.1 ranking in January. 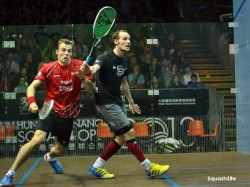 World champion Matthew, in the event’s final for the first time since 2004, will meet first-time finalist Borja Golan, the seventh-seeded Spaniard who beat England’s No.3 seed James Willstrop 11-6, 11-3, 11-9 in the earlier semi.

“I’m just so excited to be in the final,” Matthew told SportAsia later. “The last time I made the final in Hong Kong was a long time ago – there were black-and-white TVs,” joked the 33-year-old No.4 seed from Sheffield.

“I’m so happy I finally got to play here. It was great; I loved it. I’ve seen it and almost tried too hard to get there, wanted it too badly, so tonight I just tried to enjoy it, keep my focus and not look around too much because there’s a lot going on. 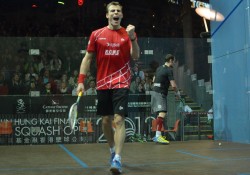 “This was my fourth very tough match in four days,” added the Yorkshireman, now in the 58th PSA World Tour final of his career. “I played the World No.10 in the first round and the one positive is that it got me into top-10 speed from the very first round. I’ve had to work very hard and sometimes that can be a blessing because you’re up to speed early.”

Of his prospects in the final, Matthew said: “Borja’s had an easier run, but credit to him. You have to be in the position to make the most of that. It has happened to me before. However, it’s not always the best thing because you’ve not been pushed enough. I’ll be sharp so hopefully that can play to my advantage.

“We played in Qatar in the semis and it was a really tough match. He’s got a wicked boast, he kills the ball in the front, so I’ll have to be very aggressive, move well and recover well.” 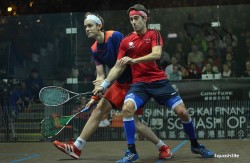 The 30-year-old from Santiago de Compostela went into the match 2/9 behind on his career head-to-head count with Willstrop – but former World No.1 from England survived the second longest match of his career less than 24 hours earlier when he beat in-form Mohamed Elshorbagy in 122 minutes, saving two match-balls against the 22-year-old Egyptian before clinching the deciding game 20-18. 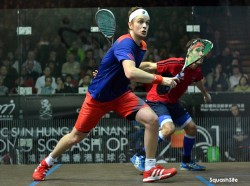 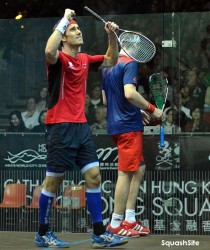 “Squash has many factors and I think James’s game with Mohamed was one of the factors,” Golan continued. “James was struggling a bit with his movement and I knew that I had to play an attacking game to the front. I thought if I played to the back that I might lose that match so I had to be risky and go to the front and it worked so I am really happy with that.

“Playing in a location like Hong Kong is amazing. It was full of people and the conditions are good. The court is unbelievable and it’s an historic moment for me so I want to enjoy tomorrow now.” 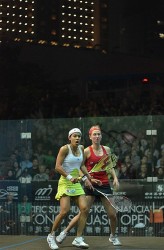 World No1 David, going for a remarkable ninth successive title in Hong Kong, recovered from a game down to beat No4 seed Waters 9-11, 13-11, 11-7, 11-7 in 58 minutes in the WSA World Series Gold event on an all-glass showcourt at the Hong Kong Cultural Centre at the Hong Kong harbour. 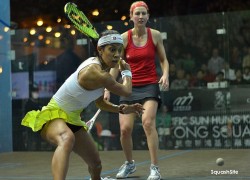 “To equal Sarah in anything is always an accomplishment for me,” David told SportAsia. “She’s so respected and she’s done wonders for women’s squash. She’s one of my role models as well, so to actually equal what she’s done is really a feat for me.”

Fitz-Gerald, 45, expected David to not only go on to beat her record but also reach at least a century of finals.

“She’s done magnificently well and I expect her to go bigger and beyond that,” said Melbourne-based Fitz-Gerald, who won five World Open titles among her 62 WSA titles.

“Knowing her, she’d be looking at 100 and probably 120 or so. Good on her. She’s a great little champion and a fantastic ambassador for squash,” added the Australian.