In only their third appearance in the event, India ensured themselves a top eight finish in the WSF Women’s World Team Championship for the first time in Nimes after beating Netherlands today in a dramatic last 16 round tie in theWorld Squash Federation event being staged in France for the first time.

The event boasts a record entry of 26 nations and is being staged simultaneously at both the eight-court Club des Costières and La Parnasse Arena where, for the first time ever, action is taking place simultaneously on three all-glass show courts. 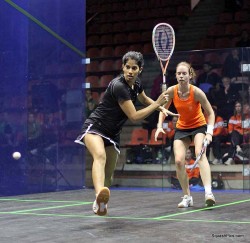 It was after defeating Argentina and upsetting Ireland in the pool stages that tenth seeds India today defeated Netherlands, the No8 seeds, 2/1.

Dipika Pallikal went on next against former world No2 Natalie Grinham. From the outset, the Dutch champion was firing from all cylinders. Grinham used her drops and lobs to great effect to win 11-8, 11-4, 11-3 to level the tie. 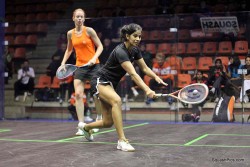 In the decider, second string Joshana Chinappa dropped the first against a determined Dutch assault from Orla Noom. At 2/1 down, Chinappa returned to the court with renewed confidence and dropped just five further points to clinch a historic 5-11, 11-9, 8-11, 11-2, 11-3 win after 51 minutes to take India into the world’s top eight for the first time.

“I had a game-plan, but I was a bit slow in the first two games, I was struggling to get used to the court,” admitted the jubilant 26-year-old from Chennai afterwards. “I’ve played Orla lots of times, but haven’t beaten her for six years – and that was definitely on my mind.

“Once I got my confidence, I felt much more comfortable. I didn’t think about the significance of the match from the team’s point of view, I just wanted to win.

“It’s awesome to be part of the team which has got into the world’s top eight for the first time – but I’m looking forward to taking it one step forward,” added the world No32.

India national coach Cyrus Poncha was overjoyed with the achievement: “It’s been a brilliant year for Indian squash – which started with reaching the U21 World Cup final, then third place in the world junior boys, and now in the women’s top eight for the first time.” 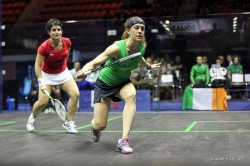 There was disappointment later for the hosts when France, bidding to make the last eight for the second time in a row, went down 3/0 to Ireland.

“I just had to put my head down and focus,” said a delighted Perry afterwards. “It was a bit weird with the crowd really – they were just more of a distraction than anything else. 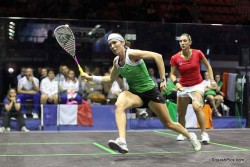 “It’s always a bit difficult when you’re playing for a team – I find myself thinking of so many things that I wouldn’t normally do when I’m just playing for myself.”

“In today’s match I did something to my foot towards the end of the fourth game, and that was a bit of a distraction – but soon put it out of my mind. When it happened, I thought, ‘oh no, not again!’.

“I didn’t play well against India, so it was good to get my form back again.”

New Zealand came from a match down to beat Canada 2/1. Unranked English-born Canadian Susannah King, making her championship debut, recovered from a game down – and saved two match-balls – to beat world No34 Kylie Lindsay 8-11, 11-7, 12-10, 7-11, 14-12 to put Canada into an unexpected lead. 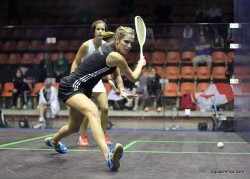 “It was quite nerve-wracking, particularly when Joelle went one down,” said NZ National Coach Paul Hornsby. “If you go by world rankings, it was heavily in our favour – but we got off to a nervy start. Fair play to Susannah, she played enough winners – but after the first game Joelle looked pretty comfortable.”

Hawkes added: “For me, the big difference between playing for yourself and for your national team like this is that I got really nervous before my game, watching the others – and had to go off and refocus. But I didn’t think I was ever going to lose that match.”

Defending champions Australia booked their place in the quarter-finals with a 3/0 win over USA. Australian team coachSarah Fitz-Gerald, the former five-time world champion, said: “I’m very pleased with our performance. We knew on paper we were looking good.

“We were a bit surprised that they dropped Grainger – but that worked in our favour. And now we’re expecting to meet Hong Kong – and we feel pretty good about that.”