After a day two count of 30 pool matches spread across five courts, Commonwealth Games Squash action moves into the knockout stages on Thursday in the Women’s and Mixed Doubles at Oxenford Studios in Gold Coast, Australia.

A crucial encounter in the Women’s event opened proceeding on the all-glass showcourt where top-seeded New Zealanders Joelle King & Amanda Landers-Murphy faced Aussie pair Sarah Cardwell & Christine Nunn, the No.8 seeds, in a match which the Kiwi world champions – after losing in Monday’s first pool match – had to win in order to progress to the knockout stage.

With King, the newly-crowned Commonwealth singles gold medallist, now in the ‘doubles zone’, the favourites took just 21 minutes to see off the home duo 11-8, 11-6.

“If we lost, we were definitely out,” conceded King afterwards.  “I guess we just wanted to come back and try and play better than we did yesterday – it was a pretty poor start from myself.  I had the afternoon off yesterday and was able to recover a bit more.

“Doubles is one of those games where it takes a little bit to gell – especially when you’ve been playing singles and you’ve got to try and switch over.  And we certainly gelled a lot better in that game.” 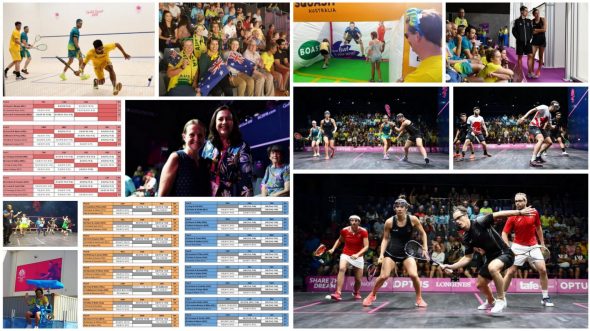 Squash Celebrates 20 Years of Sport & Legacy in the Commonwealth Games